If you ever wonder about what it’s like to drive a Mercedes-Benz Unimog, then this video offers the answer with a fantastic first-person view. Despite the vehicle’s immense size, a person doesn’t need a commercial driver’s license to pilot this beast on public roads in the United States.

Specifically, this is a Mercedes-Benz Unimog U500. Power comes from a 6.4-liter inline-six turbodiesel with 260 horsepower (194 kilowatts) and 700 pound-feet (949 Newton-meters). As a machine for off-road work as its primary focus, there are portal axles to lift the ground clearance, and the crawl ratio is an amazing 3,000:1.

The transmission provides one of the oddest parts of the Unimog’s driving experience. It’s an eight-speed manual, but there isn’t a H-pattern shifter. Instead, a handle rocks back and forth on the center console. 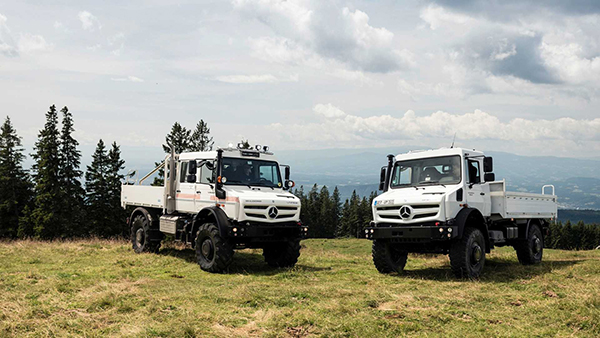 Operating the gearbox is an unfamiliar experience. After setting off roughly as normal, the handle functions as a pre-selector for the transmission. This means that a person nudges the lever forward to select the next gear, but nothing actually happens until the driver presses the clutch. Meanwhile, downshifts only require operating the lever without touching the clutch.

The Unimog sits very high so that the driver is eye-to-eye with folks in commercial trucks. Looking forward, the outward visibility is great because there’s an expansive panorama of glass. Seeing behind you is a bit more complicated because there’s no rear window, which forces the person at the wheel to rely on the mirrors.

While you can drive the Unimog on the street, this video makes it clear that the machine would really prefer to be off-road. At 35 miles per hour (56 kilometers per hour), the vehicle is already in seventh gear. Even in eighth, managing 60 mph (97 kph) seems like a real feat.