Mercedes-Benz Unimog has earned its reputation for being one of the toughest vehicles on the planet over the last several decades, working hard on farms, in the woods, and across fields all over the world. But Unimogs have become popular with enthusiasts as well, who have modified them in various ways. That includes this WEISTEC 1998 Mercedes-Benz U1550L, which is rumored to have once been owned by Arnold Schwarzenegger and used on his own farm in California. 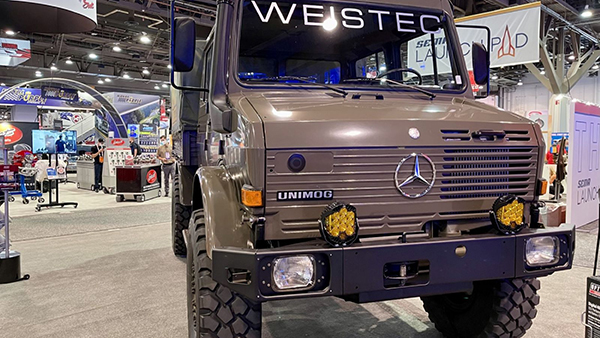 Regardless of its past, this Unimog took up residence at Optima’s booth at the 2021 SEMA Show, and by that, we mean it took up a lot of space. The medium-duty giant was joined by another M-B beast – the Bilstein 1973 Mercedes-Benz 416 Doka Unimog – at the 2021 Easter Jeep Safari earlier this year, where both proved their off-road prowess by conquering some hairy terrain.

Of course, the Unimog’s turbodiesel powerplant isn’t enough to make it fast by anyone’s measure, and Cam Douglas, director of marketing at Optima, notes that he refers to the speed it travels at as “Unimog time.” Regardless, the giant rig is capable of climbing over just about any kind of terrain, and slow is the way to go when it comes to off-roading. 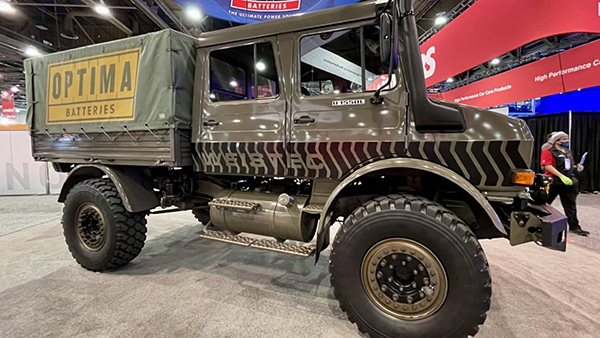 Douglas does note that in spite of its lack of performance, the Unimog “is an incredible vehicle that is extremely capable in any on or off-road activity.” That’s likely why the Terminator himself was so enthralled by it, in addition to its sheer size and presence. Optima says that Schwarzenegger imported it into the U.S. back in 2001, though that wasn’t an easy process at the time.

At that time, the Unimog wasn’t old enough to import as a motor vehicle, so Schwarzenegger had to bring it in as a piece of farm equipment. Luckily, it just so happens to fit that classification as well. After acquiring the massive rig, Optima gave it a fresh paint job prior to taking it off-road and bringing it to SEMA to serve as a giant billboard for its battery business. 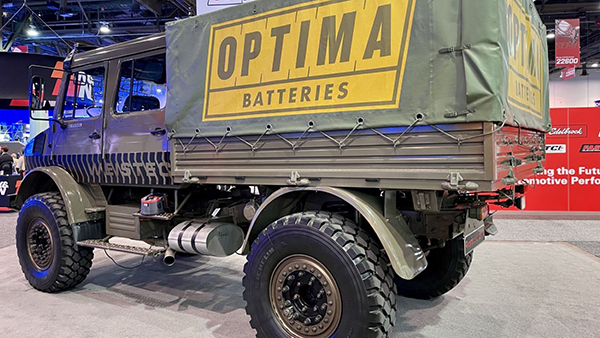 The Unimog has become extremely popular with enthusiasts in recent years not only for its sheer size and cool factor but also due to the fact that it doesn’t have any fancy modern computer-driven features – everything here is purely mechanical, just like all vehicles used to be.

Sure, it may not be practical for everyday use or even short trips to town, but the Unimog is something that we’d own in a heartbeat, especially if we had a big piece of land to drive it on. There just aren’t many vehicles in the world that can compare to this beastly Mercedes-Benz product, and that’s what makes it so darn appealing.