The Mercedes Unimog is the most hardcore off-roader in the world. And I was granted access to one of the two record-breaking Unimog trucks which drove up a mountain in Chile to an altitude of 6,000 meters. You need special training to drive one of these things properly so Mercedes gave me a driver to do my bidding. Thankfully he was up for a laugh and was willing to take the Unimog wherever I suggested. So we departed from the ‘official’ off-road course and went full rogue to see where we could actually take the 4×4 and whether we could get it stuck. Watch the video to find out what happened.

The Mercedes Unimog is an uncompromised off-roader that can handle any obstacle you can imagine. To put this to the test, Matt Watson took a ride in a Unimog at Mercedes off-road testing facility to see just how competent this machine really is. Even when the driver tries to get the Unimog stuck, there’s simply nothing that can stop this specialized off-roader.

The Unimog featured in today’s video was used to climb up mount Ojos de Salado in Chile and reach a summit of 6,694 m (21,962 ft) above sea level. This record-breaking climb was the highest altitude reached by a four-wheeled vehicle. The expedition was sent to install four emergency radios at high altitude campsites used by climbers. 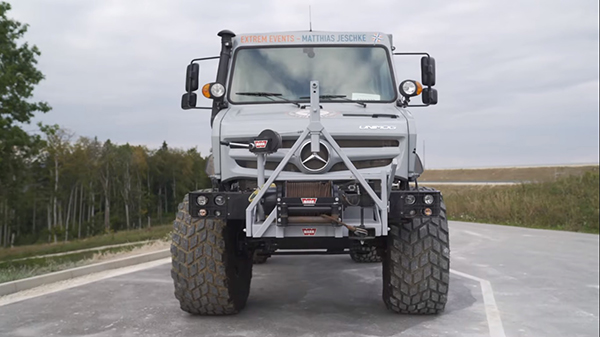 To prep the pair of U 5023 Unimogs for their expedition, massive winches were installed along with a clever front bumper system that allowed the Unimogs to modify their center of gravity. This unique system helped ensure the Unimogs would not roll backward on steeper parts of the trail.

When you think of Mercedes off-roaders like a G-Wagon may come to mind, but because the G-Wagon is a road vehicle it’s compromised. Much like a track-only supercar is the pinnacle of road-going engineering, a Unimog is the peak of off-road offerings at Mercedes. This massive truck is built to handle the toughest terrain across the globe and comes in endless configurations to support a host of applications. The Unimog is a piece of rugged work equipment first and an off-road toy second.

Today these record-breaking machines are still in use tackling the toughest terrain at Mercedes off-road testing center. To ride in one of the most accomplished off-road vehicles ever built and watch it tackle obstacles is a unique opportunity that we’re glad to enjoy via YouTube.