Lately, gossip in the off-road world has focused on machines like the Ford F-150 Raptor and Bronco, not to mention the likes of the Hellcat-powered Ram TRX. As such, perhaps now is a good time to remind the world that the Mercedes-Benz Unimog conquered mountains long before these vehicles were even on drawing boards in Detroit. The beefy off-road rig dates back to the 1940s, and it’s definitely gotten better with age.

For this adventure, we join the crew from TFLoffroad at Moab, where there’s an abundance of Jeep Wranglers and side-by-side runabouts on the trails. Literally standing above them all is this mid-1990s Unimog built by Couch Off-Road Engineering in Denver, Colorado. Since Mercedes doesn’t offer the Unimog in the States, the 25-year rule for importing applies and as such, this is among the newest Mercs available for modification. According to company owner Jay Couch, it’s preferable in many ways as this era Unimog is still very much an analog machine. It’s easier to build, easier to maintain, and as the video shows, it’s still very capable.

As for this particular rig, the engine is upgraded to approximately 320 horsepower (239 kilowatts) and 800 pound-feet (1,085 Newton-meters) of torque. It runs an eight-speed manual transmission with the low-range working gear group that gives first gear a ratio of 680:1. Additionally, all gears are reversible which means you can back up at 80 mph should you have the guts. For that matter, Couch says he’s had the Unimog up to 80 mph going forward, but it felt “unnatural” so a cruising speed of around 65 mph is better. Considering the off-roader has 19 inches of ground clearance and weighs 13,800 pounds, would you expect anything else? 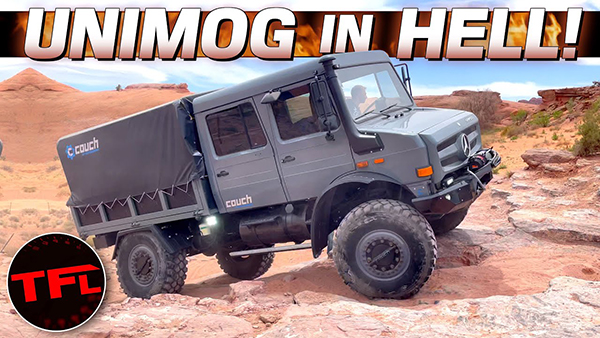 We’ll say this much – few people at Moab expected to see a Unimog tackling Hell’s Revenge. It’s a challenging slick rock trail filled with steep climbs and descents, sharp turns, and drop-offs that leave little room for error. Credit certainly goes to the Unimog and its capability, but there’s also a tremendous amount of driver skill required to safely navigate the course in a small off-roader, never mind something as massive as the Unimog. It looks impressive as hell from the outside, but honestly, some of the in-cab footage is straight-up terrifying.

In other words, this is an outstanding off-road machine driven by an experienced driver on one of the most extreme trails in the world. Grab some popcorn, click play, and enjoy the ride.