The 190SL was introduced in 1955 – the year Mercedes swept all before it on the Mille Miglia with the 300SLR. Indeed, the graceful, new two-door, convertible grand tourer was sold alongside the road-going version of the SLR – the 300SL – whose styling it strongly resembled. In fact, the underpinnings of the two cars were quite different and, while the 300SL had a purpose-built tubular spaceframe (W198), its smaller sibling was built on a shortened version of the ‘Ponton’ saloon (W121) platform, which was of a monocoque construction. The 190SL also boasted an all-new engine – an over-square SOHC straight-four unit of 1897cc that produced some 120bhp, which was sufficient to propel the car to a maximum speed of 112mph. The engine was coupled to a manual four-speed gearbox. The suspension comprised double wishbones and coil springs at the front and a coil-sprung swing axle at the rear. Steering was by recirculating ball and braking by power-assisted drums all round.

Mercedes-Benz made over 25,000 190 SL two-door luxury roadsters during the 1955-1963 production run, and only two percent of those were right-hand-drive. For the 1961 model year, 3,792 units rolled off the production line, of which 562 were in right-hand configuration. The shell featured in the gallery above and in the video at the bottom of the page was one of them, which earns it the much-coveted distinction of an automotive unicorn.

It’s a unicorn that has seen far better days, but it still sold at a unicorn-y price. Offered as a barn find and a most exciting restoration project by H&H Classics, this 1961 Mercedes-Benz 190 SL was bought by the seller in 1989, so it’s been off the road for at least 33 years. Even then, it was not in top-notch condition, as the seller and her father bought it specifically to restore it. The father had experience with 190 SLs and was going to use it for this father-daughter joint project.

The car was rolled into a garage where work should have started right away. Other projects kept pushing this one farther down the line, and by the time the duo went to check in on it, the engine, the gearbox, and the rear axle (and possibly other, smaller stuff) were missing. The seller told the auction house that employees at the garage had taken apart the car and sold off the parts. 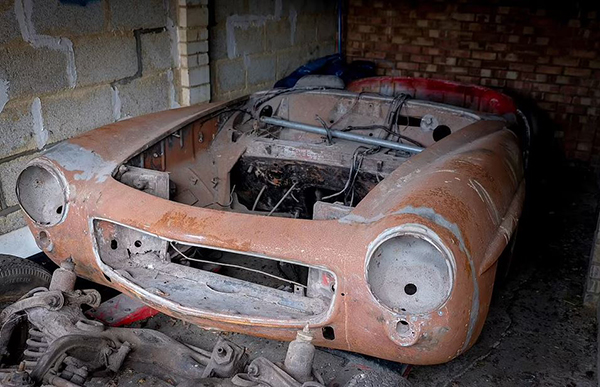 As some form of belated damage control, the seller moved what was left of the 190 SL into dry storage, where it would remain for more than three decades. When she eventually decided to sell it, so it could “return to its former glory in her lifetime,” it looked like this: a disassembled rustbucket missing the heart but still with original parts.