The Mercedes Benz S-Class W140 gets new rear arches and the front arches get wide, too. In combination with the 12″-wide wheels made by OZ and an air ride, it creates the perfect Mafia look. All black slammed body and a V8 engine… nothing else to say. See the complete process with bending, grinding, and welding in the next 19 minutes.
Fun Fact: This was the video with the biggest filming effort and longest period on this channel until now.

A Mercedes-Benz W140 ditches elegance for the Mafia look. It happened in Germany, where the owner, Ralf, wanted something different with his sedan. Now the car is unrecognizable.

Ralf took his Benz to Meister Megerle, a workshop specialized in custom work. The team started bending, grinding and welding. The experts fitted new rear arches on the model and extended the front ones as well to make room for larger wheels. They thus put on 12-inch OZ units and an air ride that allows the Mercedes to sit closer to the tarmac.

The angular-shaped Mercedes of the early 90s sedan turned from a smart family sports sedan to one for the Mafia, as the channel reps claim. It was just what the owner requested. Some may say that the makeover is a blasphemy that ruined a classic. Others would contact the creators to get their own transformation. All would turn heads when spotting the Mafia Mercedes-Benz W140 in the street. 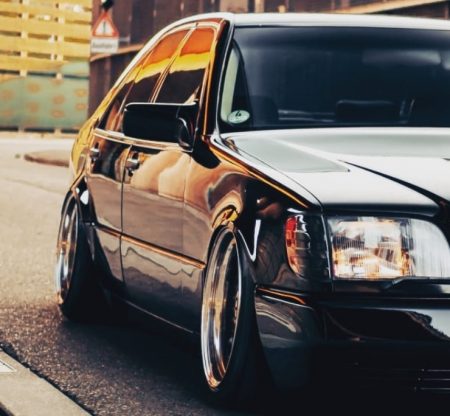 The car was supposed to be revealed in September 1989. But when introducing the new 7 Series, BMW also offered a V12. It was a party that Mercedes couldn’t miss, so they went for the “Better later than never” principle. This delay gave them enough time to develop a V12 and to make room for the massive power plant in the engine bay.

June 1993 brought a move that was going to set standards in the luxury segment for decades to come. Regardless of the body style, all Mercedes-Benz W140 variants became S models.