Even though the glory days of the sedan are long gone, a new S-Class remains a big deal when it comes to innovative features. Judging by what Mercedes has revealed so far, the W223 will be no exception, despite the exterior design being more of the same. Ahead of its September 2 official premiere, the fullsize luxury sedan has been spied on the streets of Germany without much camouflage.

Only the areas around the headlights and taillights are disguised, along with the three-pointed Mercedes star at both the front and rear. If the prototype looks quite familiar, that’s because another test vehicle (see the gallery at the end) was spotted by our spies about a month ago, but with two changes. While the two-tone alloy wheels this S-Class had are nothing to write home about, we do notice the car featured traditional door handles.

Those nifty electronic pop-out handles will be an optional feature and are going to help Mercedes’ flagship car boast an impressively low drag coefficient of just 0.22. The areas covered are not that big of a secret seeing as how the Daimler brand revealed the front fascia in full towards the end of May in a teaser photo. As for the rear, it was caught fully exposed earlier that same month, showing wide taillights similar to those of the CLS and with a chrome bar extending over the entire width of the derrière.

All that’s left is for Mercedes to remove the very little camo this prototype still had and show the all-new S-Class in full. That will happen in precisely two weeks from today, but we’re hoping to learn more about the W223 in the coming days. The generation change is expected to spell the end of the two-door models since the S lineup will likely go sedan-only by not renewing the coupe and cabriolet. 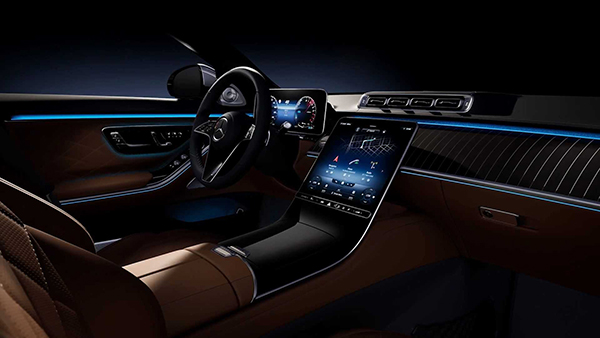 We’re curious to find out whether the opinion-splitting interior will impact sales in a good or a bad way. Prepare to see it in more cars since the electric EQS due in 2021 will have largely the same arrangement. The next-generation C-Class was recently spotted in wagon flavor with a somewhat similar layout of the center console, suggesting the lesser Mercedes models will also adopt the heavily reworked dashboard.