‘The requests for Hyperscreen are overwhelming in all markets,’ Markus Schäfer, Mercedes CTO told CAR at CES 2023. ‘We are totally blown away by the take rate of the Hyperscreen. It’s a very expensive thing, it costs thousands of euros, but people want it,’ he adds. He later admits that more people want Mercedes’ ultimate version of MBUX than the company originally predicted or planned for. 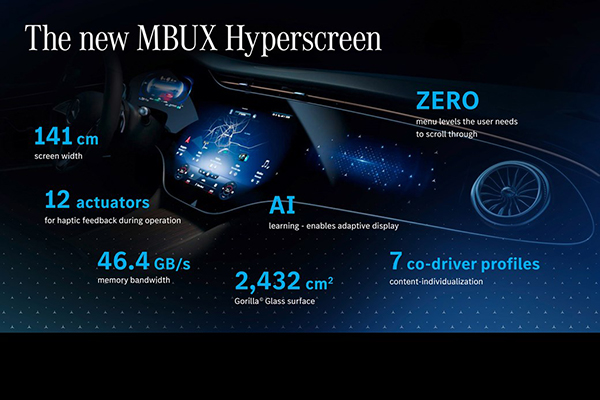 So what is Mercedes-Benz MBUX Hyperscreen and why could it be the most divisive bit of car interior technology yet? And more importantly, is it any good? Keep reading to find out.

What is the MBUX Hyperscreen?
At 141cm wide, with technically three screens under one massive curved glass panel – the Hyperscreen boasts impressive technical specifications: eight CPU cores and 24GB of RAM is comparable to some high-end home computers, and there are super-fine haptic actuators for tactile responses to your inputs.

Hyperscreen’s chief innovation is a greatly expanded digital ecosystem. In plain English, that basically means this version of MBUX is more than just a media player and navigation system. It has artificial intelligence (AI) that learns your habits; if you commute to the same place every day, it will soon pre-load the route and warn you of traffic problems ahead. If you’re in the habit of calling someone at a specific time, it’ll suggest making that call again at that time the next time around. And you can pre-load all of these little details about yourself to other cars with the same MBUX system – with the EQE being the next to get this set-up.

All of this is locked away, however, if you don’t have an active Mercedes Me account. Key in a PIN, or touch a pad with your fingerprint, or get your face recognised by the car’s cameras, and it’ll load your preferences. You can even tell it your height and it’ll change the seating position instantly; the position was bang on in our EQS demo car, although it felt completely wrong in the S-Class we tried it in previously.

Hyperscreen’s unique features include a display for the passenger. It remains dormant behind a screensaver when the seat is empty, but has an entirely separate system for the front occupant to take advantage of without distracting the driver. There’s an internet browser, even allowing them to play YouTube videos, and if the car sees you watching the video from the driver’s seat while the car’s in motion it’ll dim the brightness to stop the potential distraction.

But all of this next-generation technology isn’t cheap – as you’d expect from Mercedes. A Hyperscreen is an obscenely pricey option on the EQS: £7995 in the UK on top of £100k minimum for the car itself.

MBUX Hyperscreen: how it works

MBUX Hyperscreen: does it work?
Yes, but whether you like it or not really depends on the sort of user you are. After spending several days with MBUX in an EQS, we had mixed feelings about the new system.

Whatever you think of in-car infotainment or technology, it’s a sight. During the day – and especially at night – the Hyperscreen bathes you in a blue-ish glow, offering a wide range of information and settings at your fingertips. It’s the future in 2023. When combined with Mercedes’ ambient interior lighting, it’ll make your journey up the M1 feel like a deleted scene from Avatar 2.

We didn’t spend enough days in the EQS to see the benefit of the Hyperscreen’s machine learning tech, but we can say it’s already easier to use than some other systems on the market. Take the air conditioning for example: on the Volkswagen group system, changing the A/C involves either using a blank capacity bar or clicking through screens – in the Mercedes there’s a persistent set of dials that are easy to tap whatever else is happening on the screen. This is contrast to other cars which hide simple settings behind layers of menu – not intuitive, and not ideal when you should be looking at the road.

Brands are starting to move away from displaying as much information as possible – just check our CES report where Schäfer also admitted we’re not that far away from needing a silent mode in car infotainment – but this is a technically incredible piece of kit regardless.

Less impressive, however, is the integration with Apple Carplay. Where some systems will have CarPlay front, centre and accessible, the Hyperscreen wprefers to tuck it away. To get to Carplay, we found ourselves selecting Media and then clicking on a Carplay tab just underneath. Other cars make this easier, though it’s probably because Mercedes wants us to use its own software, rather than Apple or Google’s.

So is it worth it? That depends on you. The ‘regular’ My MBUX system can do 90 per cent of what the Hyperscreen can with the standard portrait screen, so it is a bit superfluous. However, if you’re a tech person then it’s a must-buy regardless.