Mercedes’ new MBUX Hyperscreen seems like the physical manifestation of something a scoffing technophobe would say about the growing size of in-car infotainment: ‘WhAt’S nExT? A wHoLe dAsHbOaRd mAdE OuT oF tOuChScReEnS?!’ Well, yes. It’s that.

Of course, there is more to it than that. In a world of bigger is better, Mercedes can happily brag about the Hyperscreen’s size: it’s 141cm wide, even if it’s technically three screens under one massive curved glass panel. But it’s not just size – Mercedes highlights some wild technical specifications for this latest interface: eight CPU cores and 24GB of RAM at its disposal is comparable to some high-end home computers, and there are super-fine haptic actuators for tactile responses to your input. 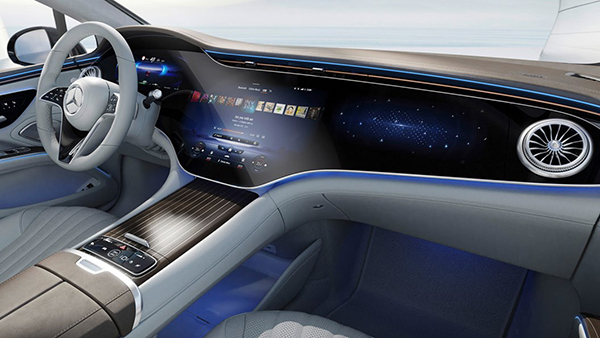 More details on the MBUX Hyperscreen here
Hyperscreen’s chief innovation is a greatly expanded digital ecosystem. In plain English, that basically means this version of MBUX is more than just a media player and navigation system. It has artificial intelligence (AI) that learns your habits; if you commute to the same place every day, it will soon pre-load the route and warn you of traffic problems ahead. If you’re in the habit of calling someone at a specific time, it’ll suggest making that call again at that time the next time around. And you can pre-load all of these little details about yourself to other cars with the same MBUX system – with the EQE being the next to get this set-up.

All of this is locked away, however, if you don’t have an active Mercedes Me account. Key in a PIN, or touch a pad with your fingerprint, or get your face recognised by the car’s cameras, and it’ll load your preferences. You can even tell it your height and it’ll change the seating position instantly; the position was bang on in our EQS demo car, although it felt completely wrong in the S-Class we tried it in previously.

Hyperscreen’s unique features include a display for the passenger. It remains dormant behind a screensaver when the seat is empty, but has an entirely separate system for the front occupant to take advantage of without distracting the driver. There’s an internet browser, even allowing them to play YouTube videos, and if the car sees you watching the video from the driver’s seat while the car’s in motion it’ll dim the brightness to stop the potential distraction.

But all of this next-generation technology isn’t cheap – as you’d expect from Mercedes. A Hyperscreen is an obscenely pricey option on the EQS: £7995 in the UK on top of £100k minimum for the car itself. 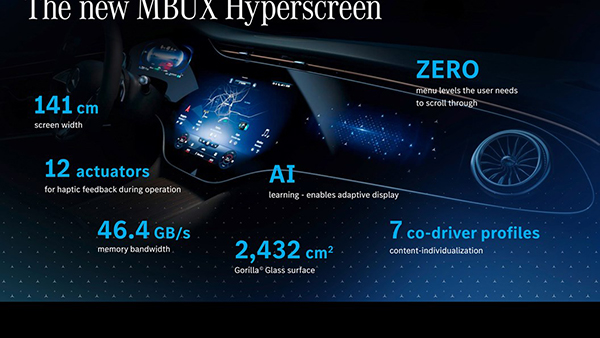 MBUX Hyperscreen: how it works

Get comfy
Fiddling with seat adjustment sliders is over – tell the EQS your height and it adjusts automatically for you.

Get entertained
Passenger display wakes up when seat is occupied – you can even watch videos without disturbing the driver.

MBUX Hyperscreen: does it work?
Yes. But is it worth it? We’re not quite so sure. The ‘regular’ My MBUX system can do 90 per cent of what the Hyperscreen can do with the standard portrait screen. Entirely clever it may be, but it seems a little unnecessary.