I’ve Been Lying for Years, Mercedes is Actually Better Than Toyota

Because that’s what it is. The famous YouTuber with a knack for telling others that they’re not the brightest if they choose certain brands isn’t falling in love with Mercedes-Benz. He’s not betraying his core philosophy that prompted him among the most-watched channels on the video platform.

But it’s extremely funny to watch the man talking about the sports car. He gets right on it, after saying he’s “been lying for years” about his stance on reliable cars. He points out the new owner of the Mercedes is a friend of his that bought it for $25,000 after it was driven for around 15,000 miles (24,100 kilometers). Mind you, the original cost of the German car was over $60,000. But Scotty Kilmer is very confident the SLK could still run a lot more miles.

It doesn’t take long before he adds that you could get one too if you’re a “gambling man.”

The mechanic with a YouTube channel side hustle says the sports car is beautiful and has a lot of technology on it, but points out the driver had to install a down-facing front camera to not “smash the expensive piece of plastic that’s the front” of the Mercedes. 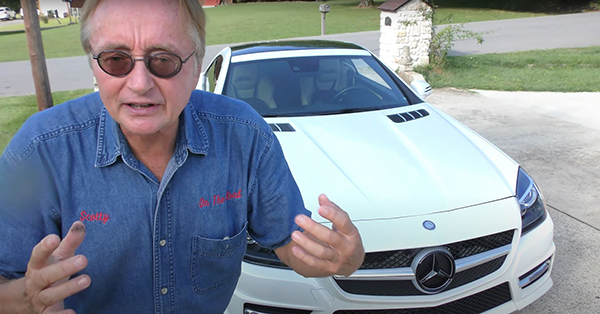 Scotty Kilmer continues and says these kinds of cars are not for mechanics, but for people that have an “awful lot of money.” He says 34 mpg is an impressive fuel efficiency rating for a car that goes this fast.

He somehow manages to compare the SLK to a Willys Jeep, and shows the roadster folding the hard top by using “the magic of German technology.” His sense of irony is easily identifiable at this point.

But people didn’t really agree with the mechanic, especially as he starts to even joke about BMW’s new motorcycles and cars. A lot of viewers said their old Mercedes-Benz vehicles still run smoothly and don’t have a lot of problems. If you’re an owner, you can tell us what you think about this down below.

In the end, Kilmer gave us a late April Fool’s joke, but he also provided entertainment for those that like car-related content.