Throughout its history, Mercedes has had some spectacular special editions. Before we get stuck into the rarest and most expensive, there are three main areas that these special editions come from. There’s Mercedes-Benz as a prestige automaker that leans into the brand’s heritage for quality and luxury while not forgetting its long, successful history in racing. And then there’s Mercedes with AMG for building powerhouse race and road cars. The ultimate in Mercedes prestige is its Maybach brand, purchased by Daimler-Benz in the 1960s and now the makers of Rolls-Royce level ultra-luxury machines. But if you’re after the creme de la creme of Mercedes performance, you want the models built from the ground up to be AMG derivatives, not Benzes.

Now that we’ve given you the basic rundown of how Mercedes operates, it’s time to dig in on the coolest special editions from Mercedes. 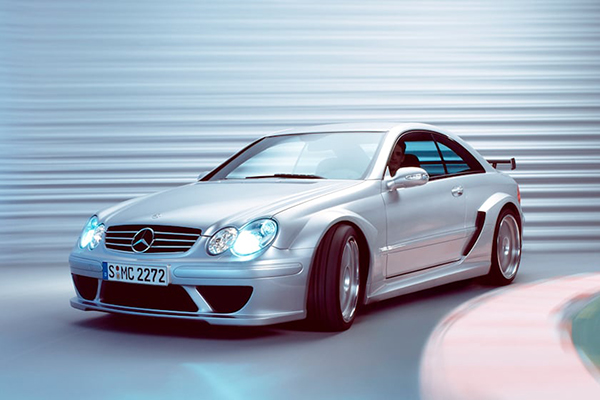 1. Mercedes-Benz CLK DTM AMG (180 Built)
A smooth drivetrain, a forgiving suspension, a luxurious interior, and the latest in safety tech is a list of things the CLK DTM AMG Coupe didn’t have. It was a limited edition celebration of the race car that won the German Touring Car Championship in 2003. Mercedes built 100 coupe models for 2004, featuring a modified version of the SL 55 AMG’s 5.4 liter V8 making 582 hp and 590 lb-ft of torque, race-bred adjustable coil spring suspension, and a multiple-disc limited-slip differential at the rear axle. Inside, there’s lots of carbon fiber reinforced plastic (CFRP), including the seats with their four-point safety belts. The following year, Mercedes sold 80 Cabriolet versions because, well, people would buy them. Now, they go for crazy money. If you’re looking for one of the first modern ‘race cars for the road,’ this is a strong contender for that title. 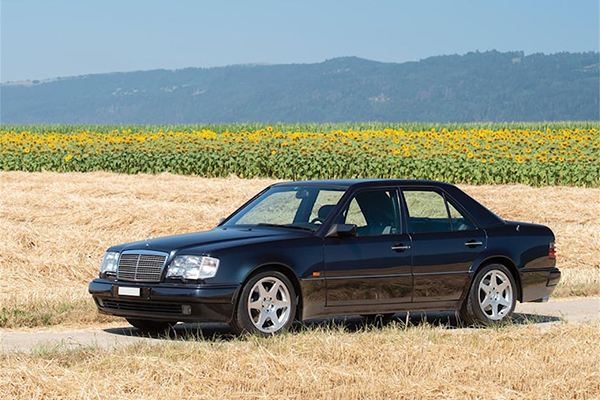 2. Mercedes-Benz E 60 AMG (148 Built)
In 1994, Mercedes showed the fruits of an odd partnership with Porsche to create a high-performance version of the W124 generation E-Class. Mercedes had its technical departments working on the next S-Class, and Porsche needed the money and production space at the end of the 1980s, so a legend was born. Porsche redesigned the chassis to fit the 5.0-liter V8 from the Mercedes SL. Porsche redesigned the suspension and other parts of the car, then built it. The press referred to the 500 E as the “Wolf in Sheep’s Clothing,” and it became an autobahn legend. A little over 10,000 were built, making it a powerful and rare car beloved by enthusiasts.

Then, AMG stepped up to the plate and dialed the crazy up to 11. The 5.0-liter engine was swapped for a 6.0-liter lump, and AMG refined the suspension and added a twin outlet exhaust system and the brand’s iconic EVO-II 17-inch alloy wheels. Known as The Hammer, the E 60 AMG hid 375 horsepower and a bucket of torque under the hood and could give Ferraris of its era a run for their money. Under 150 were built to sell, and the best estimate is that Mercedes, Porsche, and AMG worked together to build 148. 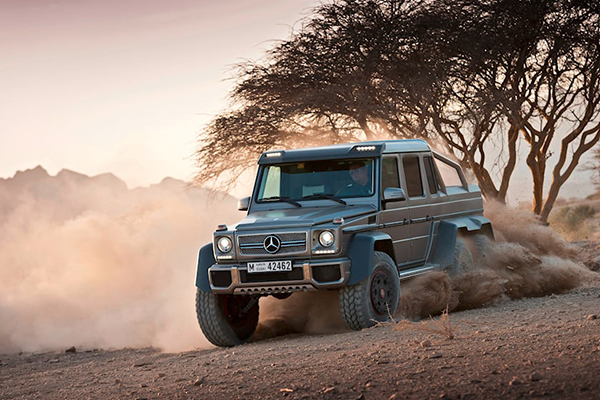 3. Mercedes-AMG G 63 6×6 (100+ Built)
It has never been revealed exactly how many of the Mercedes-AMG G 63 6×6 were made. What we do know is that it cost well north of half a million dollars and was utterly bananas. With six-wheel drive, 18 inches of ground clearance, an AMG 5.5-liter V8 bi-turbo engine, and state-of-the-art suspension and differentials, it could declare war on just about any terrain the driver pleases. The AMG engine makes 560 lb-ft of torque and 536 hp but, comically, has a Controlled Efficiency mode to help conserve gas. It even has a tire pressure control system built in, so you don’t have to leave the luxury of the cabin to air up or down on soft sand. 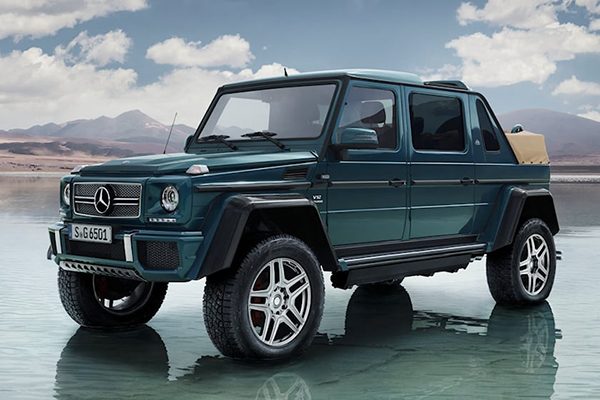 4. Mercedes-Maybach G 650 Landaulet (99 Built)
If you’re of the opinion Mercedes is incapable of being tasteless, you’re wrong, and the 2018 Mercedes-Maybach G 650 Landaulet is proof on four wheels. And, if you think it looks like the AMG G 63 6×6 with an axle missing, you’re correct. Mercedes made a 4×4 version and lifted it even higher while extending the wheelbase by 22.8 inches to create the ultimate luxury off-roader for the one percent. The back of the roof is converted to a power-operated soft top, and underneath it is the first-class cabin-style rear seats from the S-Class. That’s not enough absurdity for our more prosperous and betters, though, so under the hood is a 621-hp twin-turbo V12 engine. 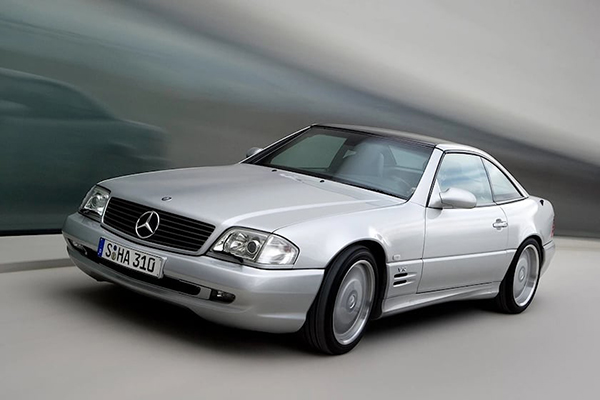 5. Mercedes-Benz SL 73 AMG (85 Built)
Much more to our style, if not our wallets, is the 7.3 liter V12 powered SL 73 AMG built in 1998. You couldn’t just order your SL with the same V12 that later went in the Pagani Zonda, and, for the record, the SL 73 AMG is rarer than a Pagani Zonda. You had to buy a Mercedes-Benz SL 600 and then give it to AMG for your 518 hp and 553 lb-ft. For your money, you got an SL back that could tap 60 mph from a standing start in 4.6 seconds and go on to knock on the door of 200 mph. It was a semi-official conversion as AMG wasn’t officially part of the Mercedes fold in 1998, but rich people wanted more and more power in their 1990s SLs. The car doesn’t appear in official sales brochures or price lists; hence so few were built. 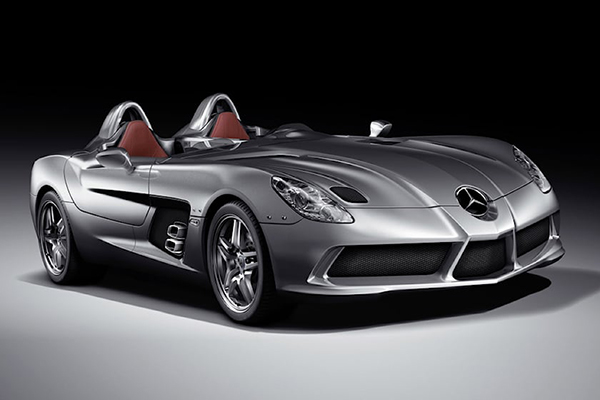 6. Mercedes-Benz SLR Stirling Moss (75 Built)
Before Mercedes pulled out of racing after the devastating crash at Le Mans in 1955, the 300 SLR dominated racing. In 2009, Mercedes paid homage to that car and British racing legend Stirling Moss. Based around the outgoing SLR Roadster developed with McLaren, the 75 SLR Stirling Moss models used a 5.4-liter AMG V8 making 660 hp, with the speedster styling by Korean designer Yoon Il-hun, the interior by Dutch designer Sarkis Benliyan. The carbon fiber construction and speedster styling knocked 441 pounds off the weight of the original car. Only existing SLR owners could buy the Stirling Moss edition, which cost over a million dollars. 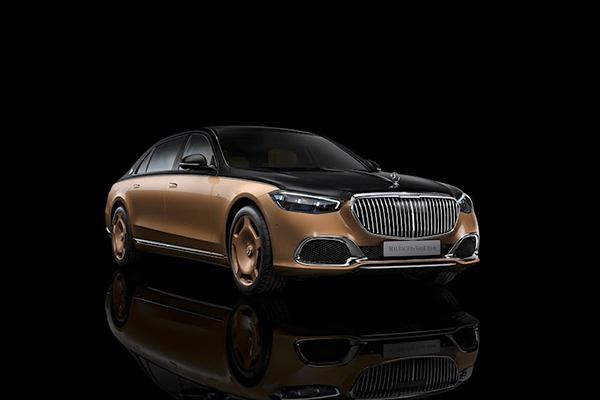 7. Maybach by Virgil Abloh (150 Built)
Virgil Abloh was an American fashion designer whose life was cut short at 41 by cancer. Before he died, he worked on the Project Maybach show/concept car and signed off on “a specially curated 2023 Mercedes-Maybach S-Class S 680.” Mercedes-Maybach calls this the final chapter of Project Maybach. 150 are to be built, with just 39 units coming stateside. The car features unique forged wheels; Obsidian Black paint over the top of the car with the rest in a special sand hue. The four-seat interior is trimmed in Nappa leather with leather-edged high-piled floor mats, and the Piano Black center console displays Virgil Abloh logos along with the rear cushions, headrests, and door sill panels. Also included are a 1:18 scale replica of the car, two car keys, and a carabiner hook. 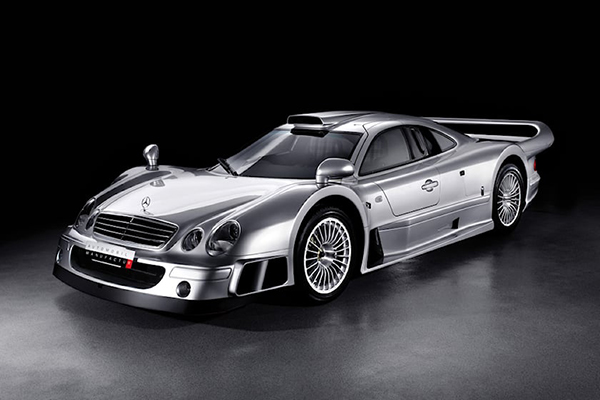 8. Mercedes-Benz CLK GTR Strassenversion (26 Built)
When Mercedes needed to homologate its late 1990s GTR race car built with AMG, it made its most hardcore Mercedes yet. The street version (Strassenversion) kept a lot of hardware from the race car, including the suspension, and the sequential transmission, and kept the carbon-fiber monocoque chassis. The 5.9-liter V12 was enlarged to 6.9 liters and made 612 hp with 539 ft-lb of torque. Huge six-piston calipers and carbon-composite rotors brought the CLK GTR Strassenversion to a stop, and ABS, air-conditioning, and an audio system were added. It became the most expensive production car during its 1998 to 1999 run and wasn’t exceeded until the Ferrari FXX-K came along in 2015. Of the 26 produced, six of them were even more exclusive roadster versions. Because why not? 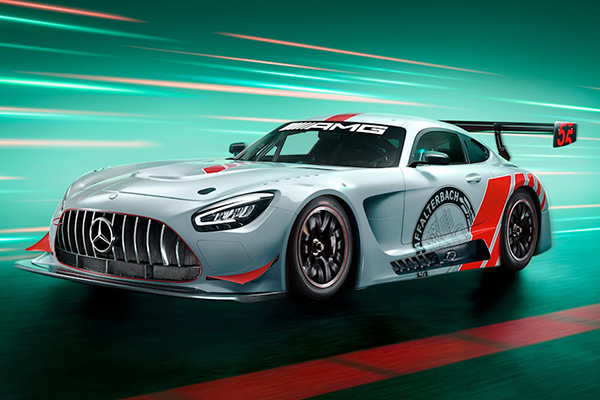 9. Mercedes-AMG GT3 Edition 55 (5 Built)
For its 55th anniversary, AMG produced five limited edition track versions of its GT3 race car. It came with a watch and a unique car cover, and because it didn’t need to comply with FIA regulations, the 6.2-liter V8 (yes, that 6.2-liter V8) engine was cranked to 641 hp – 100 horses more than the race car. Also included are diffusers, side skirts, louvers, a giant rear wing on the gray Manufaktur livery-painted body, and a silencer-free Inconel exhaust system. The stripped-down interior has a roll cage painted matte Anthracite metallic along with the rest of the exposed areas. The Bosch-sourced data display unit shows a special AMG anniversary boot screen.