13 years ago Avatar made movie history. This year the saga continues and we are excited to collaborate with the much anticipated sequel Avatar 2 The Way of Water.

Mercedes-Benz attempts to portray the “art of creating desire” with a strategic co-promotion campaign with the upcoming movie “Avatar: The Way of Water.” To kick things into gear, the car manufacturer released a very impressive-looking video, where their sustainable vision for the future intertwines with Pandora, the fictional planet from the movie.

The idea behind it all is to further promote Mercedes-Benz’s own vision of a fully electric future. The main themes shared between both worlds are sustainability, mobility of the future, technology and innovation. Furthermore, the message focuses on accountability towards the planet, with Mercedes-Benz and Avatar building their colaboration platform with the foundational message “Earth is our Pandora.”

By blending real life footage with computer generated graphics from the movie, they intended to blend the two dimensions into one, to “evoke a dreamlike sense of otherworldliness.” Fortunately, this is not just a fancy marketing statement, because the trailer’s artistic direction and imagery manage to pull off the “otherworldliness” really well.

The reason why the German car brand associated with Avatar was because the movie’s story or message is in line with its own direction for the future. According to Ola Källenius, Chief Executive Officer of Mercedes-Benz Group AG, it was a “source of inspiration” for their sustainable business strategies and practices. 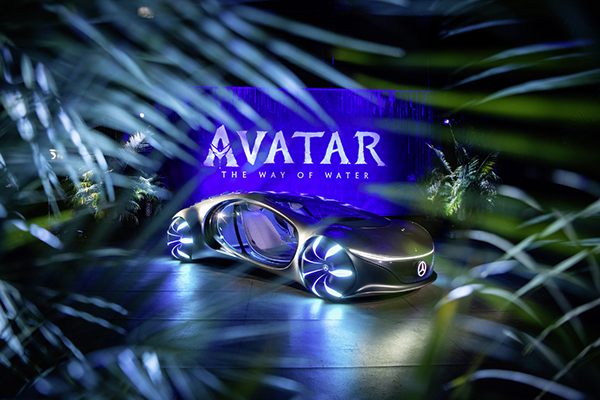 Even more than that, the VISION AVTR vehicle was inspired by the movie franchise and the design came from a collaboration between Mercedes-Benz and Lightstorm Entertainment. The latter is an American film production company founded by James Cameron.

Speaking about the writer, director, and producer of “Avatar: The Way of Water,” he also said that the collaboration happened because they share the same values of sustainability, community, and respect for our world. As a side note, the alien species Na’vi from the movies live exactly by those values, as they treat nature and every living thing with the utmost respect.

By 2030, Mercedes-Benz aims for its fleet to be fully electric where it will be possible, with models like EQA, EQB, EQC, EQE, EQE SUV, EQS, EQS SUV, and EQV flooding the streets. As for Avatar’s future, the blockbuster will hit theaters this year on December 16.