An official press release from Mercedes-AMG Petronas F1 has just come out stating that Lewis Hamilton has tested positive for COVID-19 and will not be able to compete in the upcoming Sakhir GP in Bahrain. 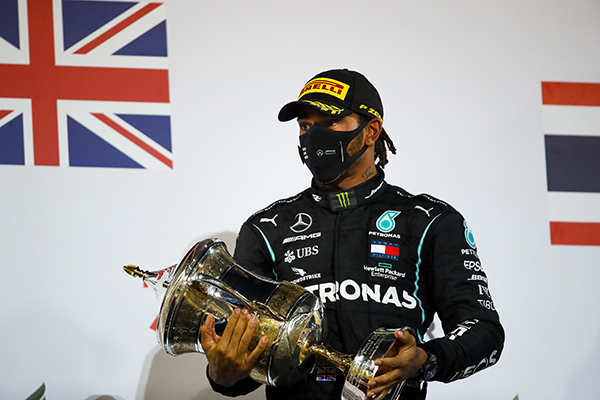 News just broke that F1 superstar Lewis Hamilton has tested positive for COVID-19, according to an official statement from his team. As drivers get regularly tested for the virus, he was already tested three times last week, with the results coming out negative.

This is already a standard procedure for F1 to have all drivers tested on race day, and seeing that Lewis’s test came out negative, he was given the green flag to compete in the last GP of November, which he managed to win, proving once again that he deserves the 2020 Championship Title.

On Monday morning, Lewis woke up with mild symptoms, and he was informed that a contact prior to his arrival in Bahrain had tested positive. This ultimately led to him getting re-tested for added safety. Unfortunately for the 35-year-old racing driver from Stevenage, UK, the test came out positive, and the result has since then been confirmed by a retest.

According to COVID-19 standard protocols and public health authority guidelines in Bahrain, Lewis is now isolating himself and is currently displaying only mild symptoms, feeling otherwise fit and well.

With just three days left until the Sakhir GP, team Mercedes-AMG Petronas is currently looking into a replacement option as it pushes on to increase its lead in the 2020 Constructor Standings, even though the team has already won the drivers’ title thanks to Lewis.

At this point, Stoffel Vandoorne looks like the most viable option, but the team has mentioned it will be making an official announcement regarding the replacement driver in due course. Even though a replacement driver is not likely to be as fast as Lewis, it would still be interesting to see what other aces the team has got up its sleeves for next year.