Dolby Atmos for cars was first announced for the Lucid Air and select Mercedes models in 2021. But with the immersive audio making it to luxury automobiles in the US last month, the company is showing off the setup here at CES 2023 with in-car demos. We got our first listening session in the backseat of a Mercedes-Maybach S 580.

We listened to Dolby Atmos inside a Mercedes at CES 2023

Dolby Atmos for cars was first announced for the Lucid Air and select Mercedes models in 2021. But with the immersive audio making it to luxury automobiles in the US last month, the company is showing off the setup here at CES 2023 with in-car demos. We got our first listening session in the backseat of a Mercedes-Maybach S 580.

First, let me explain a bit about the car. This Maybach is equipped with a Burmester 4D sound system with 30 total speakers, six of which are in the ceiling. Think of those as playing the role of upfiring drivers in your Atmos soundbar. Amplifiers deliver 1,750 watts of power and both front- and trunk-mounted subs handle the bass (the trunk sub has its own 400-watt amp too). It’s a completely insane setup installed in a $185,000 car.

The immersive sound is so impressive, it even manages to upstage its lavish setting. It’s great for pop tunes like The Weeknd, but much like an Atmos system in your home, the in-car version really shines with genres like jazz. When listening to “So What” from Miles Davis’ Kind of Blue, it felt like I was in a club. In the backseat, the drums were to my right while the horns were up by the driver and so on. The sensation was like sitting in the middle of all the musicians while they did their thing. As someone who has tested several Atmos home theater setups, I was still surprised by the results here. Of course, this is a crazy sound system in high-end luxury car, likely the best iteration of this type of Dolby automotive collab. 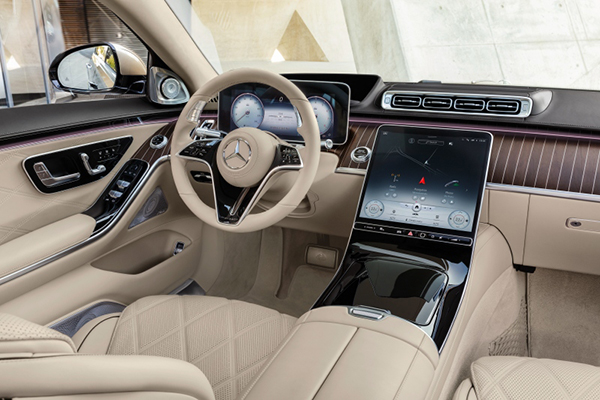 Right now, the bulk of the content is audio. Simply link your streaming service of choice, so long as it offers Dolby Atmos Music spatial audio, and you’re all set. The infotainment system in the Maybach had all of the compatible tunes clearly labeled as to which were Atmos. Dolby says there are some companies offering a/v uses, so movies and shows with the immersive audio would sync up with an in-car setup just fine. The company’s senior vice president of entertainment John Couling explained during the demo that he anticipated people would watch movies mapped in Dolby Atmos while their EV charged, for example.

Dolby says Atmos was designed to be scalable from the start, so just like it has for soundbars, the audio platform can be configured for more run-of-the-mill speaker setups in more affordable cars. We’re talking four-channel, six-speaker arrangements. It wasn’t so long ago that Atmos was reserved for only premium soundbars and now it’s available on things like the Sonos Beam via virtualization. So even though a family car or minivan may not have the ceiling-mounted overhead speakers a Mercedes does, immersive audio won’t be out of the question. Much like it’s interesting to see how more budget-friendly speakers handle Atmos, I’m looking forward to hearing what a virtualized version sounds like in a Honda Civic.

Dolby Atmos is currently available on the Lucid Air and Mercedes-Maybach S-Class, as well as the Mercedes-Benz S-Class, EQE, EQE SUV, EQS and EQS SUV. Volvo has already announced that Atmos will be available on the Bowers & Wilkins sound system in the EX90 SUV. The EV will be the first Volvo to have Dolby’s immersive audio inside. The Polestar 3 also packs an Atmos-equipped Bowers & Wilkins setup and it’s due to arrive later this year. The Plus pack specifically includes a 25-speaker system for this task. Lotus has also announced a collaboration with Dolby, bringing Atmos to the KEF setup inside the Eletre EV that’s due to debut in 2024.