I can’t help but giggle to myself cruising around in the 2022 Mercedes-Maybach S 580. It is so absurdly good at its intended purpose. Just like a Porsche 911 is to performance, the latest Maybach is to all-out luxury. 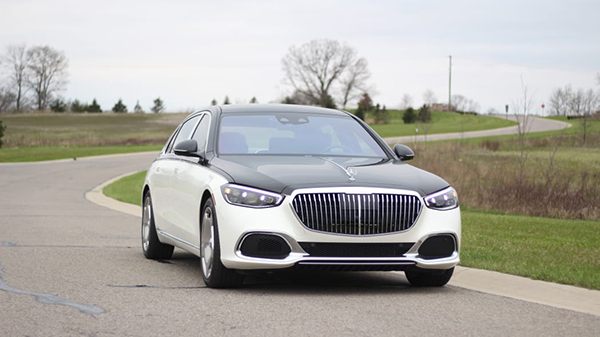 Much of the Maybach’s goodness is thanks to the excellence of the new S-Class. Technological innovations like rear-wheel steering, E-Active Body Control and the latest MBUX software systems, all found in the new S-Class, establish a very lofty floor for the Maybach version of the car to build upon. And yes, when you pay the Maybach S 580’s exorbitant $185,950 base price, you get a whole lot more than just the standard S-Class experience.

Appearances are half the battle with mega-luxury yachts like this car. The Rolls-Royces and Bentleys of the world are formidable on the road, and this Mercedes-Maybach puts up a good fight. It all starts with the 7-inch-longer wheelbase, most of which you’ll see represented in the massive “comfort rear doors.” And we do mean “comfort” — they electronically swing open or shut via a switch on the ceiling or via a touch to the pop-out door handles. A massive radiator-style grille replaces the comparatively subdued grille in the standard S-Class. The C-pillar is noticeably more upright in the Maybach, and it features a light-up Maybach logo that reminds everybody about how rich you are, even at night.

And lastly, there’s the utterly breathtaking two-tone paint — pictured in Obsidian Black/Manufaktur Diamond White here — that costs $12,750 extra, but is genuinely worth the coin. Robots first spray the whole body in the lower half’s color, then the dividing line is hand-painted before both it and the lower part of the car is masked off for the top color to be hand-applied by Mercedes’ expert painters. There are lots of steps that were just left out, but know that the process can take up to a week in the custom paint shop before the body is returned to the regular production process. 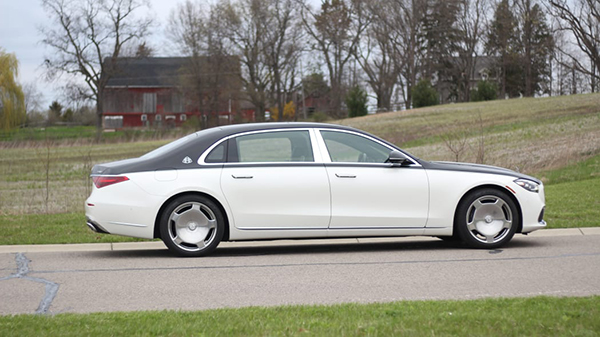 The end result of all these changes is a sedan that is both deeply different in character but also recognizable as the S-Class it is based on. It’s also just as imposing and rich-looking as a Bentley Flying Spur, so don’t worry about being out-classed in the country club parking lot.

Deciding which seat to occupy — the driver’s seat, or the lounge-like rear seat — on the way to said country club might be the most difficult decision any Maybach S 580 owner will have to make on any given day. The driver in us sure does find the driver’s seat rather enticing. Being the S 580, it’s powered by the same 4.0-liter twin-turbo V8 found under the hood of the regular S-Class — the V12 still exists, if you must. The Maybach is lugging around an extra 472 pounds of weight versus the regular S 580, but the enormous sedan still hustles from 0-60 mph in 4.7 seconds. There’s a quasi-launch mode that brings on headrest-slapping shifts, which is just silly. Thanks to the standard E-Active Body Control suspension, it even handles shockingly well in “Sport” mode when pushed. However, speed and maximum grip are not what the Maybach is about.

Where the Mercedes-Maybach excels is when you put it into its unique “Maybach” drive mode, and take it easy. Here, the accelerator tuning is gentler; the 9-speed transmission is put into a “low-shift” configuration, and the car starts in second gear. Plus, the suspension is relaxed into a “maximum” comfort mode to make the ride as smooth as possible in all seats. The corresponding driving experience is as cosseting and as low-impact to those in the car as it gets. It’s almost impossible to disturb the peace, because every input leads to an output that won’t so much as disrupt your sip of coffee. “Smooth” is not a forceful enough word to describe what Mercedes has engineered here. Even the brakes are more progressive than a standard S-Class, resulting in the most graceful slowdowns and stops. Yet somehow, they don’t feel mushy or lack feel — it’s really quite special.

The integrated starter-generator system does an imperceptible job in the background, shutting the engine down whenever it’s unnecessary, and turning it back on in an instant. You wouldn’t ever really know when the engine is shutting down or starting back up again if there weren’t messages in the dash either. We’ve truly reached the point of seamless advanced start/stop technology.

Mercedes’ vast suite of driver assistance systems are playing at their best here to reduce driver stress and fatigue. What makes the Maybach even more special than most, though, is how it reacts when road conditions transition to those that are less kind to lane-tracing or lane-keeping systems. Abrupt lane endings, missing lane markings, weird construction zone transitions and other situations can make driver assistance systems do weird (sometimes bad) things. No matter what hectic situation the Maybach was piloted through, it would not be triggered to make any erratic or non-human moves. Instead of having to quickly switch the various lane- and road-keeping systems off in poor road conditions as must be done in most cars, the Maybach could simply be trusted to maintain its composure.

Of course, the one place you can be in the Maybach with zero chance of annoyance or disturbance is the rear seat, assuming you spec the $6,000 Executive Rear Seat Package Plus package. Compared to the previous Maybach, the new one has incrementally more legroom, headroom and elbow room — not as though that was a problem before, but this one is better by a few tenths of an inch in every direction. 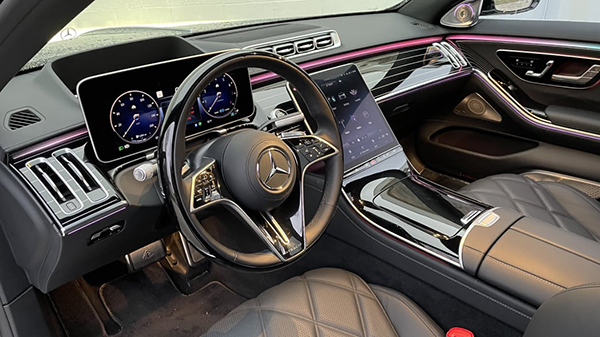 The rear seat can be put into its fully laid-back position — a maximum of 43.5 degrees — with just a tap of a button that moves the front passenger seat forward, lays you all the way back and puts two footrests down (one for short and one for taller folks). Both seats feature numerous massage programs selectable via either the tablet that rests in the center console or the screen on the back of the front headrest. New for this generation is a calf massage function, so you can dutifully make fun of previous generation Maybach owners who won’t be getting a calf massage in their car. The seat itself, the armrests and even the headrest are heated to keep you in a warm, sleepy embrace. Plus, the cupholders are both heated and cooled to keep your beverage at the desired temperature. Even getting in is a cinch, as Maybach added new seat belt minders to put the belt in a more convenient place to grab.

Business is easily done in the rear thanks to leather-covered trays that are stowed in the center console and far more power outlets than anybody would ever need, but having fun is just as easy. A $1,100 fridge option can be selected, and if you’re so inclined, the silver-plated Maybach-branded champagne flutes are $3,200 more. Turn up the Burmester 4D surround sound system, and the bass will literally vibrate you. Resonators built into the backrest of each seat send waves through your whole body, making you feel like you’re standing by the speakers at a heavy metal concert. It’s an in-car audio experience unlike anything I’ve experienced before, but the vibrating seats definitely won’t be for everyone — thankfully, you can turn them off or adjust their intensity as you desire.

Burmester aside, the new Maybach is promised as being even quieter than the previous one. Tire, wind or road noise you’d experience in other vehicles is brought down to a whisper, leaving you in a cocoon of silence that’d be blissful for hours on end. The EQS might have an advantage in engine noise and the resulting vibrations of internal combustion, but there’s a certain serenity and sense of calm from this silky V8, too. 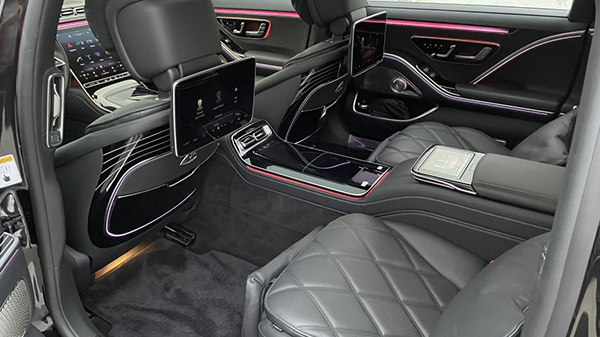 Mercedes may already be talking about its next-gen infotainment system — but today, nothing in this class of cars is as luxurious or tech-forward as this version of MBUX. It’s fitting that Mercedes didn’t apply the EQS’ Hyperscreen version of MBUX to the Maybach, too. Sprawling surfaces of lined wood and intricate metal switches seem more appropriate for this car, and anyways, the backseat rider won’t even benefit from having a massive screen in the front seat, so what’s the point in that?

Everything about driving and riding in the Maybach is easy, and that’s pivotal to luxury. Even this sedan’s size doesn’t cause issues thanks to the 10-degrees of opposite lock the rear wheels are capable of. Crank the wheel all the way, and the turning circle is comparable to a C-Class — it’s shocking.

You could even call the Maybach a bargain versus other massive sedans in this segment. The Bentley Flying Spur V8 starts at a little over $200,000, and the Rolls-Royce Ghost is just pure excess at $343,000. My test car came out to $227,900 after options, and while that’s a stratospheric price to pay for any vehicle, it provides an experience unmatched by anything else at said price point. The Mercedes-Maybach experiment that started back in 2014 has truly never been better than it is right now.