Having spent ample time with both Mercedes’s petrol Benz GLS 580 and AMG’s wild 63 S, we were keen to get our hands on the turbodiesel 400d version of the S Class of SUVs. Diesel cars have never been a big deal in the US, so this car was never a starter there. That said, I for one reckon it would do very well in the ’States. So keen to get to know it better, we lined a GLS 400d up for a long planned road trip week to the African Drakensburg.

But there’s another side to this story that very much gets this died in the wool petrol head’s goat. The fact that this woke green car industry is hell-bent on exorcising diesel propulsion from all roads around the world. In what promises to become among the most misguided motoring mishaps in history.

Delectable GLS 400d Defies the Diesel Plight
So, before we delve into this delectable Mercedes-Benz GLS 400d, let’s talk about the plight of the diesel engine. Never a starter in the US, derv was just beginning to gain traction in the ‘States as it had over in Europe. Until Dieselgate struck. Remember that? When among Europe’s top carmakers were caught dodging car emissions? In racing, they reckon that you’re only a cheat if you are caught cheating. Well guess what!

Volkswagen, among others, ultimately coughed up $25 billion in penalties for its carbon sins. Now in its spades of mea culpa self-pity, that company has vowed to deliver an all-electric future. And many of its auto industry rivals are following Wolfsburg’s single-minded electric example. All while diesel is quite simply being shown the door. Which is tragic. Especially considering brilliant cars like this.

How good diesels can be, became patently evident within a few minutes of taking the wheel of this fine machine. We were thoroughly impressed. Agile yet comfortable, the diesel version of S-Class of SUVs is a splendid car to drive. It doesn’t feel like it’s a diesel engine. Its torque is beneficial to every aspect of its envelope. To make it so easy to drive. The über torquey GLS 400d is great on the open road — so much so that you’d swear that you’re pedaling a petrol 580.

Mercedes is a Premium Sport Ute Leader
Getting back to the GLS, Mercedes-Benz has been a premium Sport Utility leader since it invented the genre with the M-Class back in ‘97. SUVs are now key pillar in the Mercedes range. Then Benz introduced the original full-size seven-seater GL in 2006. That car was facelifted and re-badged GLS in 2015 as it placed significant emphasis on luxury. The 2015 update further outed its luxury character and this one has now gone another step.

The new Mercedes-Benz GLS 400d’s striking Mercedes grille and distinctive headlamp design leads into an imposing is slab-sided profile. Its 0.32 coefficient of drag is also far more slippery than its 0.35 cd predecessor. It gets busier further back — powerful haunches extend around to caress the taillights. Its sheer size sets GLS apart from the rest of the G range.

Step aboard and its cabin defines the synthesis of modern, luxurious aesthetics. Merc promises the best of all worlds GLS delivers hallmark SUV practicality and digital high-tech. Having had more than ample time to sample its V8 biturbo petrol siblings, we were quietly anticipating this 325 HP 516 lb.-ft GLS 400 d 4Matic turbodiesel straight six. As much for the abovementioned quandary as we wanted to sample the acme of derv SUVs. 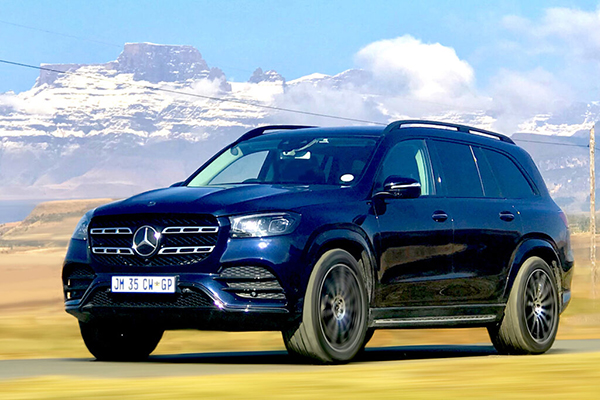 Diesel Electric GLS 400d is Partially Hybrid
Partially hybrid, GLS 400d also has an additional 22 hp and 185 lb.-ft of 48-volt electric torque on tap. That courtesy of its bonus integrated EQ Boost starter-generator. GLS 400d fees its considerable diesel electric punch to Mercedes’ 4Matic all-wheel drive via a 9G-Tronic automatic transmission. Its ratios were selected to ‘deliver a fine balance between comfort and capability across all GLS’s broad range of abilities.’

They say that the big diesel accelerates to 60 mph in 6.7 seconds, tops 148 mph and sips 31 mpg. Our tests actually proved it a bit quicker than that and our trip suggested those fuel claims accurate, too.

We duly packed our bags and headed out of the city. The stop-start glut allowed us to better acquaint ourselves with our pedigreed steed. The traffic eased out of the city to allow me to revel in GLS 400d’s electrified turbodiesel straight six. Its EQ Boost hybrid assistance carries on regardless — you need to select the eco dash to keep tabs.

GLS 400d Can Actually Drive on its Own
I enjoyed running GLS on its route-based speed adaptive Distronic following device. It adapts to the traffic around you and maintains your preferred distance to the vehicle ahead. It also reads the road and steers. And gets annoyed when you don’t steer yourself! The system recognizes and responds to tailbacks before you even know they’re there. GLS’s significant poise however dominates the highway enough that trucks move over as you approach from behind!

GLS 400d also showed off its 9G-Tronic 9-speed autobox on the open road. Its broad spread of ratios reduce engine speed to benefit both ride comfort and efficiency. And backed up by an excellent 0.32 cd aerodynamics for its segment, it’s beyond quiet and serene on the road. That’s also thanks to standard Airmatic air suspension and Adaptive Damping. It adapts to road conditions to ensure ultimate ride comfort. GLS also gets latest Mercedes driving assistance, while Trailer Assist will ease towing.

We were soon running at 35 mpg while averaging 80 mph. Not bad for a behemoth like this, hey? And turbodiesels are bad? Running on cruise control much of the time, it has more than ample grunt when you need it. I was loving the trip. The silent GLS delivers a sublime ride, whatever the conditions. That said, it must be noted that driving this car in a strong shear breeze, the lea side windows became noisy in the wind. A notable vacuum on that slab flank, perhaps? 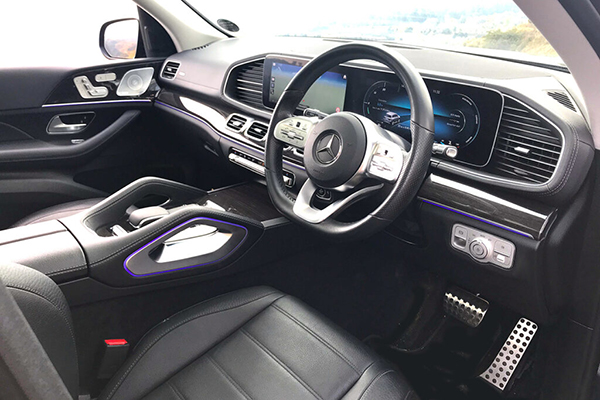 Sublimely Interactive MBUX Infotainment
I have become a big fan of Mercedes’ sublimely interactive MBUX Infotainment, on which GLS of course majors. Mrs. My Mercedes is good, but there is better. And gesture control is a hoot to use. But it’s too sensitive when for us Italians. The best of MBUX is however the GLS’ premium level Star Wars dual dash infotainment. And how that all works via the multifunction steering controls.

Those intuitive little touch pads and buttons allow you to seamlessly paddle through the many functions on both the dash and infotainment screens. To monitor your progress, fuel use, where you are going, make hands free calls, play music, the radio and much more. Although I’d be happier with a little more direct control to the likes of station or playlists, rather than delving into layers of windows to find those basic functions.

GLS also has wireless smartphone charging and more than ample USB ports. Pity they’re only those more modern ports and a compromise considering that most folk still use more the bigger plug old USB accessories. Only Merc and Mac leave conventional USBs out.

It snowed that night, to afford us the perfect opportunity to load up and head out chasing snowmen early next morning. We rode 6-up in a 2 by 2 by 2 drill on a lengthy jaunt out and nobody complained all day long. Partially because this latest GLS packs 2.4-inches extra wheelbase into its additional dimensions. They say that extra length benefits second row passenger space.

The third row also comfortably accommodates six foot-four passengers. Not that we needed it — the girls sat hindmost. My passengers were more impressed by the power folding pews and all the gadgets at hand.

GLS is Supremely Versatile
GLS is supremely versatile — all five second and third row seats power flat into the floor at the touch of a button. That increases boot space to a delivery van-like 85 cubic feet. Not that the remaining boot is small with all the seats up. Oddly only a short extendable load bay cover bridges the smaller gap to leave the extended load bay option exposed.

We traversed a few challenging tracks and never once felt we’d fall off the end of the earth. GLS 400d seemed to flatten even the most extreme driving angles and made a mockery of obstacles as it took 4×4 to another level. Then the next morning I was sent out to find cream in a blizzard. I took that opportunity to explore this fine chassis a little on the long road, which outed even more of great vehicle’s strengths. As much as it dwarfs 4×4 challenges off the beaten track, the S Class of SUVs defies its size and mass across a quiet Berg col.

Alas, after a few days of exploring the snowy Berg, we grudgingly turned tail and headed back to ‘civilization’. Once up and over the escarpment, the fuel range once again rose encouragingly to leave me with 100 miles of range to use up back in town. That after a 550-mile round trip including some spirited driving and ample exploring and adventure. Tell me diesel does not have a place in society? This woke lot really is fast asleep! 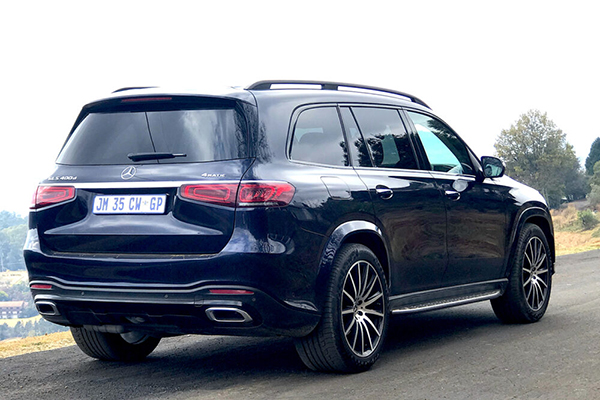 Fast, Powerful and Splendidly Responsive
So, after a splendid week in its esteemed company, we handed this wonderful Mercedes-Benz GLS 400 back. It may be a diesel. But it’s no tractor. Fast, powerful, and splendidly responsive there’s no clatter, rather a sonorous V6 tone and an eerily silent cabin. It’s also stacked with all the right stuff, never mind a gargantuan 600 mile-mile tank range.

Engines like this masterpiece 325 HP 516 lb.-ft turbodiesel straight 6 have made huge strides over the years. It’s powerful, silent, torquey, and wonderful to drive. But Dieselgate has all but killed the diesel and future development remains under threat in the mad rush to electrify.

Yet this 400d is the pick of the Mercedes GLS bunch. It’s a shame that you can’t get it in the ’States. And an even bigger shame that the woke car industry is hell bent on making turbodiesel extinct. Happily, however, there are also car companies like Mercedes-Benz. Far from ignoring the electric need, Merc is on the forefront of battery car development. But it also recognizes that electric cars are still just that. An alternative.

And Mercedes is also committed to also long continue to develop petrols and diesels like this. Thank God for that!