At this point, just about anything could have the term “crossover” applied to it. It’s inherently vague, and we’ve long since moved beyond the strict definition of an “SUV with a unibody platform.” So if one wants to consider the 2021 Mercedes-AMG GLA 35 a crossover, sure, why not? 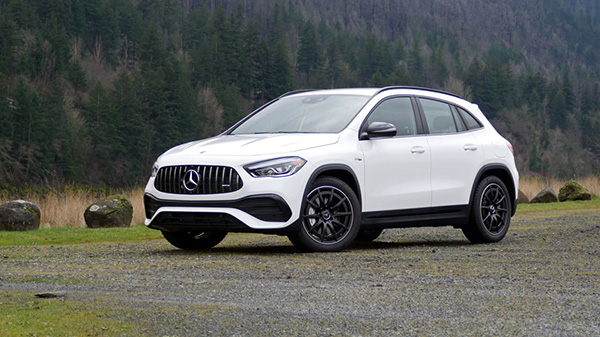 That said, in concept and execution, the GLA 35 is really just an extra-large hot hatch. A VW Golf R for those with greater utility needs. Or luxury desires. Our test car didn’t even have tinted rear windows, which is as much of a crossover staple as anything. And through that XL hot hatch lens, the AMG GLA 35 is far more compelling.

It is, of course, a member of the second-generation Mercedes-Benz GLA-Class, and by extension the entire Mercedes compact front-drive family that also includes the GLB-Class, A-Class and CLA-Class. Although their base engines differ and some go without the full habanero AMG 45, all are available as an AMG 35 that shares a common 2.0-liter turbocharged inline-four good for 302 horsepower and 295 pound-feet of torque. They all have AMG variants of 4Matic all-wheel drive and an eight-speed dual-clutch automated manual. Of course, with its greater size and weight, the GLA variant is slower than its sedan siblings, but it still rips from zero to 60 mph in a cool 5.1 seconds. That’s quicker than a Honda Civic Type R. 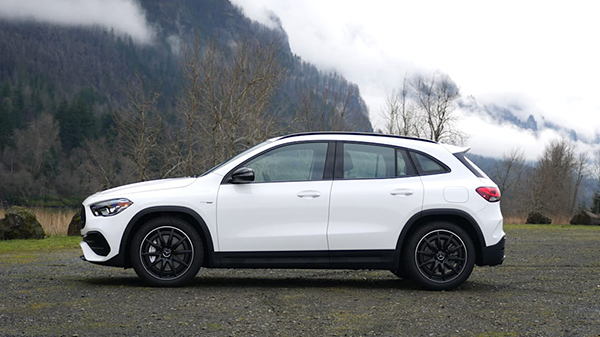 As with most 2.0-liter turbos, this one delivers immediate low-end torque and not much character. Thankfully, the GLA 35’s other powertrain elements make up for that. The throttle and transmission are alive and eager to respond to your inputs, constantly engaging the driver the second you get under way. Even Comfort mode is agreeably responsive. As in other AMGs, selecting Sport+ brings aggressive downshifts under braking and a willingness to stay in a lower, to-hell-with-fuel-economy gear. At the same time, you can change gears with the chunky metal paddle shifters that move with a hefty, mechanical feel and pair perfectly with the dual-clutch’s quick reflexes.

And then there’s the noise. Standard is the AMG exhaust system with a gas flap that modulates sound based on engine speed, load and whether you’ve engaged Sport+. Basically, this means that it makes cool sounds when accelerating hard. Not obnoxious nor farty, there’s a sharp burble to it that makes you want to accelerate more just to hear it. In sound, sensation and straight-line speed, then, the GLA 35 satisfies the hot hatch standards. 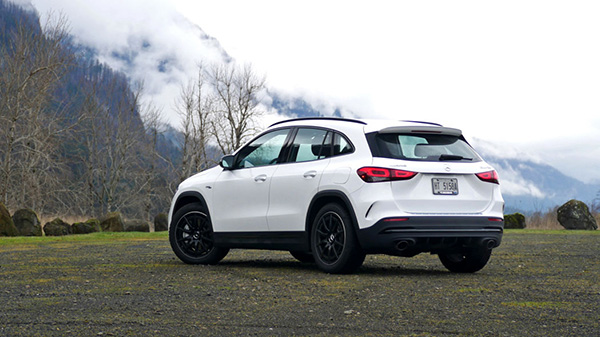 What about in corners? The AMG 35 is stiffer than the grocery-getter GLA courtesy an aluminum plate under the engine bay that increases torsional rigidity along with two additional, diagonal braces. The MacPherson strut front and four-link rear suspension feature AMG componentry and tuning throughout, most notably a front steering knuckle that features a motorsports-derived radially bolted brake caliper.

AMG Ride Control adaptive dampers are fitted as standard. Besides constantly adjusting damping forces based on conditions, there are settings for each of the Comfort, Sport and Sport+ drive modes. We were happy to find that the ride in Comfort is actually as advertised, at least by firm-ish hot hatch standards. It was perfectly tolerable on a lengthy highway trip and on the broken pavement of Portland, Ore. This stands in contrast to the CLA 35 that tiresomely jostled and jiggled on perfect Phoenix pavement. 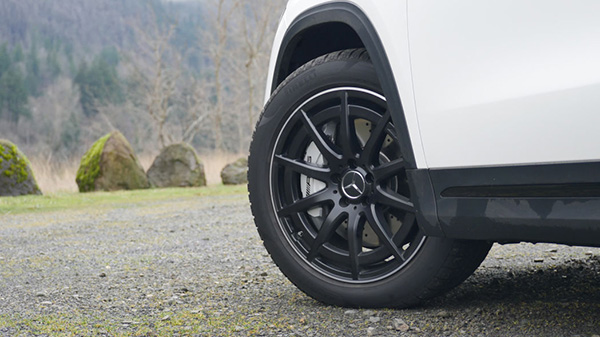 We also like the ability to easily mix and match drive setting elements through the optional, configurable AMG Drive Unit Steering Wheel buttons pictured above. Specifically, it lets you swap the suspension to Comfort and keep everything else in Sport, either perpetually or as a spur-of-the-moment, crap-pavement-ahead option. Usually, you have to dig into the infotainment system to do that. And even if you forego that $400 option, there’s still a button on the center console that’ll just change the suspension (you will indeed need to dig into MBUX to mix and match other settings).

Of course, leaving the suspension in Sport or Sport+ is still the way to go to flatten this XL hot hatch through corners. The 4Matic all-wheel-drive system contributes to the cause by splitting power distribution by as much as 50:50 between the axles (it’s a front-biased system), negating any torque steer and enhancing grip. The AMG-specific steering provides an agreeable amount of heft in the Sport modes: firm on center with the right amount of extra effort required without feeling unnatural or contrived to achieve a “sport” feel. And that applies regardless of speed or scenario thanks to the speed-sensitive, variable ratio system applied subtly to maintain a consistent steering feel rather than one that overtly tightens and loosens as the speedometer rises and falls. 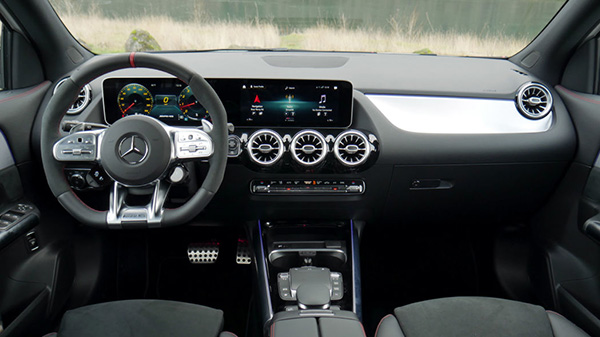 Winter tires and damp roads kept our mountain road exuberance to a minimum, but our drive was still enough to italicize that this is indeed an extra-large hot hatch. You definitely feel the extra girth compared to an actual hot hatch. It’s roughly 6 inches taller and longer than the dearly departed Golf R. It’s 2 inches wider, too, and 280 pounds heavier. It never feels tossable, and the high-mounted driver seat prevents that “shrinking around you” feeling.

So that’s bad, right? Well, sure, if all you care about is performance. While you lose agility, you gain utility. There’s a surprising amount of headroom in the back, and the high-mounted seat grants sufficient legroom for average adults in all four corners. A tall driver will need to scooch their seat up, especially with a middle-placed, rear-facing child seat, but that’s the norm for both compact hatchbacks and subcompact crossovers. 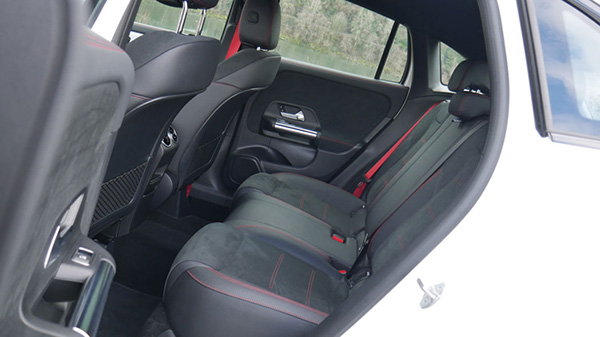 Cargo space is listed at 19 cubic-feet, but as we’ve discovered with the GLB and GLC, Mercedes’ measurements undersell their vehicles’ actual capabilities. Every bag from our standard luggage test assortment fit, which is substantially better than an Audi Q3 and the majority of subcompact crossovers. It was virtually the same amount as what the Subaru Crosstrek could manage. Of course, the GLB can shockingly hold as much as a Subaru Outback.

We haven’t driven that boxy brother, but considering it’s considerably bigger in every dimension but width, it seems like a fair bet it won’t have that same hot-hatch feel. Because even if you notice its extra size, the GLA 35 still feels like an 8/10ths approximation or better the vast majority of the time. It makes you want to drive, and usually in a rather hoonish kind of way. If life (or your wife) is telling you need something bigger than a compact hatchback, regardless of its hotness, the AMG GLA 35 could be the perfect solution. Rest assured, a Thule stroller and Chicco infant car seat both fit inside. 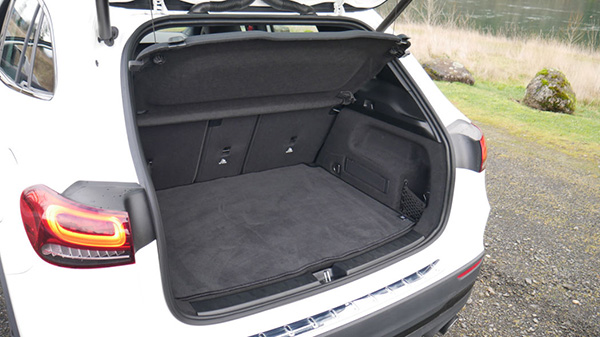 Not surprisingly, though, this extra-large hot hatch brings with it an extra-large price. Starting at $48,600 and going up to $53,630 in our reasonably optioned test car, that’s $8,000 more to start than the final Golf R, and about $10,000 more than a Honda Civic Type R. Even the John Cooper Works Mini Countryman starts at about $6,000 less. But this is a Mercedes, and the GLA boasts more than just extra inches. As in every A-Class-derived Mercedes, the cabin is a feast for your eyes, with a unique, compelling design enhanced by multiple ambient lighting choices. Materials quality is exceptional compared to all of the above and acceptable for its price point. The switchgear looks terrific and operates with pleasing fluidity, most notably the rotary air vents and those AMG steering wheel switches. It comes standard with the MBUX interface, which may be rather convoluted and frustrating to use, but nevertheless is feature-packed and will impress your friends with its crisp, pretty graphics. It’s also important to note that the higher price pays for better-executed features, such as the myriad driver assistance systems.

So it’s obviously not as clear cut as “extra-large hot hatch.” It’s an extra-fancy one, too. And paying $53,630 for either of those things probably isn’t the most sensible purchasing decision. Still, the 2021 Mercedes-AMG GLA 35 is stupid fun. And cars that are stupid fun are rarely sensible. That it manages to be as practical as it is while still being well under the price of the AMG GLC 43 above it at least tempers the stupidity. That endorsement probably won’t end up on a GLA billboard. The word “crossover” probably will, but really it shouldn’t. It’s better than that.