The new GLA 250 e is plug-in hybrid motoring at its best, and for many prospective buyers this could be the GLA to go for. Impressive all-electric running combines with surprisingly sporty yet economical hybrid drive when the petrol engine is brought into play. There are more practical alternatives, however, and exactly what UK buyers will get for the money in regards to equipment has yet to be determined. 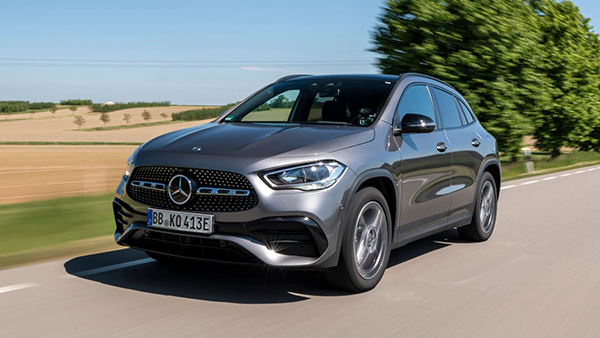 Small cars are playing an increasingly bigger role at Mercedes, especially when you consider the way in which the brand is introducing new fully-electric and plug-in hybrid models to its line-up. 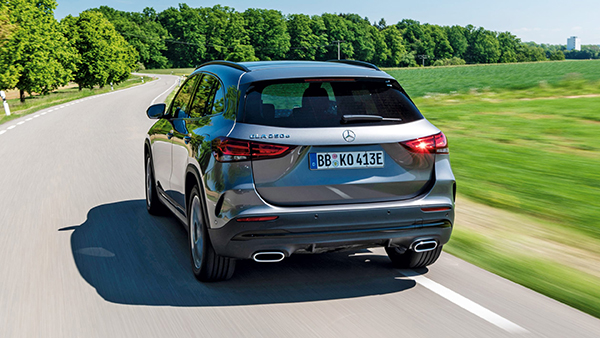 The next two electric Mercedes will both be compact SUVs, in the form of the upcoming EQA and EQB crossovers. On top of that, a trio of compact plug-in hybrids are arriving in 2020 – and this GLA could well hold plenty of mainstream appeal. 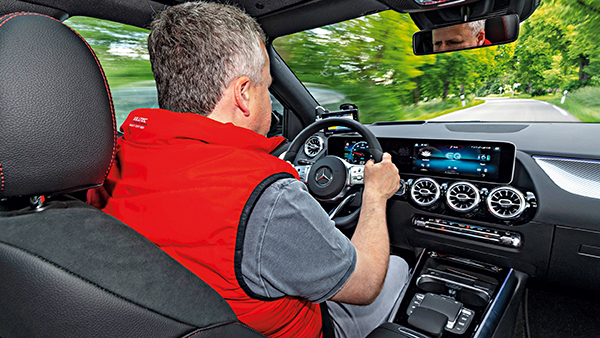 Joining electrified versions of the latest CLA and CLA Shooting Brake in British Mercedes showrooms is the new GLA 250 e, which shapes up as a rival for plug-in hybrid versions of the latest BMW X1 and X2 and the Volvo XC40. As Merc’s entry-level SUV, it’s bound to be popular – and plug-in power could actually make the 250 e the best version of the newcomer. Here’s why. 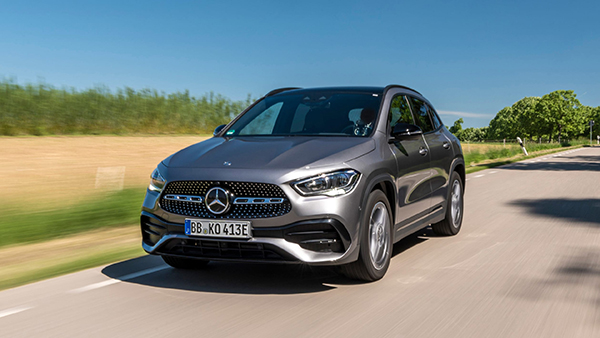 The powertrain is adopted from the new plug-in hybrid versions of the A-Class hatch and B-Class MPV, and based on our previous experience, it shapes up as one of the most convincing electrified powertrains in just about any small family car on sale right now. The engine is a 1.3-litre turbocharged four-cylinder, but it’s the battery and electric motor setup that really makes this hybrid SUV tick. 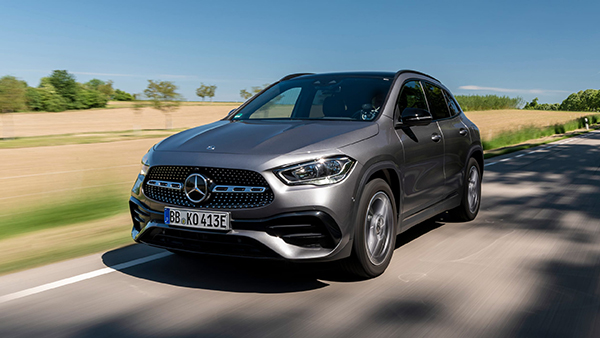 Total system power stands at 215bhp and 450Nm, while the electric power is stored in a 15.6kWh battery. The GLA 250 e uses a single electric motor and the front wheels are driven via an eight-speed dual clutch automatic gearbox. On a 7.4kW wallbox, a full recharge will take around an hour and 45 minutes. On higher voltage systems, the GLA 250 e can recharge at 24kW, a 20 to 80 per cent top up is possible in 25 minutes. 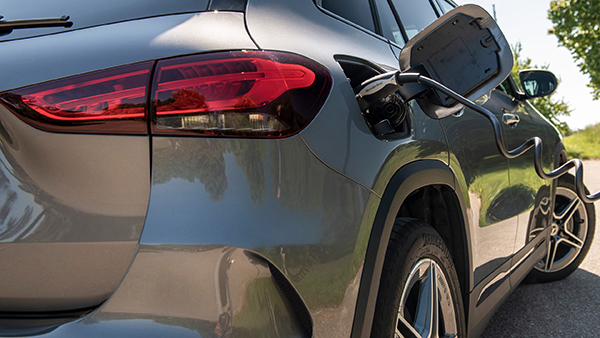 The figures are what will lure buyers in – particularly promises of fuel economy up to 176.5mpg, CO2 emissions as low as 38g/km and an all-electric range of up to 38 miles on a fully battery. However, get behind the wheel of the GLA 250 e, and you’ll quickly discover it’s got some fun and function to go with its impressive numbers.

Start it up, and things are completely silent – the engine is started by the electric motor and not a separate 12-volt system, so you’ll roll away smoothly and silently before the engine kicks in. With a 99 per cent charge, our car tells us we have 34 miles of electric power in the battery. This will fluctuate on use and outside temperature, but the GLA 250 e is proof that the batteries used in plug-in hybrid cars are becoming more and more energy efficient, and what Mercedes produces in lab tests is getting closer than ever to what you’ll actually get out on the road. 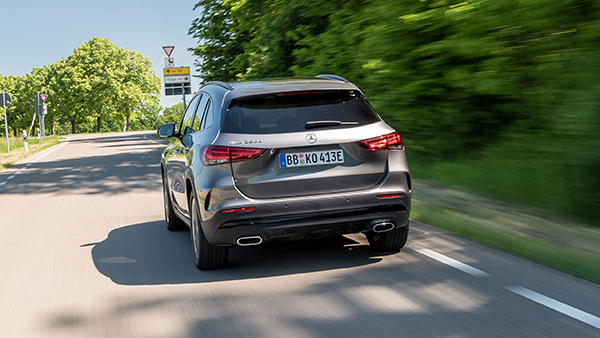 The electric motor is rated at 101bhp and capable of taking the GLA up to 86mph on electric power only. Be in no doubt as to this plug-in hybrid’s all-electric credentials then – this is a PHEV you could easily do short motorway commutes on, without ever needing to fire up the combustion engine. 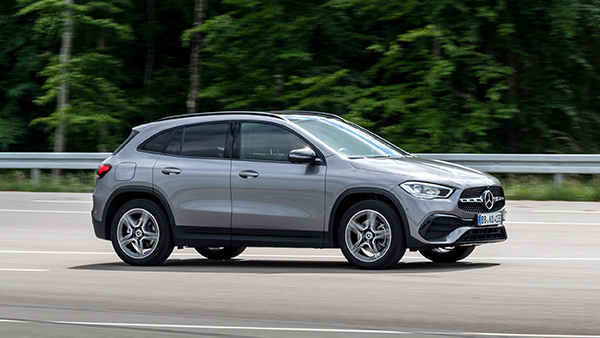 Bringing the 1.3-litre engine into the mix introduces more power and torque, and with it the GLA 250 e becomes quite spirited in the way it goes about its business; 0-62mph is reeled off in just 7.1 seconds, while top speed is 137mph. However, the GLA is not an agile SUV. It’s focus is on comfort, and even though our car is still a prototype, the way battery and petrol power integrate with each other is seamless. The petrol engine is fairly refined too, only becoming coarse on kickdown.

Everywhere else, the GLA 250 e seems unstressed, and the various drive modes really can shuffle character between unleashing all 450Nm torque in Sport, to the impressive all-electric party trick. The brakes are probably the weakest aspect of the package from a mechanical sense. The regeneration needs to be smoother, as coming to a halt can be a grinding and lumpy affair. 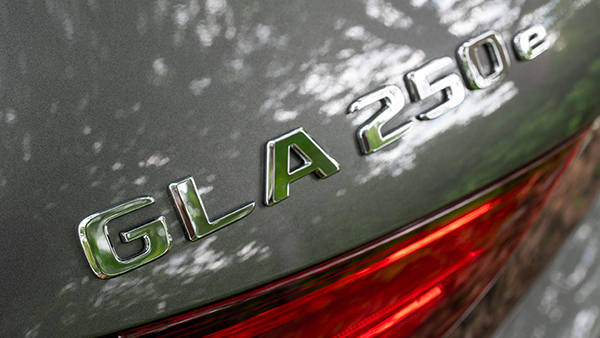 Mercedes has fitted the plug-in hybrid model with a smaller fuel tank, while the exhaust exits centrally, under the car’s floor. It means that despite this being a small plug-in hybrid car with a large battery, boot space and passenger foot and legroom isn’t too badly affected. However, the GLA isn’t the largest or most practical option in this class. You’ll get 385 litres of space – down 50 litres – with all seats in place and a totally flat boot floor, but many rivals can do more.

Final UK specifications have not yet been announced, but the GLA 250 e should follow the established trim structure for petrol and diesel versions of the car. That means that AMG-Line cars like our model should receive a smattering of sporty visual cues on top of standard equipment leveraged from the base Sport model, though given the 250 e’s lofty position in the engine line-up, additional equipment, such as the upgraded MBUX infotainment system with two 10.25-inch displays could be made standard kit to sweeten the deal.