The Mercedes-Benz GLA and GLB classes share a common platform, powertrain options and multiple interior pieces. They’re awfully similar, but you don’t have to look at their specs to guess correctly that the boxier GLB provides more utility than the hatchback-like GLA. And if you do look at the specs, you’ll see that the GLB is nearly 9 inches longer with 4 extra inches of wheelbase. Those are considerable differences even if their rear legroom dimensions are curiously identical (perhaps it’s a measurement issue caused by the GLB’s sliding back seat?).

Speaking of measurement issues, I once again must point out that Mercedes’ cargo numbers don’t really equate to most others in the industry. Much like the GLC, both the GLB and GLA are much more voluminous than their respective 22.0 and 15.4 cubic-foot capacities would indicate. For some context, the GLB’s number should make it roughly equivalent to a Subaru Crosstrek, but as we’ve previously shown, it can actually hold as much as a Subaru Outback. The GLA is similarly being shortchanged by what seems to be 7 cubic-feet by my estimation given how much stuff it can actually hold.

And how much stuff can the GLA hold? And how does it compare to the GLB? Let’s take a look! 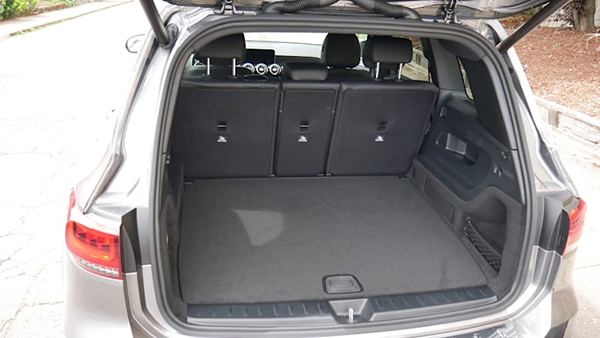 Both GLA (top) and GLB (bottom) have a cargo floor that drops down for extra space or stays in a higher position to ensure a flat cargo floor when the back seat is lowered. All tests going forward are with the floor in the lower position.

The GLB is available with a traditional pull-out cargo cover, but my test vehicle did not include it. The GLA did have the rigid, hatchback-style cover so this is how much it could hold.

Basically, the four biggest bags can fit under the cargo cover. Not bad, actually.

OK, now let’s remove that cargo cover and get back to the cargo comparison. 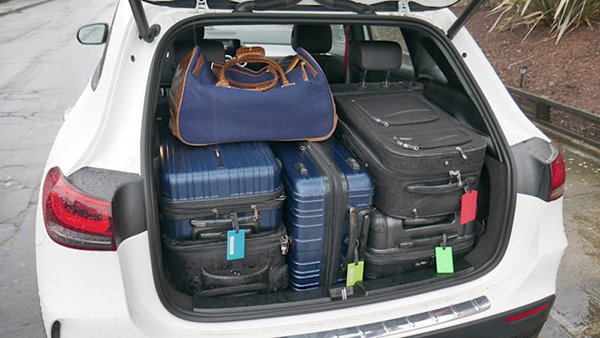 So the GLA can actually fit all the bags with rear visibility still maintained and the fancy bag prevented from flying forward by the seatback. Whether you consider the GLA a compact hatchback or a subcompact SUV, this is very good. It’s basically the same as the Subaru Crosstrek can manage. It blows away the Audi Q3.

And yet, check out how much space is remaining when the same number of items are placed in the GLB. And note, this is with the GLB’s back seat slid back to its rearmost position. It gets bigger than this.

Now, I could slide the seats fully forward and render them mostly useless to people while stuffing in an absurd amount of stuff, but what’s the point of that? Instead, I simply slid the 40/20 portions forward by a small amount shown below. The /40 portion stayed where it had been.

The result of this small scooch forward is the ability to carry all the stuff shown below, including a 38-quart cooler, a box containing a double river innertube, a duffle bag and a small briefcase-sized bag.

Here is how this same amount of items fits in the GLB and the GLA. 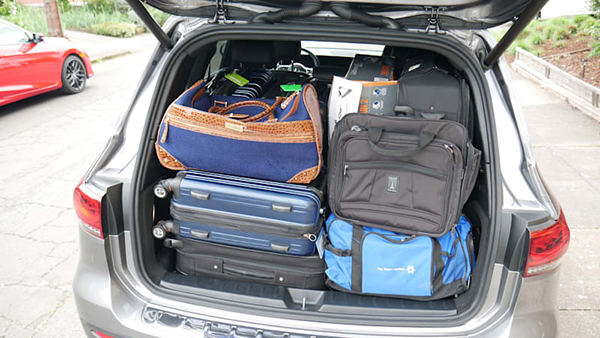 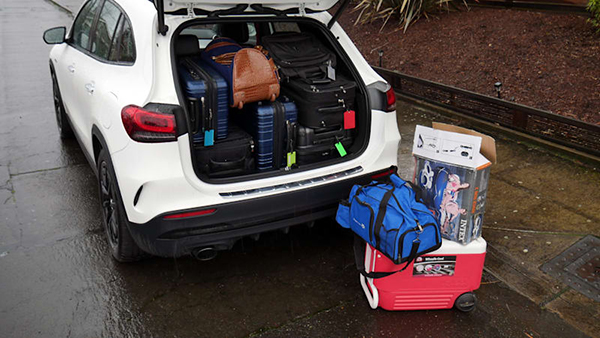 So yes, I did cheat a bit by moving the seat forward, which is not possible in the GLA. Nevertheless, I think this is pretty illustrative of how much more space is in the Mercedes GLB versus the GLA. It also speaks to its greater versatility. For $1,820, you get so much more utility in the GLB and comparable feature content, even if you presumably lose some agility (especially with the AMG 35 models). For me, choosing between the two would be easy.