If you must have a performance crossover, there’s plenty to like about the GLA 35. The performance on offer is both impressive and easy to achieve, plus it remains a compact and practical family car. However, on optional 21-inch wheels the road noise and refinement is unacceptable. And they’re just one item on an extras list that can see the price of the GLA get downright silly, too. 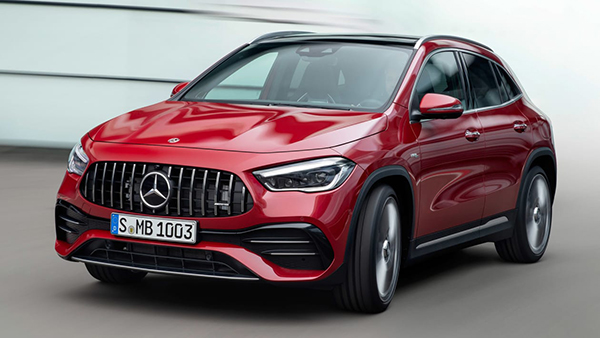 This is the new Mercedes-AMG GLA 35. It’s a hot SUV which joins a fledgling market segment of rapid crossovers which, until now, was hogged by the VW group’s trio of the Volkswagen T-Roc R, Audi SQ2 and Cupra Ateca. 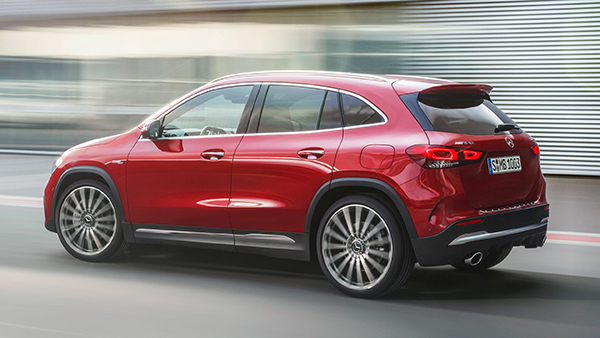 With our practical hats on, subjecting Mercedes’s posh compact crossover to the AMG treatment might actually make a bit of sense. Here’s a car which, like the mechanically similar A-Class-based A 35, has a hefty 302bhp at its disposal, but comes with a higher ground clearance, helping to all but eliminate the risk of wince-inducing undercarriage scrapes on our bumpy, undulating B-roads or speed bumps. That all sounds good in theory, but does it make sense in the real world? 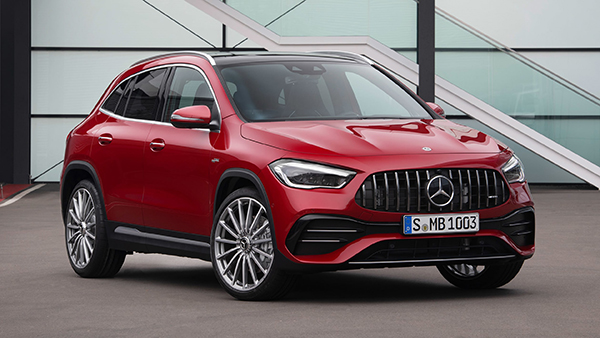 Well the typical AMG styling add-ons have managed to add some appeal to the standard GLA’s smooth shape. Up front, the signature ‘Panamericana’ grille found on all the latest AMG Mercs is present and correct, and it sits above a wide wing-shaped air dam which lends the GLA a menacing look. Twin tailpipes, a spoiler and subtle badging give the back end a distinct appearance. Wheels measure from 19-inches to an almost cartoonish-looking set of 21-inch items. 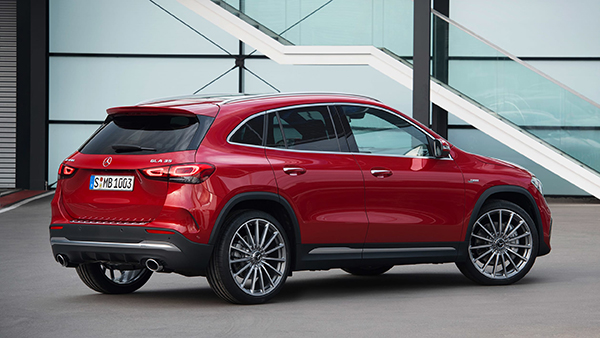 The SUV shape means that, while the GLA shares much of its architecture with the A35, it’s more practical. Not only is there the obvious gain in height (200mm more to be precise) but the GLA’s wheelbase has grown 30mm; changes which together both boost rear legroom and offer up a generous 495-litre boot volume. That number also stacks up well against the T-Roc and SQ2 – the latter is 140 litres down on the Mercedes – and just edges the marginally taller Ateca. 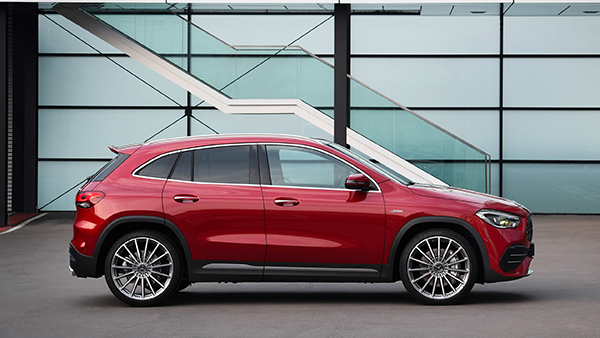 Inside, the GLA is the nicest of the lot. All of the important bits – the digital displays, the neat switchgear and trio of stylish centre bullet vents – are lifted almost wholesale from the A-Class, which means both in terms of the tech available and its overall sense of occasion it’s at the top of the class. Though look to either side of the driver’s eye, and the need to stretch the A-Class design across a taller dashboard has resulted in rather clumsy-looking slabs of carbon-effect trim. The driver sits roughly 140mm higher than in the A-Class, which helps to give a suitably SUV-esque driving position, but the figure-hugging seats keep hold of both your hips and a sporty character. 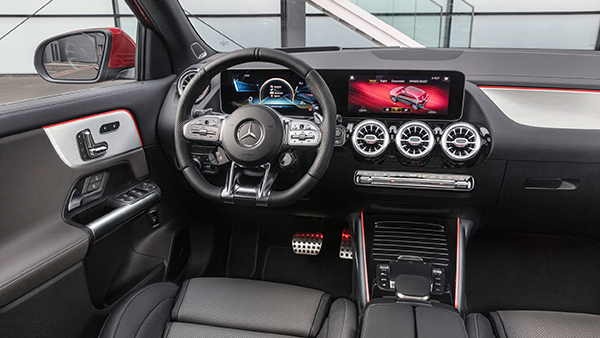 On the road, the extra height hasn’t significantly altered the GLA’s driver appeal relative to its other AMG 35-badged stablemates. It’s still blessed with quick yet precise steering, strong brakes and a stable, roll-resistant chassis that generates huge – and hugely reassuring – levels of grip. Calling it fun would be a bit of a stretch, though. 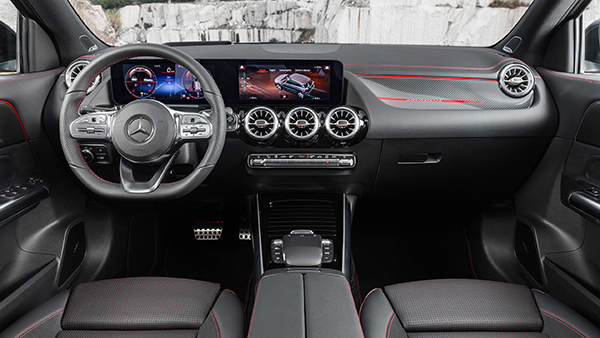 The engine itself is equally effective. The 2.0-litre turbocharged unit pulls strongly throughout the rev range, and the GLA certainly feels good for its claimed 5.1 second 0-62mph time. At low revs it sounds rather rough, a quality that is thankfully masked by a fruity exhaust note when on the move. The eight-speed gearbox is great for the most part, but sometimes feels reluctant to kick down, only to then downshift a ratio too many. You can avoid this though, either by taking manual control with the wheel-mounted paddles or by choosing a sportier driving mode. 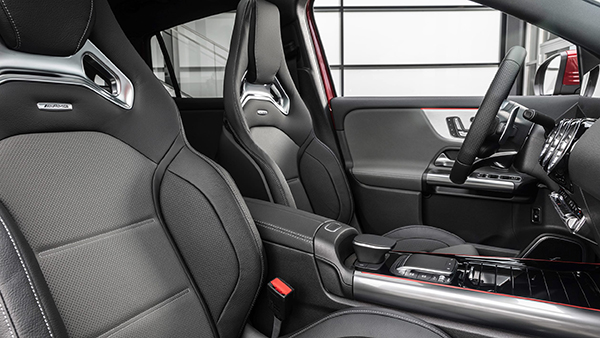 Doing this tweaks the feel of not just the gearbox and throttle response but, on our test car, the firmness of the adaptive dampers, too. Turn the dial to Sport+ and the ride becomes fidgety, bouncy and borderline irritating. Fortunately, Mercedes allows the suspension to be controlled independently of the drivetrain modes through another steering wheel button; Sport is noticeably smoother than Sport+, but we’d just pick ‘Normal’ and leave it at that. 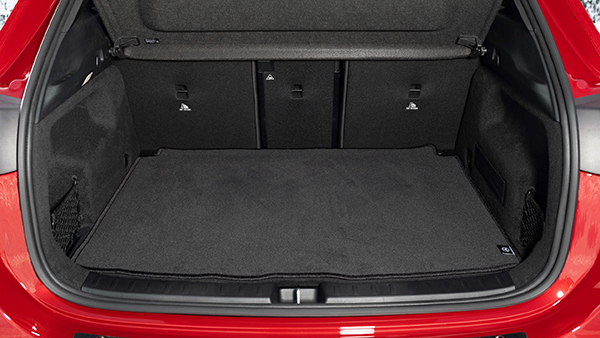 But decent ride or not, the overall refinement is ruined by those huge wheels. The 21-inch items, equipped in top spec ‘Premium Plus’ trim, are wrapped in 255mm-wide, 35-section rubber, and the road noise is borderline unacceptable at anything over 30mph. While we’d reserve full judgement until we’ve tried the standard 19-inch alternatives, the constant grumble spoils what would otherwise be a pretty relaxing drive by hot crossover standards. 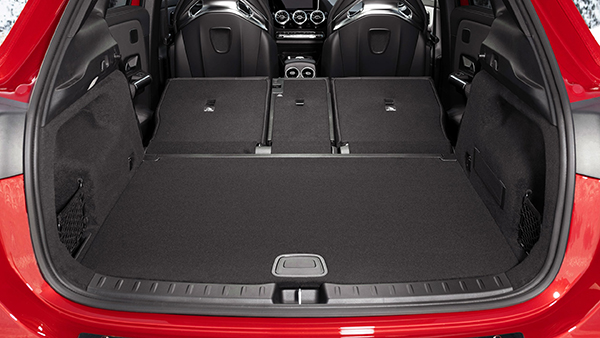 UK buyers will be offered the GLA 35 in three different trim levels: AMG 35, Premium and Premium Plus. For the extra £2,500 beyond the standard car, the Premium trim adds extras including a larger digital driver’s display and infotainment screen, augmented reality graphics for the navigation system, ambient lighting, and keyless entry. 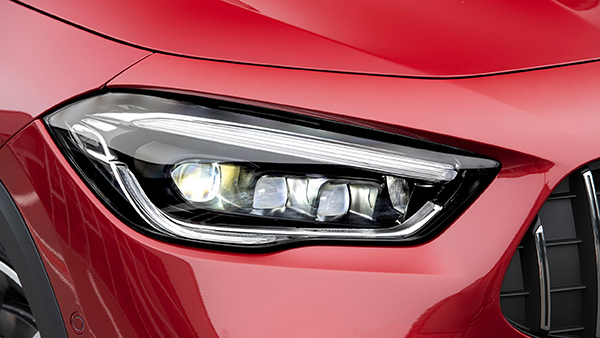 The Premium Plus costs a further £3,500 on top of the Premium, and brings in, among other things, a Burmester sound system, memory seats, multibeam LED headlights and a panoramic sunroof. 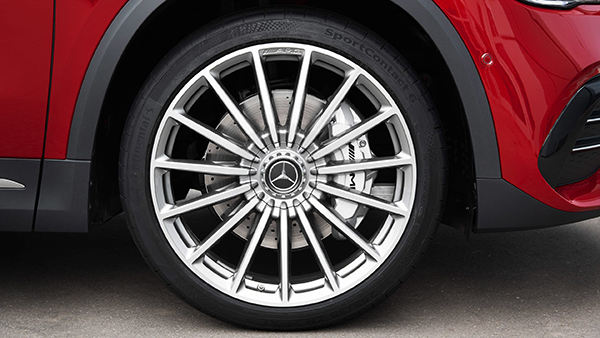 But that brings us onto the price. UK buyers will have to pay from £43,565 – roughly £7,000 more than an A-Class with the same engine and kit. It’s also £4,825 more pricey than the VW T-Roc R – though admittedly the GLA is both more practical and much plusher inside. And it’s best to steer clear of the options too – our German spec test car, including options, came to €76,540 – a smidge under £70,000. Which ever way you spin it, is a ludicrous amount of money for a compact SUV.