It may have become a fashion statement these past few years, ever since the new generation broke cover at least, but the Mercedes G-Wagen is still a proper off-roader beneath the skin. Unfortunately, not many of them get anything other than smooth tarmac under their tires, and the same goes for the pictured copy. However, this one is a bit more special, as it holds the cure to bullet allergy, and it has a stretched wheelbase too. 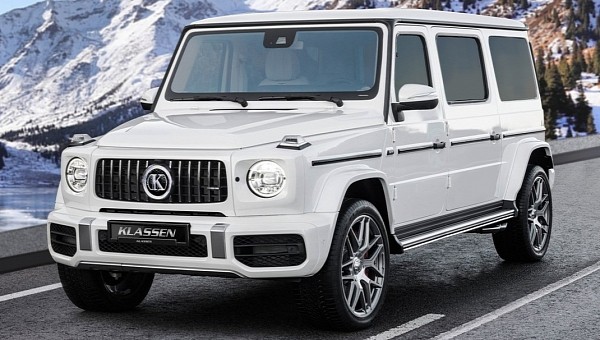 Besides the longer rear doors and much bigger rear fenders, together with the rear-quarter windows, Klassen’s Mercedes-AMG G 63 boasts VR8 ballistic protection. This means that it can withstand 7.62 rounds fired by an AK-47. Thicker windows, with multi-layer bulletproof glass, reinforced passenger compartment, including the roof and floor, protection for the chassis and fuel tank, fire extinguishing system, intercom, run-flat tires, strobe lights, new suspension with reinforced springs and shock absorbers on both angles, and different door hinges are all part of the ballistic makeover.

The potentially life-saving equipment joins the already generous list of features offered straight from the factory. These comprise stuff such as the heated front and rear windshields, smartphone integration, ambient lighting, infotainment system, digital instrument cluster, heated steering wheel, heated front seats, Dinamica microfiber roof liner, and Burmester surround sound system. The LED headlights, AMG ride control, active lane assist, park assist, traffic sign recognition, 360-degree camera system, and a whole bunch of other stuff are on board too. As for the icing on the cake, as long as you’re a real petrolhead that is, it’s the V8 engine. 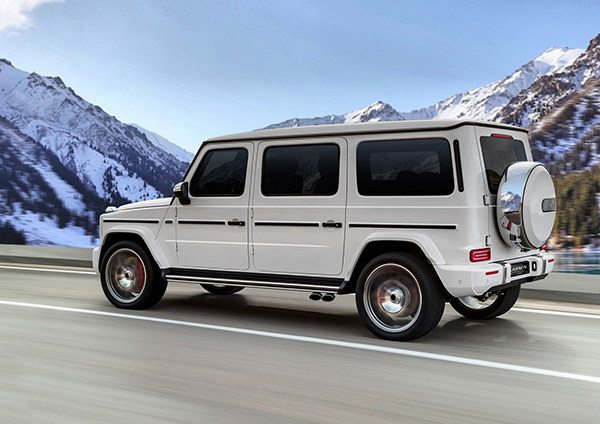 Popping the hood open will reveal the 4.0-liter twin-turbocharged unit. Working in concert with a dual-clutch nine-speed automatic transmission and the 4Matic all-wheel drive system developed by the Affalterbach brand, the V8 yanks out an impressive 577 hp (585 ps/430 kW) and 627 lb-ft (850 Nm) of torque. Sure, one might argue that it is nowhere near as powerful as some of the world’s quickest high-riders, but while most of them are nothing more than simple crossovers, including the Lamborghini Urus and Ferrari Purosangue, the Mercedes-AMG G 63 is a true SUV, one that can take on some of the most arduous terrains out there, albeit with chunkier rubber on its feet, and come out the other way victorious. At 137 mph (220 kph), the top speed isn’t anything to write home about, until you remember that it weighs as much as a small shed and that it has similar aerodynamics too. From 0 to 60 mph (0-97 kph), you are looking at 4.5 seconds.

While the stock G-Wagen tips the scales at almost two and a half tons (~5,500 pounds), Klassen’s Mercedes-AMG G 63 is much heavier. We do not know the actual weight of it, but the armoring and stretching have probably added a few hundred kilograms. As a result, one might naturally assume that they have given it a bit more power in order to cope with all that weight, right? Actually, that would be a no, because it is still listed as having the stock output and torque. Thus, it won’t go anywhere near the 4.5 seconds required by the standard one to hit 60 mph (97 kph) from a standstill, and chances are that the top speed is also lower. But then again, no one would ever buy a G-Wagen limo with ballistic protection to unleash it at the local racetrack, would they?

Now, if you somehow need to spice up your collection with an armored and stretched G-Wagen, and become the talk of the town, then you are in luck, because Klassen is looking to part ways with this one. Advertised on their official website here, this very special vehicle is said to have only the delivery miles under its belt, so it likely comes with that new car smell, if you’re into such stuff. Details surrounding the delivery will have to be discussed directly with the vendor. The same goes for the price too, as it is available upon request, the ad reveals. Still, considering that a non-stretched armored G 63 is valued at almost $500,000, you can bet that this one costs way more than that. If we had to guess, we’d say that it is likely not a $1-million affair, but it is not exactly a bargain either, unless you have more money in the bank than you could ever physically count.