The story of Heuliez started more than a century ago, in 1920, when Frenchman Adolphe Heuliez decided to concentrate all his efforts on building upscale horse-drawn carriages. As you can imagine, these vehicles were slowly but surely going extinct – especially when it came to those tailored for wealthy buyers – so, it only took the founder a few years to realize that his company had to make the switch to automobiles.

Thus, in 1925, Heuliez would complete its first coachbuilt car based on the mid-range Peugeot Type 177 B. This project attracted interest from both affluent individuals who wanted a bespoke body for their automobiles, as well as local manufacturers who wanted to develop what we now call limited-edition models for niche markets.

In the decades that followed, the company grew from a small business into one of the most respected coachbuilders in France and it even ventured into the world of mass transportation in the 1980s with the creation of a subsidiary called Heuliez Bus, which is still around today.

Unfortunately, the same cannot be said about the coachbuilding arm of the firm, which ceased operations in the fall of 2013. 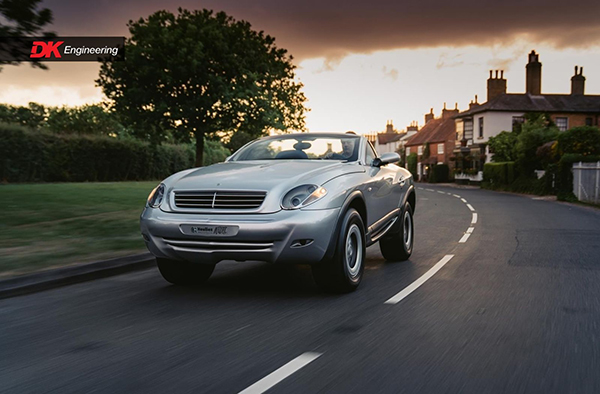 From homologation specials to a fascinating concept
These days, Heuliez is remembered by many enthusiasts for its long-lasting partnership with French giants Citroen but also for its collaborations with Renault and Peugeot, which gave birth to a couple of legendary, rally-bred homologation specials. The first was the mid-engined Renault 5 Turbo introduced in 1980, while the second was the equally impressive Peugeot 205 Turbo 16 unveiled four years later.

In addition to building the bodies for these two iconic hot hatches, Heuliez is also remembered by G-Wagen fanatics for its fascinating Intruder concept, an audacious mix between the off-roading legend and the first-generation Mercedes-Benz SLK roadster.

Today, the idea of a convertible SUV is not that audacious thanks to models like the Range Rover Evoque Convertible or Volkswagen’s T-Roc Cabriolet, but twenty-seven years ago, when it debuted at the Paris Motor Show, the Intruder was nothing short of mind-blowing. It retained the two-seat interior and state-of-the-art retractable hardtop of the SLK, while underneath, it was a legit G-Wagen capable of talking any terrain. It was simply out of this world and those who were in attendance at its unveiling couldn’t really believe that someone had the guts to create such a vehicle.

An extremely complex build
On paper, designing a lifted, off-road-capable SLK was not that hard. However, fitting the roadster’s body, onto a G-Wagen frame was quite the opposite. Both the styling and engineering team at Heuliez spent months figuring out how to make it work, with the biggest issue being that the G featured a traditional body-on-frame construction, while the SLK was built around a unibody structure.

This fundamental difference between the two vehicles required extensive modifications to both the donor G320’s frame and the SLK body. In fact, most of the roadster’s body panels had to be rebuilt from scratch. That meant that the bumpers, fenders, or doors had to be reproportioned in order to fit snuggly atop the G chassis. However, with a bespoke touch from the coachbuilder’s designers, the finished structure ended up having absolutely no resemblance to the boxy, and rather outdated G-Wagen body. Moreover, the SLK’s sensibly curvier look was accentuated from virtually every angle, so in the end, the Intruder didn’t bear much resemblance to the Mercedes roadster either.

Arguably its most fascinating feature was the fully-electric retractable hardtop borrowed from the SLK, which was a long way from the mainstream back in 1996. While the metal and glass panels were redesigned by the French coachbuilder, the system itself was the same piece of innovative German engineering as the one used on the mass-produced SLK. It allowed the outrageous Intruder to switch from roadster to convertible form in around 30 seconds. 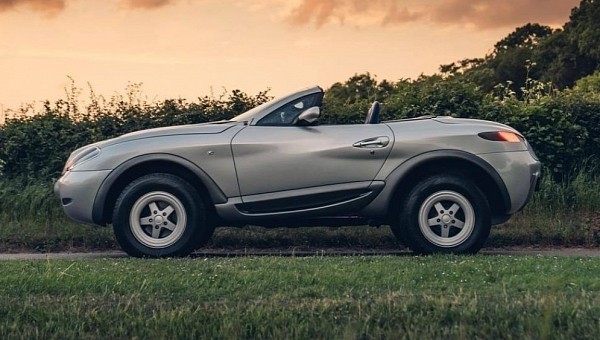 Like the exterior, the concept’s cabin was also completely reworked. The dashboard was flattened for increased visibility, which required the gauges to be relocated to the middle. Upholstered in blue leather, the steering wheel, and sporty bucket seats shared no commonalities with either the G or the SLK and an interesting feature was the addition of two small seats in the rear. However, the restricted legroom made these virtually unusable, even for small children, let alone a pair of fully-grown adults.

Underneath the modified body, things were much less custom. Power came from the 208-hp (211-ps), 3.2- liter, six-cylinder that was found on the 1996 G320. It was mated to the stock four-speed automatic, a combo that sent 221 lb-ft (300 Nm) to all four wheels. Speaking of which, the Intruder was just as capable as a conventional G-Wagen in off-road situations thanks to the solid all-wheel drive system complete with the original differential locks.

It’s still around and it can be yours
Now, if you have never heard about the Heuliez Intruder before reading this article, you’re not alone. Even though the unusual vehicle received positive reviews after its unveiling, and the French coachbuilder even considered a limited-production run, the costs involved would have made it way too expensive, so it remained a one-off. Another coachbuilder from Italy called OPAC took Heuliez’s recipe and produced an SLK-bodied G-Wagen coupe in a handful of examples.

Just like it did in 1996, the Intruder doesn’t fail to blow people’s minds today. To some, it might look a bit too odd, but to others, it’s a visionary piece of coachbuilding excellence. One such person who prefers to remain anonymous purchased the concept from Heuliez and invested around $300.000 to have it fully restored.

The fascinating one-off was listed for sale in Brittan by DK Engineering for no less than $217,517 (£174,995). It is still available on the company’s website, so if you’re looking for a unique all-terrain-conquering roadster, this is your chance to own one.