That’s right – Brabus has got its hands on the G-Wagon and turned it into an absolutely outrageous pick-up truck! So let’s take a look at what you get over the standard G-Wagon. Clearly, the main change is the load bed around the back, coupled with a whole load of carbon fibre covered oh-so-much of the exterior. There are also a number of huge vents and air intakes… Even if most of them are fake. Either way, it looks pretty damn mean! Oh, and the ground clearance has been increased from 21cm to 49cm!!

The exterior design is just as wild as the performance, for better or worse. Carbon fiber has been used liberally, including the entire truck bed and muscular fenders. However, there are also a few fake vents made from the same material, with a huge fake air-grabber hood being the worst offender. Another gimmick which could cause split opinions is mounting heat-resistant LEDs in the exhaust tips, which light up when the car is on the move. 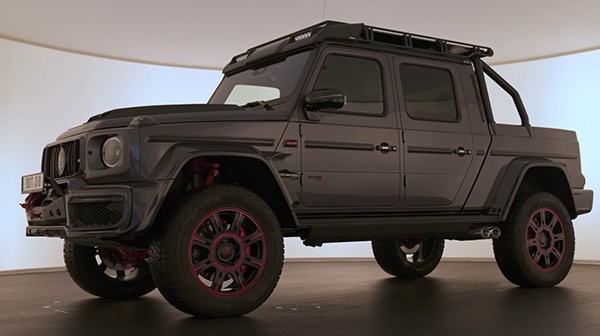 The interior has also been overhauled, completely retrimmed, and reupholstered. What used to be chrome is now painted in an aggressive red color, emphasizing the theme of power. Weirdly enough, the owner could choose to have two captain’s chairs in the back of the vehicle, which is usually reserved for cars meant to be driven by a chauffeur, not capable off-roaders.

Speaking of going off-roading, the XLP has it covered. Starting with the ground clearance, it boasts 490 mm (19.3 inches) thanks to the portal axles. This is more than double that of a normal G-Class and makes the 22-inch alloy wheels look hilariously small. Improved dampers and control arms, along with heavy-duty underbody protection further enhance what were already impressive capabilities. Obviously, everything that has been done to the vehicle makes it slightly worse to drive, both on the highway and in the city.

Sadly, the Brabus Adventure XLP will be as rare as it is extreme, with only 10 units to ever be produced.