We learned recently that Mercedes-Benz will be skipping the 2022 model year for many of its V8 cars, including the AMG-powered, 577-horsepower G 63 SUV. Underneath the polish of this $176,000 Mercedes lurks the rugged, go-anywhere bones of a G-wagen. Equipped with the Trail Package, this is the most capable AMG-powered G-Class money can buy, so we decided to see if its fancy suit holds it back when things get dirty. Byron took the G 63 out to Holly Oaks ORV Park in southeast Michigan in hopes of finding some low-speed obstacles to play around with. What he found instead was something much more suited to the G 63’s character.

It’s hard to go wrong with a big V8, four driven wheels and a trick suspension. Throw in a three-pointed star and all of the pomp and circumstance that goes along with it, plus a storied nameplate like Geländewagen, and things get really interesting, really fast. Really, really fast.

No matter how you look at it, the 2021 Mercedes-AMG G 63 is not your Großvater’s G-Wagen. With 577 horsepower and 627 pound-feet of torque at the ready, this big 4×4 makes the Jeep Wrangler Rubicon 392 look like overachieving farm equipment. That power goes to the ground via a permanent all-wheel-drive system with a 40/60 front/rear torque split and lockable center, front and rear differentials. When the going gets really tough, the two-speed transfer case allows for low-range crawling.

That’s a spectacular résumé for any 4×4 with off-road aspirations, but in true top-tier AMG fashion, it’s the pure, unfiltered essence of overkill that really seals the deal. While its official 0-60 time of 4.4 seconds makes it only a tenth quicker than the Wrangler 392, its top speed of 137 mph (in this configuration; 149 mph with the Driver’s Package) shames the blue-collar Jeep’s tire-limited 99 mph figure.

A-ha, the tires. Our test model was even equipped with the AMG Trail Package, which adds Pirelli Scorpion ATR all-terrain tires (albeit on 20-inch wheels) and some upgraded underbody protection, but nothing so burly or rock-ready as what you’ll find on a Rubicon. To make matters worse, Trail Package or no, the AMG’s side-exit exhaust pipes exit below the running boards just forward of each rear wheel, hanging perilously low from a part of the vehicle that is especially prone to being bitten by passing rocks. 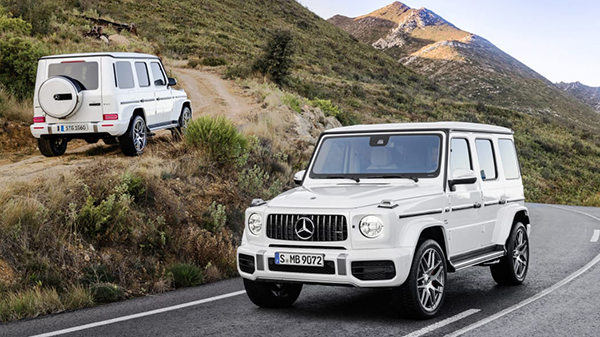 But no matter. If Mercedes-Benz says it can go off-road, damn it, who are we to argue? With that in mind, we booked an afternoon of playtime at Holly Oaks ORV Park, whipped out the old dune flag and set about seeing just what a $176,000 play toy for playboys can really do in the dirt.

Mercedes-Benz recommended airing down in 5 PSI increments until we hit our desired balance of spring rate and pliability for off-pavement excursions, and we ended up stopping after pulling 10 pounds from each corner for the sake of protecting those Trail-Package-only five-spoke wheels. These Pirellis may nominally be all-terrain tires, but their sidewalls just aren’t nearly tall enough for serious off-road work. In reality, they’re engineered to be capable of doing a little bit of everything, meaning they’re not particularly exceptional in either on- or off-road environments; just good enough to be serviceable.

The next step was enabling “Trail” mode, which is a convoluted process. First, you have to enable one of the G’s various off-road features. In our case, we hit the toggle for the center differential lock. That was enough to make “Trail” appear alongside the usual suspects in the Mercedes’ Dynamic Select drive mode menu. We then dialed the traction control over to “Sand” and went on our way. Slowly, at first.

We learned from our refamiliarization lap around the park that recent weather has reshaped much of the landscape, but its core staples remain exactly where they were before Michigan’s deluges. We started with some of the hillclimbs and narrow, wooded trails, doing what we normally do in 4x4s, but without somebody to spot (and with those exhaust pipes dangling both from the car and in the back of our minds), we steered clear of the crunchier, more challenging low-speed obstacles. 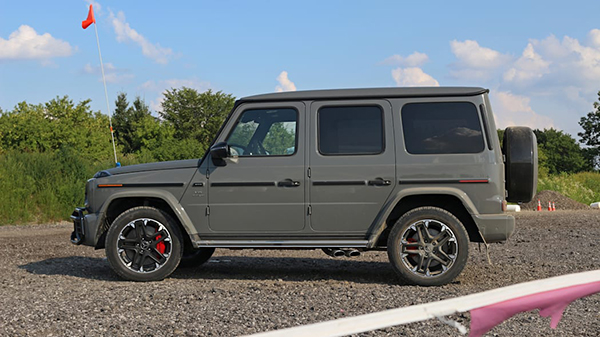 Loose surfaces and steep hills proved no match for the G, and we never once rubbed its belly or those precariously positioned pipes on anything of consequence. We became concerned that we weren’t pushing the G hard enough to learn anything, meaning we were going to have to take some risks lest the outing prove uninformative. But then we remembered one key detail: This isn’t just a G-Wagen; it’s an AMG. Slow and steady? Technical rock crawling? Pfft. And that brought us to Holly Glen.

The Glen is near the entrance to the park, and put simply, it’s a dirt race track. It’s not a fancy one. There’s no start/finish line labeled, nor any accommodation for spectators or officials or anything of that nature. Rather, it’s simply a one-way loop wide enough for a half-dozen dirt bikes or a couple of 4x4s, long enough to be “high-speed” relative to the technical obstacles and hill-climbs elsewhere in the park, but neither straight nor flat enough to allow you to build up a ton of speed that you may not be able to bleed off before the next jump or blind corner. There are a couple of posted rules (no ATVs, no going against the flow of traffic, that sort of thing) but nothing that said “take your rich-boy toy and turn around.” In other words, perfect.

With everything in the G 63’s dynamic select set to “Stupid,” we bombed around the course while onlookers in Wranglers held up phones, likely hoping to capture a stupid rich person doing a stupid rich thing in their stupid-expensive SUV. Sorry to disappoint, blue Wrangler guy. Catching air and just generally having an absolute blast, the G 63 got to do exactly what it’s good at: converting gasoline to noise in the most exuberant, entertaining fashion possible.

And when we say it’s good, man, is it. The G 63 may look barebones for its price tag, but underneath its simplistic, boxy shape and clackity-clack door latches lies a tech-forward powertrain that can translate a few millimeters of steering input and pedal travel into a spectacle of sound and flying sand. “Trail” mode dials most of the nannies back considerably, and the remaining safeties lie dormant in the G’s electronic periphery until you do something particularly ham-fisted. 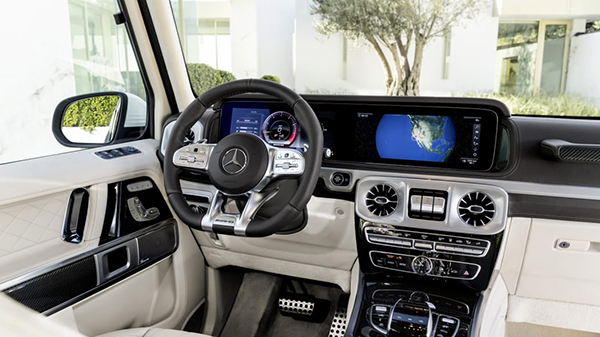 What that might be exactly, we can’t say. Despite taking off-camber hills at near-full lock with all four corners sending massive rooster tails 20 feet in the air, getting all four wheels off the ground, and churning so deep into loose sand that we felt it brush along the big G’s belly, we were never scolded by any of its numerous and heavily intertwined systems. And when we were done, we put 10 PSI back in each tire, flipped Dynamic Select back over to its Comfort setting, and set off for home with nary a new rattle, squeak or shimmy. It was as if none of it ever happened.

Sadly, this evaluation may be largely moot. Not because we did something wholly irrelevant to the typical G 63 ownership experience (though we did and it is), but because you won’t be buying one of these any time soon. Mercedes-Benz recently confirmed that virtually all of its V8-powered models will be on hiatus for the 2022 model year, including the G-Class. Considering there’s no G 250, that means no G at all next year. Some dealers are already slapping six-figure markups (yes, six) on the handfuls of 2021 G 63s they can stock, so imagine what a full year off might do?

Maybe things will return to normal in 2023, but even if they do, “normal” for the crowd that can afford an ostensibly off-road SUV with a chonky six-figure sticker price before “market adjustment” isn’t the sort of “normal” most car buyers are accustomed to. For us, the G 63 is a surprisingly delightful dance partner who happens to be well out of our league. That’s fine. One spin ‘round the dirt floor was more than enough.