A 10-year old Mercedes-Benz G-Class makes a run on the autobahn and proves it still got it. That is despite the brick-shaped body that makes the G-Wagen the perfect enemy of aerodynamics.

The offroader in the video posted by TopSpeedGermany on YouTube is a W463 in the 350d version. It thus comes with the OM642 3.0-liter V6 engine. It delivers 211 horsepower and 440 Nm (325 lb-ft). But is it as capable as it used to be 11 years after it rolled off the assembly line in Magna Steyr, Austria?

It went out on the autobahn, on a no-speed limit sector, to try out its capabilities. But before it hit the highway, when the TopSpeedGermany rep gets on board the G-Class, we get a glimpse of a dashboard that seems terribly updated in the era of glossy MBUX screens. But the black leather on the seats is far from looking bad and the grab handle in front of the passenger’s seat makes the cabin look familiar even to those who have recently discovered they have a weakness for the G-Class. 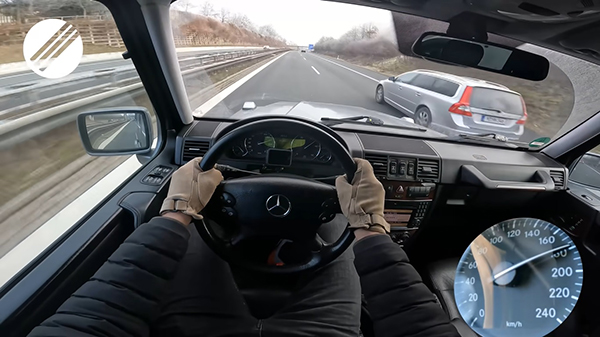 The door clicks in place, a sound that hasn’t changed much since the late 1970s, when the offroader entered series production.

The driver pushes the throttle pedal, but the needle of the speedometer is struggling. It doesn’t go much further than 180 km/h (112 mph), despite the fact that the speedometer is scaled all the way to 240 km/h (149 mph). It’s not easy to go against the laws of physics with a brick-shaped model with a diesel engine from more than a decade ago. Not to mention its weight. Actually, we do mention it. It’s 2,351 kilograms (5,183 lbs). Yeah, we shouldn’t have mentioned that, but it’s to defend the G 350d.

The followers of the YouTube channel are still impressed. “I didn’t know that panzers could go that fast”, one of them says. “Seating position is absolutely fascinating. You can see everything”, another one notices.