Hello everyone welcome back to the channel. This episode gives you a inside look at two current builds fresh out the shop. One is a brand new Mercedes Benz G63 delivered to us fresh out the dealership for a bunch of upgrades. We turned the car around in 3 working days, second part of the episode features a brand new Mercedes Benz S580 slammed on 22″ 3pc AL13 wheels and features an aggressive body kit with tons of exposed carbon fiber. The Sclass is for sale and ready to come to a new home.

And that is precisely what happened here with this brand-new Mercedes-AMG G 63 dubbed “The Hulk.” This is yet another custom build that quickly takes pride in both the inherent tough-SUV love attributes of the Mercedes-Benz G-Class and the aftermarket world’s propensity for screaming, loud, burbling, outrageous transformations.

And, of course, experts were behind the build project. The Los Angeles, California-based Platinum Motorsport Group prides itself on being a leader in the customization area for the past two decades and again shows us why – without even trying to remind us they are one of the longest-running partners of stars like Kim Kardashian and whatnot. This time around, the spotlight is on the build, not the owner. 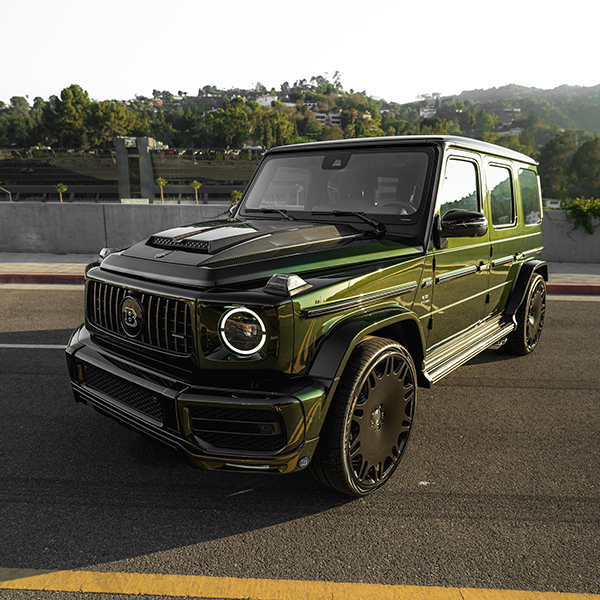 So, what we have here is a Mercedes-AMG G 63 (usually, a 577-horsepower 4.0-liter SUV) that incurred a green makeover that bodes well for its newfound nickname. But that is not all, since the G 63 was also “delivered to us fresh out the dealership for a bunch of upgrades,” according to the video description embedded below. Thus, it was transformed in record time (three workdays) and quickly lowered with a fresh coilover suspension setup on 24-inch Brabus M monoblock wheels, among others.

Of course, the Brabus touches did not stop there, as the G 63 also got treated to a front bumper add-on lip spoiler with LEDs, illuminated logos, an exposed carbon fiber hood scoop, Brabus logos, and an exposed carbon fiber rear spare wheel cover. Now, that is certainly going to stand out in any affluent G 63 crowd! Alas, if that Mercedes is not your SUV cup of tea, then perhaps Platinum’s second part of the vlog episode will be more to your liking.