Here in Munich we get our first look at the all-electric Mercedes-Maybach EQS SUV. This car is not only the future of Maybach, but also the all-electric future for Mercedes SUVs. The car is still in concept form, but could come as early as 2023.

It was nearly a year ago when we got a taste of the first all-electric Mercedes-Maybach vehicle destined for production, the EQS SUV. That was a concept vehicle, but a week ago we received spy photos of the first prototype spotted in public. Now, our friends at Motor.es conjured up an unofficial rendering based on those images, giving us a preview of the version folks can actually buy.

If you’re familiar with the Maybach EQS SUV Concept, this rendering should look very familiar. It draws heavily from the concept, primarily because we don’t expect much to change for production. The bold Maybach “grille” should retain the vertical chrome bars in a sea of black, distinguishing it from the Mercedes-Benz EQS SUV. The lower fasica is slightly different, with corner vents adopting rounded edges that better match the automaker’s current design language. The central vent down low might be a tad larger as well, allowing the bold Maybach grille to shrink just a bit compared to the concept.

There will be considerably less bling compared to the concept as well. This we already know, as the prototype sighting from August 5 captured a vehicle with camo wrap only on the front and rear. That’s not to say bright chrome on the B- and C-pillars couldn’t be a Maybach option, but we suspect the production model will be toned down in that respect. The rendering does depict a classic Maybach two-tone finish with spoke wheels, features that are very likely to see production. And while the rendering doesn’t offer a clear view of the rear, a single narrow strip containing the taillights is also quite likely. 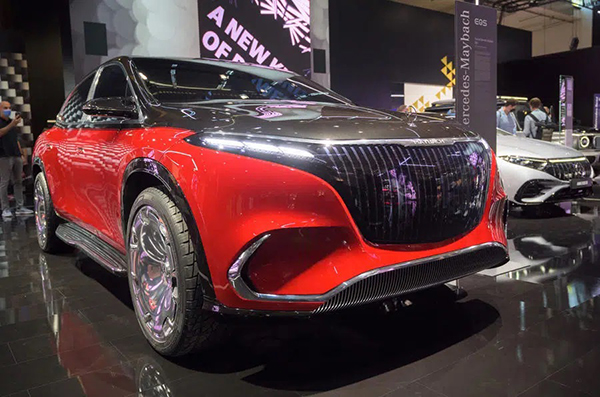 Upgrades to the interior versus the Mercedes-Benz version are still unknown. It’s safe to assume rear-seat passengers will have reclining seats with gobs of legroom, while everyone sits on quilted leather. Digital displays will have Maybach-specific screens, and driving it all forward should be a pair of electric motors with over 500 combined horsepower. Range could get close to 400 miles on a single charge.

There’s nothing in the rumor mill yet regarding a debut timeframe. 2023 was tossed around during the concept’s debut; considering the Mercedes-Benz version debuted earlier this year and our recent sighting involved a thinly camouflaged prototype, a reveal by the end of 2022 or early 2023 is certainly possible.

Want more information on electric Mercedes vehicles? Check out our special Rambling About Cars podcast episode featuring the EQXX and more, available below.