The European New Car Assessment Programme has once again published its list of the vehicles that performed the best in its battery of safety and crash tests this year and the Mercedes EQS shows up twice.

The vehicles are organized by class because ratings cannot be compared directly between different categories. A compact car that earns a five-star rating may not be exactly as safe as an SUV that earns five stars.

The list only contains vehicles that were tested in 2021, since star ratings become more difficult over time, making direct comparisons from year to year unfair.

In order to define the Best in Class, a calculation is made using the weighted sum of scores in each of the four areas of assessment: Adult Occupant, Child Occupant, Pedestrian, and Safety Assist. Euro NCAP only uses the scores of the base model vehicle, ignoring optional equipment for Best in Class honors. 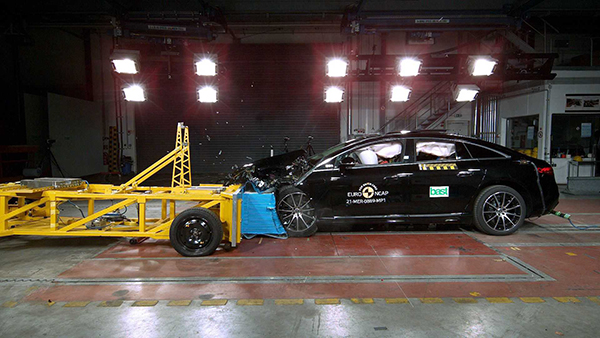 For the first time, Euro NCAP assigned a Best in Class award for electric vehicles, which the Mercedes-EQ EQS also won. Although this category does compare vehicles across many segments, the safety organization hopes that the award can guide consumers who are more interested in the means of propulsion of their next vehicle than they are in the size of it.

“We saw quite a number of new car models coming to the market, many of them electric or hybrid, and many of them achieving five-star ratings despite the demanding requirements,” said Dr. Michiel van Ratingen, Euro NCAP Secretary General. “Well done to the winners as well as to the runners-up, some of which were very close contenders for the top slot in their respective categories.”