It all started with a preview of the EQS’ avantgarde interior design, which will optionally be available with a remarkable-looking screen spanning across the entire dashboard. 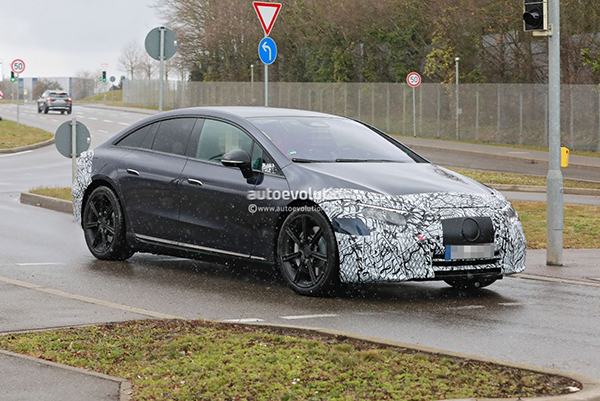 Called the Hyperscreen, the thingamajig is an industry first and looks gorgeous, although that situation might reverse once it gets filled with fingerprints from the driver and front passenger.

Set to be launched on April 15, 2021, a little over two weeks from now, the ‘S-Class of EVs’ is arriving in an increasingly competitive segment. It is currently populated by cars like the Porsche Taycan and Audi e-tron brothers, and soon by cars like the Tesla Model S Plaid and especially the Lucid Air.

Unlike all of its not-so-direct rivals, the 2022 Mercedes-Benz EQS will not go all-in with monstrous acceleration figures. However, it won’t be a slouch either, especially since there are talks of an AMG version to arrive later on as well.

With that in mind, the EQS will likely be the most spacious and most luxurious of the bunch, with its cab-forward design and a wheelbase longer than that of an S-Class to offer superior interior room compared to any rival.

Mercedes-Benz has already let it slip that the maximum range for the model will be over 700 km (435 miles) in the WLTP cycle, thanks to a 108-kWh lithium-ion battery designed and manufactured in-house and whose production has already started.

Part of the reason for the world-beating range in the top version is another record achieved by the EQS, which will apparently be the first production car in history to have a drag coefficient of only 0.20.

To put things into perspective, that means that only 20 percent of the air displaced by the front of the vehicle is slowing the car down, which is downright amazing for a road car.

Apparently, that Cd figure will only be attainable with an optional set of 19-inch aerodynamic wheels and in Sport mode, when the car will hunker down thanks to a standard three-chamber pneumatic suspension with self-leveling.

That’s still remarkable, but a lot of people are also interested in the luggage capacity of the model, since carmakers like Tesla have spoiled everyone with their rather accommodating front trunks, also known as frunks.

As it happens, the EQS will not have a frunk, but it will feature a cavernous rear trunk with easy access thanks to the high opening of the rear hatch.

The reasoning behind not adding a front luggage compartment is partly related to the car’s drag coefficient, believe it or not, since the cab-forward design and pointy front end do not leave a lot of room for luggage and a front electric motor.

That said, the rear luggage compartment should more than make up for the slightly annoying lack of such a feature, which is expected by everyone in the market for an EV these days.