Mercedes’ new pure-electric EQS saloon is on sale in the UK now, with prices for the company’s electric alternative to the S-Class starting from £99,995. This places it in the same league as the range-topping version of the Tesla Model S.

For now, the only version of the electric limousine on sale is the EQS 450+, which features a 107.8kWh battery and a 328bhp motor mounted on the rear axle. The system offers a 0-62mph time of 6.2 seconds and a maximum range of 453 miles.

Mercedes will also launch a more powerful EQS 580 4MATIC version over the coming months, which adds an extra motor on the front axle to bump the EV’s output up to 516bhp and 855Nm of torque. The extra grunt will also lower the car’s 0-62mph time to 4.3 seconds, although the top speed of both cars is capped at 130mph.

As yet, there’s no confirmed on-sale date for the firm’s first all-electric AMG model, the EQS 53, which made its debut at the 2021 Munich Motor Show. 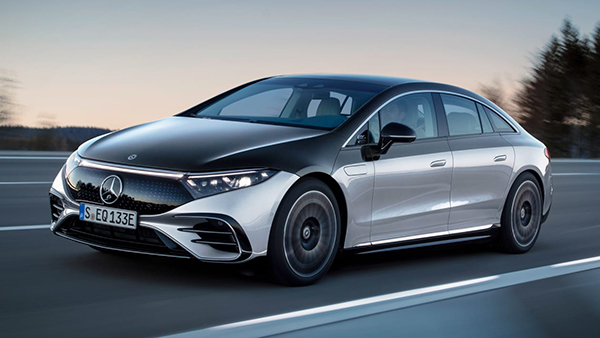 Inside, there’s leather upholstery, heated front and rear seats, a flat-bottomed sports steering wheel and two screens mounted on the dashboard – a 12.3-inch unit for the gauge cluster and a 12.8-inch infotainment system.

By spending another £7,000, (and taking the EQS’s starting price to £113,995), buyers can upgrade again to Mercedes’s AMG Line Premium Plus trim. This spec adds a head-up display, remote parking and gesture control for the car’s MBUX infotainment system.

Here’s where the range diverges. Mercedes has also designed a second branch to the EQS range, called Luxury, which focuses on comfort rather than sportiness. Upgrades over the AMG Line model include 22-inch alloy wheels, model-specific leather upholstery, wooden dashboard trim, comfort seats and a heated steering wheel.

Buyers can even have a more lavishly appointed version of this comfort-biased trim, called Exclusive Luxury. Priced from £113,995, the specification adds climate-controlled massaging seats, Nappa leather upholstery and Mercedes’s Air Balance system, which features an air ioniser and a function that diffuses fragrances around the cabin. 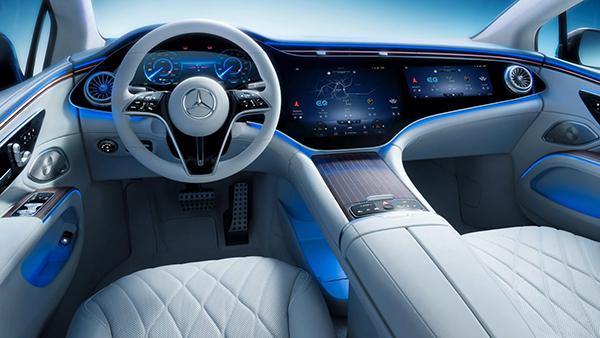 New Mercedes EQS: interior, practicality and infotainment
The design of the EQS’s interior centres around Mercedes’s 55.5-inch Hyperscreen infotainment system, which can be specified as a £7,995 optional extra on AMG Line Premium models and above, to replace the standard car’s dual-screen set-up.

The enormous digital space combines three separate displays. The first is a 12.3-inch driver display that shows info on speed and other driving data, the second 17.7-inch central display is for the main media and infotainment controls, while the third 12.3-inch unit is mounted on the passenger’s side of the dash.

The Hyperscreen system majors on artificial intelligence. For example, the EQS knows when the front passenger seat is empty and will change the display to a digital screen saver. The system also adapts to user behaviour and will suggest the right functions at the right times thanks to “context-sensitive awareness” with a “zero-layer” system that means users don’t have to scroll through menus and sub-menus to find the function they want.

Most inputs centre on the sat-nav, audio and Bluetooth functions, with the nav (which can schedule a route based on charging stations) always in the centre of the main display unit. However, Mercedes’ software engineers have grouped more than 20 other functions into what the brand calls “Magic Modules.”

This set-up can therefore suggest pulling in at a frequently used charging station when you’re passing and range is low, or suggest calling a contact that a user would usually phone on a given day of the week at a given time. The “Hey Mercedes” voice assistant is even more advanced and can now be operated from the rear of the car in the EQS too.

Of course, as a large saloon there’s plenty of entertainment for rear-seat passengers. The MBUX High-End Rear Seat Entertainment Plus package comprises a pair of 11.6-inch displays, with the option to share screen content across the car.

Back-seat passengers can also adjust functions such as the sat-nav, while a tablet that can also be used away from the car is optionally available.

There’s plenty of connectivity on offer as well, with over-the-air software updates (including for the battery management software) available, which will also allow owners to unlock or upgrade features on their cars digitally.

In terms of interior space, the new electric-only underpinnings mean an extremely long wheelbase relative to the length of the car. Rear-seat passengers should be well catered for when it comes to legroom, while the saloon’s boot offers 610 litres of space that rises to 1,770 litres with the rear seats folded down. 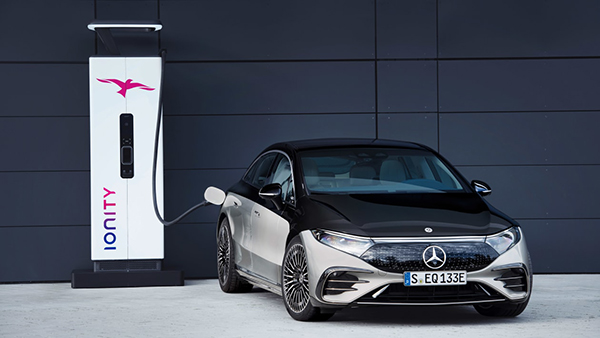 New Mercedes EQS: battery technology and charge times
The EQS marks the debut of Mercedes’s next-generation battery technology. The company says the new cells have significantly more energy density than the batteries used in its other electric vehicles, such as the EQC and EQA SUVs.

The battery system is also modular, giving buyers a choice of battery packs with either 90 or 107.8kWh of usable energy, with the extra capacity from the larger unit coming from bolt-on cells fixed to the side of the smaller battery. Both the EQS 450+ and EQS 580 4MATIC will be available with the larger 107.8kWh battery, offering a maximum range of 453 miles.

Mercedes’s 400-volt architecture can also accommodate up to 200kW DC rapid charging, meaning a 10 to 80 per cent charge for the 107.8kWh battery only takes 31 minutes. To put that into perspective, that’s 186 miles of driving range added every 15 minutes.

Buyers get an 11kW AC on-board charger as standard, although there’s the option to specify a more powerful 22kW unit. The former system takes around 10 hours to fully recharge the battery from 10 per cent capacity. The latter option cuts that charge time in half.

The EQS offers three different charging programmes: Standard, Home and Work, where features such as departure time, air-conditioning settings and maximum charge level can be pre-set.

There’s also a function called Eco charging, which reduces the load on the battery during top-ups to improve longevity. The battery’s charge state can be reduced to a pre-set limit, while charging can be delayed depending on departure time to take advantage of off-peak electricity, for example.

New Mercedes EQS: chassis and technology
The EQS is the first car to use Mercedes’ new modular electric architecture platform for large electric vehicles, called EVA. Like the EQS and EQA SUVs (which are actually based on adapted versions of combustion-engined vehicle platforms), the battery in the EQS is housed in the floor between the axles.

The chassis uses a four-link suspension set-up at the front and a multi-link arrangement at the rear, which Mercedes says is closely related to the S-Class in its design.

Adaptive air suspension is standard, with the system’s parameters being adjusted depending on the drive mode selected; there’s a choice of Eco, Comfort, Sport and Individual. The car’s ride height will also drop at speeds above 74mph to improve the EQS’s aerodynamic efficiency and increase range

Four-wheel steering is also fitted as standard to boost the agility of this 5.21-metre long limousine. The rear wheels can turn up to 4.5 degrees as standard – or by as much as 10 degrees as an option – to help improve manoeuvrability at low speed and stability at higher speed on the motorway.

Other clever functions include automatic door opening. When the driver approaches the car the door handles will first slide out of their recesses, opening automatically. Users can also open the rear doors from the new MBUX infotainment system, with this tech part of the Premium Plus Package. 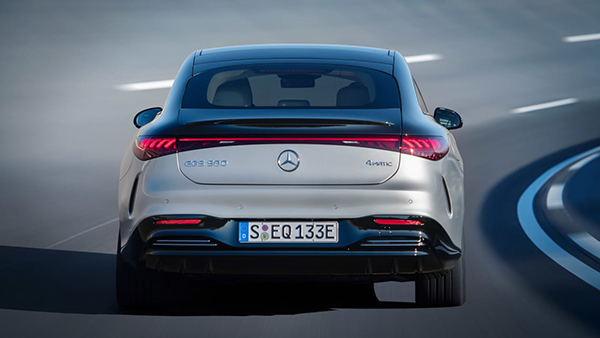 New Mercedes EQS: safety and driver assistance systems
Given how many safety systems the brand’s S-Class flagship has ushered in over the years, it’s no surprise that the EQS offers many innovations and systems to protect occupants.

The list of driver assistance systems includes: adaptive cruise control that’s reactive to speed limits and the level of charge in the battery, accelerating more gently if there’s less energy on offer.

Active Steering Assist also keeps the car in your lane on the motorway with subtle steering intervention at up to 74mph, while Active Lane Change Assist helps the driver to change lanes if the system detects the adjacent lane is empty and the road markings allow the manoeuvre.

Attention Assist monitors driver behaviour and suggests taking a break if it senses a change in your driving, while Active Brake assist with cross traffic function automatically applies the brakes to help avoid or mitigate the impacts of a collision.

Active Blind Spot Assist is self-explanatory, while exit warning will let you know if you’re about to side swipe a bicycle to the inside of the car. Evasive Steering Assist boosts your inputs to help avoid a collision, and there’s all manner of park assist tech, such as Intelligent Park Pilot, which allows the car to park itself in car parks with the right infrastructure.

The EQS also comes with clever automatic doors with an obstacle detection system, which means they won’t open into the path of a car or bicycle approaching from behind.

However, the big tech advance for the EQS is Mercedes’ Drive Pilot system, which will allow Level 3 “eyes-off” self-driving at speeds up to 37mph – think slow moving motorway traffic. Mercedes says the system “relieves the burden on drivers and allows them to carry out secondary activities” where legal, such as surfing the internet, making more effective use of their time.

The Drive Pilot system can even deal with different traffic situations on its own without input from the driver. However, it’s only going to be legal in Germany to begin with. 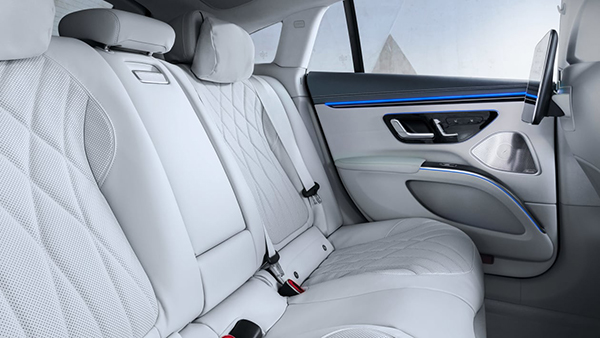 New Mercedes EQS: design and sustainability
Like the rest of the EQ range, although the EQS is Mercedes’ first electric saloon car it too features a prominent ‘black panel’ at the front of the car.

This gives the EQS its family resemblance to the other EQ models, and with much less cooling needed for an EV also helps to achieve an incredibly low drag coefficient of just 0.2Cd (a world record, according to Mercedes), helping boost aerodynamic efficiency and range.

The long, arcing “one bow” roof and cab forward stance make the most of the new underpinnings to maximise space inside, with the architecture allowing a flat floor to house the battery.It’s a simple, smooth look with clever lighting tech that helps boost safety too, while the coupe-like rear end features tail-lights with a curved, 3D helix design.

There are different specifications for the outside of the car which means customers can personalise the look of the EQS. The different trims modify the front and rear aprons, side sills and alloy wheels, which range from 19 to 22 inches.

Efficiency and sustainability are at the core of any electric car and Mercedes claims that 80kg of material in the EQS is made from recycled or renewable raw materials to help reduce the car’s carbon footprint. It’s just one area of a number of different fields – including battery sourcing and production methods and techniques – that Mercedes is optimising to reduce the EQS’s environmental impact from start to finish.

A HEPA (High Efficiency Particulate Air) filter is available as part of the optional Energizing Air Control Plus package that cleans the cabin air of certain harmful gases and helps protect occupants from some viruses and harmful bacteria.