Mercedes-Benz EQS is a technological tour de force, and it is regarded as “the S-Class of electric cars.” While we have yet to drive it, we have heard good things about it from fellow journalists. With that in mind, one wonders how well it behaves in the famous moose test.

The test was carried out by the Spaniards at km77.com, and the example they were offered to test was a 580 4Matic version of an EQS. The Mercedes-Benz EQS 580 4Matic is a dual-motor, all-wheel-drive version of the electric sedan from the German marque.

It offers a total power of 523 horsepower and a peak torque of 855 Nm (603.5 lb.-ft.), and these resources are enough to take the luxury sedan from naught to 62 mph (100 kph) in just 4.3 seconds. Top speed sits at 130 mph (209 kph), which is more than enough for any public road, including Germany’s famous Autobahn that has unrestricted bits.

The tested example was fitted with Goodyear Eagle F1 Asymmetric 5 MO 265/40 R 21 105 H tires on its 21-inch wheels. Moreover, the vehicle was also equipped with a rear-axle steering system, which can turn the rear wheels ten degrees to the left or the right, depending on what its computers deemed necessary for more agility.

As a reference, the best result obtained by the previous generation of the S-Class was an entry speed of 74 kph (45.9 mph). As the Spaniards noted, the S-Class is lighter than the EQS, which helped, but not enough to pass with 77 kph (47.8 mph).

Now, two other key factors need to be considered here. Just like many other electric vehicles, the EQS is not lighter than its conventionally powered counterparts. 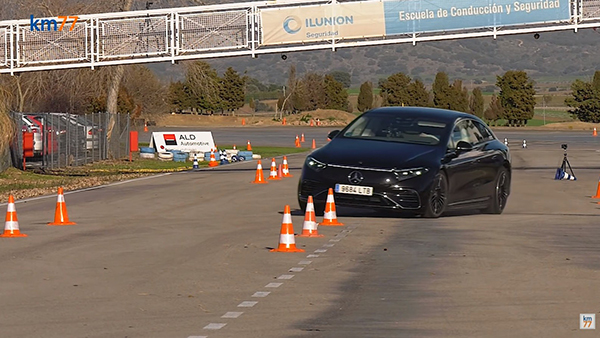 While vehicle dynamics play an important role in this test, it is essential to understand that the moose test is conducted under a set of rules, which are represented by the ISO 3888-2 norm.

The test route is composed of three sets of “gates”, A, B, and C, which are made of three pairs of cones each.

As you can imagine, vehicle dynamics, weight, suspension settings, tires, and ESC operation play a key role in this equation. However, the test is especially hard on longer and wider vehicles, and it gets even trickier if they tip the scales more than some of their counterparts do.