Mercedes-Benz says the EQS is the electric counterpart of the S-Class. Is it? Everyone wants a clear answer to that question. We tested the top regular version, Mercedes EQS 580 4Matic+ (there is also an AMG EQS), with two motors and 523 PS (516 HP).

For Mercedes, S stands for a class of its own. It would have probably been a simple matter to fit an electric drive to the body of the new W223. But that would have led to a lot of compromises, not necessarily in terms of interior space, but in terms of efficiency and aerodynamics, crucial in an electric car. And that’s why Mercedes took the radical way of developing a dedicated electric platform for the EQS, which it considers the electric counterpart of the S-Class.

We had the opportunity to test the top version, the Mercedes EQS 580 4Matic+, on a combined route that included motorways, national roads, mountain climbs and jammed cities. We covered 700 km in 3 days, in changeable weather, with both sunshine and heavy rain. At first glance, the EQS doesn’t look as imposing as the S-Class, although the dimensions are almost identical to the long-wheelbase S-Class. The lower bonnet, more raked windscreen and highly aerodynamic silhouette make it look a little more compact, even though it is not. But the design has been dictated by aerodynamics, with the CX of 0.20 being exceptional for a series production car.

More comfortable than the S-Class
With adaptive air suspension, 10-degree integral steering (standard 4.5-degree, 1547 euro optional, present on the test car), Torque Shifting function for metering engine torque between the axles, the EQS has all the best qualities of the S-Class, but also of an electric car. With 21-inch wheels included in the AMG package, the EQS runs majestically on the highway and, in Comfort mode, it floats above the asphalt almost like a Rolls-Royce.

In direct comparison to the S 500 with the same 21-inch wheels that I drove last year, the Mercedes EQS 580 4Matic+ is more comfortable. And that comfort interferes especially over short bumps, which it absorbs better. Over long bumps, it floats, and anyone who doesn’t like that swaying dolce vita-like ride can hook up the Sport mode when running on a highway with good asphalt. In Sport mode, the suspension stiffens, but not overly so, because the EQS is a private jet for the tarmac, not a fighter jet. 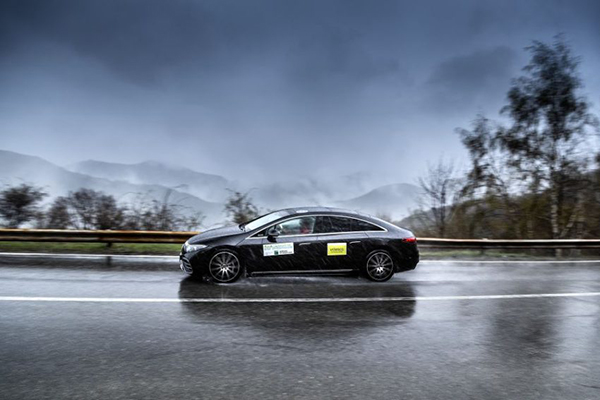 The sprints are absolutely blistering, 2.0/2.5s for the 60-100/80-120 km/h sprint (37-62/50-75 mph), 0.5 seconds faster than the S 500. Overtaking a truck practically takes little more than the blink of an eye, and if you’ve ordered the Burmester audio system, you also get AMG’s thermal engine sound (Roaring Pulse mode, activated over-the-air, alongside Silver Waves and Vivid Flux). It’s even refreshing to hear a familiar sports-engine rumble, because otherwise, you wouldn’t hear anything.

Aerodynamic noises are minimal, the tires feature foam for noise dampening. And if it weren’t for the artificial sound under acceleration, you’d feel like you’re in a spaceship, traveling through space where you don’t perceive speed. And the Mercedes EQS 580 4Matic+ picks up some speed. It hits 210 km/h (130 mph) quickly even on motorways, at which point the power indicator on the classic instrument cluster mode jumps to 100%. But after the speed stabilizes, it drops to 30%. It’s obvious that Mercedes has limited the top speed, because the 523 PS (516 HP) certainly allows a top speed of 250 km/h (155 mph), similar to the that of the S-Class.

After motorway and national roads, we arrive on a mountain route in pouring rain. We engage the Sport mode and climb at a slightly brisk pace. The EQS turns unusually short thanks to the integral steering that makes you feel like you’re behind the wheel of a much smaller car. The S-Class-like steering offers plenty of comfort and feedback, even if it doesn’t have a very short gear ratio.

Although the rear engine is much more powerful (255 kW, compared to 135 in front), if you push too hard into corners, the front axle tends to go outwards, but the rear always remains neutral and gives superb grip. The explanation is that Mercedes has tuned the EQS for safe, understeering behavior. 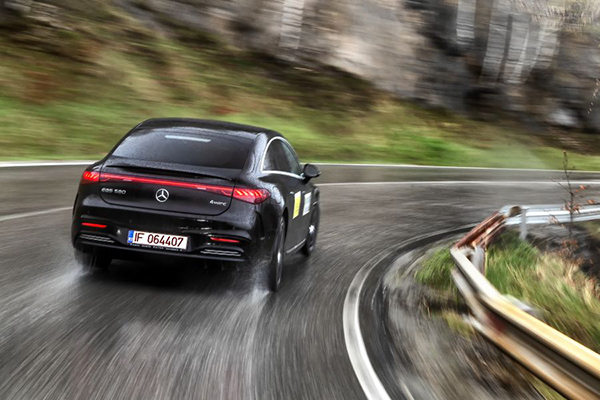 On the descent from the mountain peak, you start to feel the inertia of almost 2.6 tons (5,200 pounds) a little. The car run very safely through corners, leans a little, the ESP quickly cuts out the slightest hint of grip loss, and works perfectly with the Torque Shifting function. The feature manages the engines torque between axles. However, it feels like you can get through corners faster than in an S-Class. And the Mercedes engineers deserve an award for the way they’ve dosed the power development and its coordination between the two engines.

The brakes bite decisively, and Mercedes EQS 580 4Matic+ brakes just as short and brutal as the S 500. And despite its greater weight, after the descent from the top, the brakes worked just as well, not at all affected by fade. And the ride from the top was similar to the landscape from the Grossglockner. There’s a slight transition between electric and hydraulic braking, but compared to other electric cars, it’s slight. However, braking distances are as short as those of top sports cars, just 33.5 meters (110 feet) from 100 km/h (62 mph).

We drove then through cities with narrow streets and we felt the beneficial effects of the integral steering with such a large steering angle. The EQS turns in just 10.9 meters (35.7 feet), just like a compact car. So you can slip through narrow city streets with ease.

Luxury range
An electric luxury limousine is designed for long journeys, so a long range is essential. The 108 kWh battery promises a lot, but often just one big battery isn’t enough. And that’s where the aerodynamics come into play, as Mercedes justifies why a dedicated electric platform was needed. In Eco mode and without excess, energy consumption was just 21.4 kWh/100 km, close to that of a compact electric car, which has half the power of the EQS. Sensational!

That means you can drive up to 500 km (311 miles) without worry, a boundary reached by very few electric vehicles. But that’s not all. In general, with any electric car, driving a little faster significantly increases consumption. And on the motorway, if you’re going with the legal speed of 100 or 130 km/h (62 or 80mph, depending on the country), the range decreases significantly. But not in the case of the EQS. Driven normally, like any other car, it manages a consumption of 29 kWh/100 km, corresponding to a range of 400 km (249 miles). 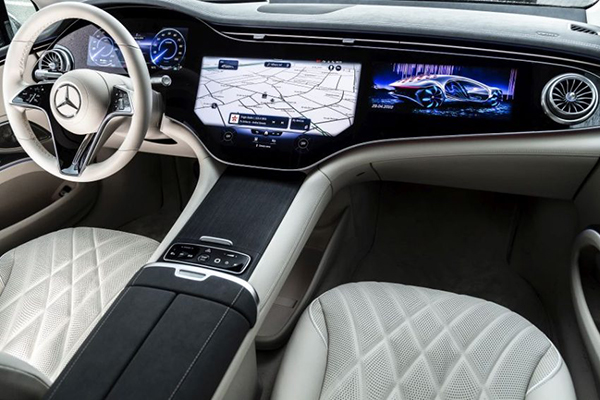 And if you don’t have the ambition to accelerate from 0 to 100 km/h (62 mph) in 4.2 seconds, you can opt for the EQS 450+ version. It sports the same big battery and a single 333-PS (328-HP) engine on the rear axle, with which editors from auto motor und sport magazine have managed to cover more than 600 km (373 miles) without stopping at the charging station. If you still need to charge, the EQS can be charged with 200 kW from DC stations. This means you need only 33 minutes to charge from 10 to 80%. At home, connected to a wallbox, the EQS can be charged with 11 kW in about 10 hours or even 22 kW in just 5 hours.

Like other electric Mercedes models, the Mercedes EQS 580 4Matic+ has three levels of recovery, plus coasting mode and D Auto, where the recovery level is linked to the navigation system, and the car brakes without the aid of the brake pedal if approaching a traffic light or crossroad.

Roomier than an S
The interior is simply huge. Up front, you sit in the same superb dynamic multicontour seats as in the S-Class, with the same massage modes, from relaxing to vigorous. If you look at the wheelbase of the long S-Class version and the EQS, they are comparable. But on the EQS, the knee room is 70 mm more in the rear seats! Basically, you sit like in a Maybach, on the same excellently contoured backrest, with electric adjustments and climate control for the exterior rear seats. Only the interior height is 25 mm lower, although the EQS is 10 mm taller than the S-Class. The floor-mounted battery has taken away a little of the interior height, but there’s still plenty of it in the rear, measuring 950 mm.

The boot is huge, too, primarily impressive with its immense length and very easy access. thanks to the generous tailgate. At 610 liters, the boot is 60 liters bigger than that of the S-Class. And there’s even room under the floor for charging cables packed in two stylish bags, as you’d expect from a luxury model. Folding the backrest down from the buttons located in the boot gives you a huge 1,770 liters of volume. So there’s no need to worry if you’re going on a longer holiday, because there’s a lot of room in that trunk. But you can’t put too much heavy stuff in, as the payload is only 460 kg (1,014 pounds). That’s a bit low for a 2.6-ton (5,200 pounds) curb weight. 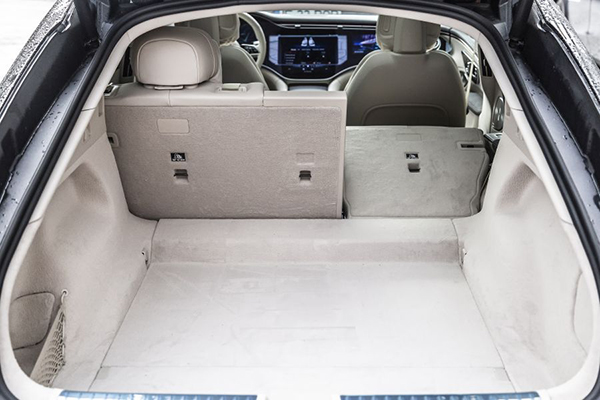 Unlike the S-Class, the EQS 580 4Matic comes standard with a so-called Hyperscreen, which is actually made up of three displays, grouped under a Gorilla Glass. So in addition to the 12.3-inch instrument cluster display, which also has electric drive-specific modes, the front passenger also gets his own display. Meanwhile, the infotainment system gets a slightly curved 17.7-inch OLED screen with Zero Layer technology. What does it mean? For example, no matter what function you access, the navigation map always remains in the background so you can access other functions without losing sight of your direction of travel.

The MBUX system learns the habits of the driver saved in the system and has a kind of artificial intelligence that takes account of their actions. If you made a phone call on a certain day at a certain time, or if you use the hot stone massage when it’s cold outside, the MBUX system reminds you of these things on that day of the week or when the temperature drops below a certain value, in case you want to activate them again. Mercedes wants to simplify things, but maybe it’s not always good for the MBUX to remind you of all this.

And there’s more. With the HEPA filter, for absorbing fine particles, you can always have clean air in your car. How do you know? The MBUX displays indoor and outdoor pollution levels. At one point, I drove behind a truck. Outside, the pollution level showed 22 ppm (so, yellow), and inside, thanks to the aforementioned filter, it was only 1.5 ppm. So the EQS can run in a sea of diesel cars and offer a great air quality inside. You’ll just have to change the filter more often.

Without a doubt, the interior is on a par with that of the S-Class. Mercedes has kept its promise. The EQS is the genuine electric counterpart of the S-Class. It’s the crème de la crème of electric cars. And it couldn’t be any other way, considering that Mercedes EQS 580 4Matic costs a fortune, with a listed price of 139,479.90 euro (125,900 USD in the U.S.). It is almost the same price a that of the Mercedes S 580 4Matic in a long-wheelbase version, in Germany and 8,000 USD more than the same Mercedes S 580 4Matic in the U.S.. But the Mercedes EQS has a slightly more comprehensive standard equipment package than the S-Class (Hyperscreen and 4.5-degree integral steering as standard).

Verdict
The EQS is an exceptionally quiet, comfortable and dynamic limousine with huge space. Thanks to the integral steering, it is extremely agile despite its very heavy weight. Assistance systems are at the highest level.