The Mercedes-Benz EQS 580 Sedan (~$169,950 CAD as specced, $133,655 USD as specced) is a luxurious new EV that aims to raise the bar for what luxury means in an electric vehicle. Inside, it has what Mercedes proudly calls the Hyperscreen. A 56 inch wide piece of glass that houses multiple different screens that are seamlessly integrated together. This makes for a gorgeous design for the driver and their passengers, and it combines extremely well with the vibrant ambient lighting. But interior aesthetics aside, how does the EQS 580 perform as a luxury EV? And with an ‘S’ in its name, can the EQS match the comfort and style of the legendary S-Class? Thomas and James aim to find out!

Mercedes EQS Review // Not The S-Class You Think It Is

While some people are still joking around about climate change, facts are here and easy to see. For example, they noticed that the temperature around Los Angeles was the same as in Toronto at the time of recording their video this year. True, the sun was up in the sky, and the weather looked fine, but the thermometers showed the cold reality.

Switching to electric cars should be a better idea. Maybe this alone won’t stop climate change, but it’s a good step, especially when it led to the Mercedes-EQS 580. The Throttle House team, Thomas and James, found out that the EQS is not as quiet as a regular S-Class on the flat concrete highways around LA. 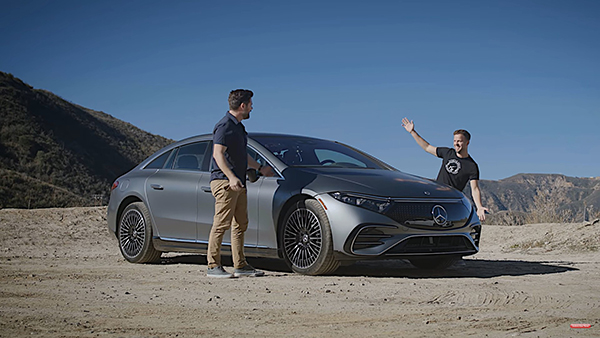 Sure, the car can stay in the middle of the lane and can change lanes if the driver engages the turn signal. Hopefully, this feature will make us see more cars blinking on the roads than before. But the EQS is unique in another way: by the sounds it makes. They think it sounds like the machines from “War of the Worlds,” which we don’t know if it’s good or bad.

But there is a twist in the embedded video below when the two are bringing another luxury electric car to the party. Something built in the U.S., a car that can compete on equal technical terms with the EQS. We won’t spoil the pleasure of finding which is the other car. Sure, maybe the EQS doesn’t have the longest range on the market, yet it manages to get up to 340 miles (547 km).

From behind the wheel, the luxury feels like a well-tuned, twin-turbo V12 in terms of performance, albeit it’s silent. Only the rolling tires on the road and the weird noises emitted through the premium sound system might bother the occupants. Yet, those are subtle. At $133,655, it better be worth the money and provides more than the S-Class, its ICE sibling and main competitor.