We’ve been waiting for one the oldest car brand in the world to come out with their first dedicated electric car and for 2022, it arrives in America in the form of this Mercedes EQS 450 and Mercedes EQS 580. With a large 108 kWh battery pack, the Mercedes EQS is capable of up to 350 miles on a full charge, can DC Fast Charge up to 80% in just 31 mins, and can sprint to 60 in as little as 4 seconds. For those of you who want more speed, you can wait for the EQS AMG coming next year which should shave that time by a second. Its a near perfect blend of luxury, electrification, and tech with tis massive 56.7″ hyper screen.

Mercedes-Benz EQS has touched down in the U.S. in 450+ and 580 4MATIC guises and Redline Reviews recently had the opportunity to put the flagship model through its paces.

The reviewer only had this press car for a couple of hours and, therefore, wasn’t able to analyze every single feature of the EV in detail. Nevertheless, he was able to test it out on a selection of different roads and explored some of the car’s key features. 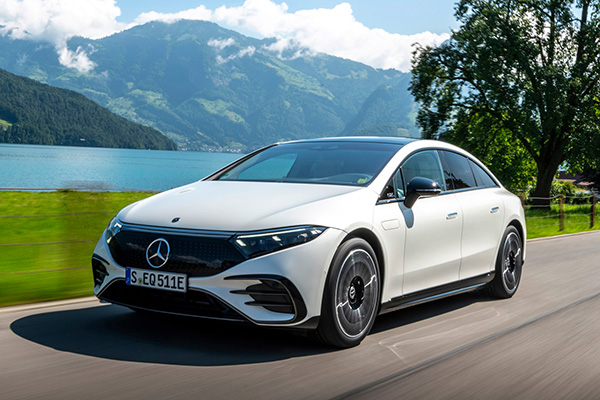 During the first half of the review, we are offered a tour of both the exterior and interior of the sedan. Obviously, the cabin of the EQS appears to be a great place to spend time. It isn’t quite as spacious as the S-Class but it is certainly more luxurious than any other electric sedan currently on the market. The example tested was also equipped with the Hyperscreen that encompasses an all-digital gauge cluster, a massive central infotainment screen, and a third display for the front-seat passenger.

After jumping into the driver’s seat, the reviewer starts off by testing the car’s acceleration. He is able to hit 60 mph (96 km/h) in 4.4 seconds which isn’t Tesla Model S quick but is still more than fast enough for a luxurious five-seat sedan that transports occupants in extraordinary comfort. As the model tested was the EQS 580 4MATIC, it has a 107.8 kWh lithium-ion battery pack with dual electric motors combining to produce 516 hp and 631 lb-ft (856 Nm) of torque.