Mercedes-Benz’s electrification push will continue with three new hybrids planned for a release later this year together with the fully-electric EQA crossover. A product presentation from December 2019 hinted we could also see the EV flagship of the brand – the EQS sedan, before the year’s end but nothing has been confirmed yet. It turns out there might be yet another electric sedan in the works and this video could be our first look at it.

The clip shows two Mercedes prototypes and one of them is obviously the EQS. The other one, however, features a modified and shortened body, which hints we could be looking at the upcoming EQE EV. Think of it as the electric version of today’s E-Class, similar to what the EQS will be for the S-Class.

There are some similarities between the two test cars and the most obvious one is the overall shape. It’s likely that the EQE could also receive a sleek four-door coupe body style but with shorter overhangs compared to its more luxurious counterpart. The position of the third brake light seems to be the big giveaway here as it’s located on the boot lid in the EQS, while the EQE has it positioned on the rear window. 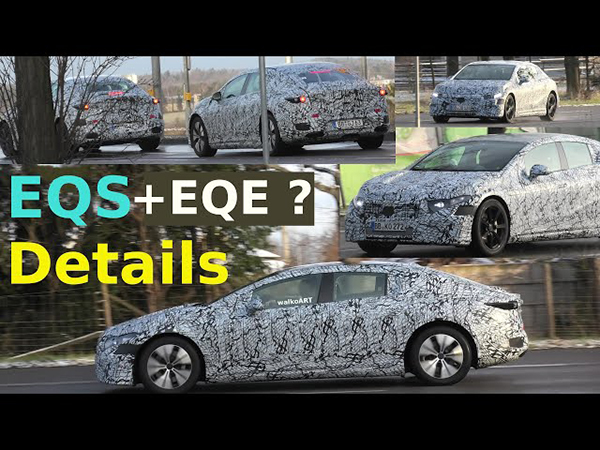 According to preliminary information, the EQE will be an electric and a sportier take on the E-Class. It will come exclusively in an AWD layout with one electric motor for each axle and a combined output of more than 402 horsepower (300 kilowatts) and 564 pound-feet (765 Newton-meters). Large batteries should provide a comfortable range between charges of around 373 miles (600 kilometers).

In addition, advanced technologies will give the EQE semi-autonomous functions. A four-wheel steering and a sophisticated air suspension offering a silky-smooth ride will also be available.

Given Mercedes’ current tight schedule of launching electrified models, we don’t expect to see the EQE before the end of 2021. Just like the EQS, it will be made in Germany at the new Factory 56 plant located in Sindelfingen.