After seeing the Mercedes-Benz EQS together with the EQE and EQS SUV in a teaser, a new spy video of the three surfaced once more. However, there’s a fourth camouflaged Mercedes vehicle on the scene.

Is there another model in the mix? If you are wondering about the identity of the fourth electric vehicle in the convoy, better look closer because it appears simply as another EQS car.

From the spy video uploaded by walkoARTvideos on YouTube, the third and fourth cars lined up during the traffic stop at the intersection are pretty much similar. Based on the earlier official teaser of Mercedes, we are certainly looking at the upcoming production versions of the EQS cars. 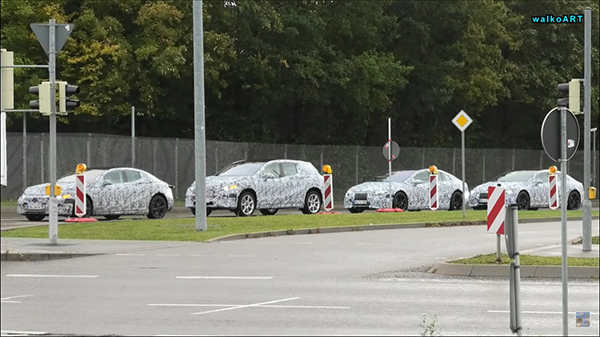 We don’t have any details yet about the two, so it is possible that Mercedes was only testing identical units of the car at that time to gather as much data as possible. It is also likely that the subjects are from the different trims of the range with varying outputs. The latter is obviously a more exciting outlook.

What we know so far though is that the EQS will get up to 700 km electric range based on WLTP figures thanks to the dedicated AVA (Electric Vehicle Architecture) platform for EVs by Mercedes.

Mercedes is looking to compete against the Tesla Model S with the EQS by topping the 610 km range of the American EV. Furthermore, it should be worth noting that the German automaker presents a more luxurious alternative than its rival.