The hot S-Class has become something of a Mercedes staple. Whether it’s the three-pointed star themselves shoehorning a giant V8 into their biggest saloon or, in more recent times, AMG, those captains of industry who simply cannot be late for the next meeting have been sorted for decades.

However, with the petrol engine running on borrowed time it’s the battery powered Mercedes-AMG EQS 53 that previews the next generation of ludicrous limos from the brand. Each axle gets its own electric motor to give a maximum total output of 649bhp as standard or a whopping 751bhp if you opt for a Night Edition with the optional Performance Package.

Even the ‘regular’ EQS 53 we’ve got here can crack 0-62mph in a mere 3.8sec, dropping to a mighty 3.4sec if you’re willing to shell out another £8,995. Thankfully you don’t just get a few lines of code altered for your money, you also get composite brakes with yellow callipers and some carbon fibre trim. 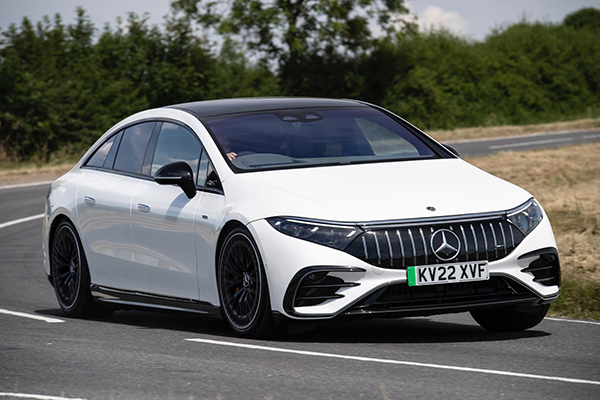 That’s chuffing quick, but does the range suffer?
With twice as many motors and horsepower as the rear-wheel drive EQS 450+ and the same capacity battery pack, range is a fair chunk worse even if you drive conservatively. The maximum WLTP quoted figure drops from an exceptional 453 miles to a still decent 358 miles, although we’d expect to knock at least 40 or 50 miles from that in the real world.

Thankfully you can still top up your AMG-fettled EQS at a speedy 200kW if you find a potent enough DC rapid charger, giving a 10-80% charge time of just 31 minutes. That makes long distance travel reasonably pain-free if you’re able to pick the right chargers. Get it wrong and you’ll be waiting 15 and a half painful hours to get from 10-100% at 7.4kW or a slightly less awful 10 hours if you luck out and discover an 11kW fast charger. 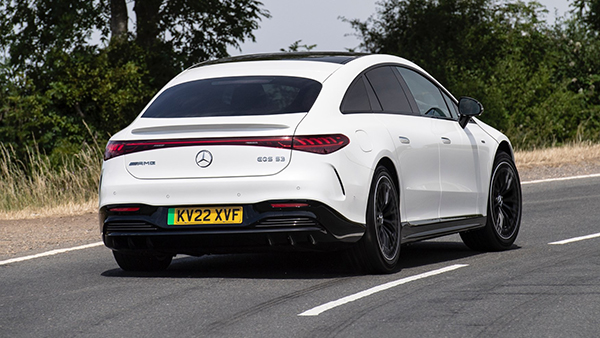 Anything else I should know?
Disappointingly you can’t get the Rear Luxury Lounge package on the Night Edition, only the more luxury focussed 53 Touring. That’s a shame as the standard rear seats don’t recline, leaving those in the back sat rather upright.

All EQS 53s do get the full Hyperscreen digital display as standard. Comprising of a central touchscreen, another for the front seat passenger and a digital instrument display, we’d swap it for a few more physical buttons in a heartbeat.

If you want to know more about that or the space on offer, have a look at our main Mercedes EQS review. If you’re more interested in how the EQS 53 drives, stick with us. 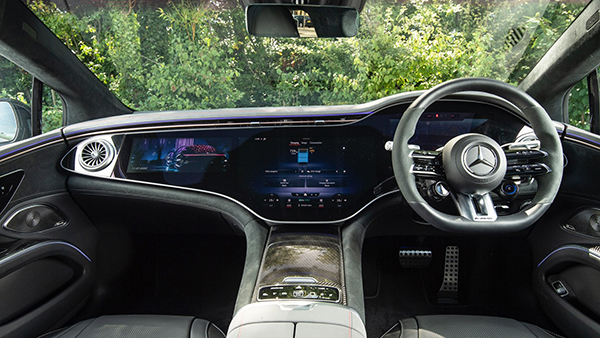 Go on then, should the Taycan be worried?
If we’re talking straight line acceleration, yes. Even without the Performance Pack the EQS 53 powers off the line with the kind of violence that makes you forget to breathe momentarily. Even considering the standard launch control and 649bhp output, it’s bloody impressive for over 2.6 tonnes of luxury limo.

All EQS 53s also benefit from an AMG fettled air suspension system with rear steering capable of up to nine degrees of lock. It might not sound like a lot, yet you really feel the car pivot around a point just behind the front armrest at lower speeds. It works well in getting the nose turned into slower bends and really comes into its own when you’re manoeuvring, reducing the turning circle to that of a family hatchback.

Unlike some systems we’ve experienced – a BMW X7 springs immediately to mind – the EQS always feels predictable and never unnatural. Feel and feedback? Most of that is filtered away before it ever reaches the steering wheel, although that is in keeping with the luxury remit. Instead, you rely on the predictability and precision of the system to place the EQS with ease.

That allows you to confidently explore the huge reserves of grip Michelin provides and beyond. It won’t be persuaded fully sideways, at least not without a send this writer was unwilling to commit to, although it’ll happily leave two pairs of black lines on corner exit if you poke it with a stick. Even so, it’s a car that’s exceptionally capable rather than outright fun. 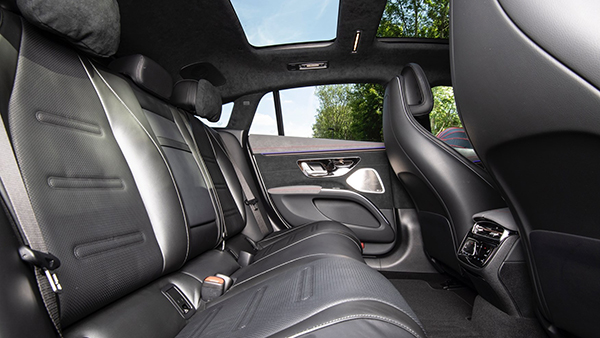 What’s the problem, then?
Put simply, the Taycan is the more involving, entertaining thing. You’re more acutely aware of the EQS’s bulk during direction changes and it’s less playful at and beyond the limit. It’s also much firmer than a regular EQS, good because it virtually eliminates some of the float that effects the standard car, bad because you’re far more aware of surface imperfections.

But then the Taycan and EQS are two very different things, much like comparing a Panamera with an S-Class. You pick the former because it’s serious performance car with space for four grown adults, you pick the latter because it’s a serious luxury car that just so happens to be fast. 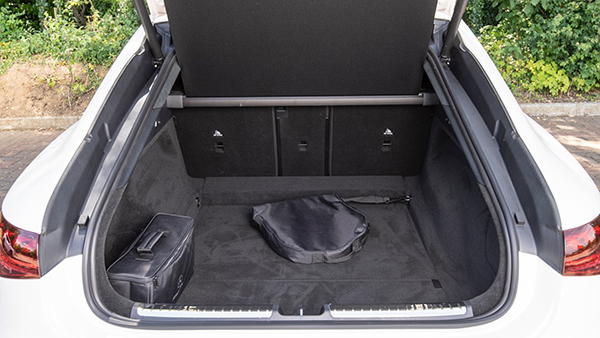 Mercedes-AMG EQS 53: verdict
Those people that previously bought AMG S-Classes will probably feel right at home in the EQS 53. They’ll appreciate the swagger the AMG body styling brings while the firmer ride is a constant reminder of the ridiculous performance that’s a mere ankle flex away.

However, those looking for a proper performance EV that uses more than just G-force to make you grin are better served elsewhere. A Taycan is nowhere near as roomy inside, yet it still feels sufficiently luxurious, is better screwed together inside and proves genuinely entertaining.

Of course, ‘53’ is generally reserved for second-rung AMG performance models, so we wouldn’t be surprised to see an even more potent ‘63’ further down the line. Even so unless it can drop a few hundred kilos of weight, it’s unlikely to put a bigger smile on your face.