Mercedes-AMG and Lewis Hamilton are introducing a new era with our first all-electric car, the extraordinary Mercedes-AMG EQS 53 4MATIC+. Performance, luxury and technology coming together. With power on another level, electric has found its voice.

All dressed in black, perfectly matching the black sedan, Lewis Hamilton walks around the new Mercedes-AMG EQS 53 4MATIC+. He touches the aerodynamic silhouette of the sports electric sedan. The handles pop out when he puts his fingertips on the one from the driver’s side and the pro driver takes a sit in the plush cabin.

The Mercedes-AMG EQS 53 4MATIC+ is the company’s first electric. Once the driver pressed the throttle paddle, he’s on his way to a top speed of 250 km/h. It only takes 3.4 seconds to hit 100 km/h (62 mph) from a standstill. It is all thanks to the two synchronous motors with permanent magnets that develop 658 horsepower and 950 Nm of torque. In Race Start mode, the numbers go all the way to 761 horsepower and 1020 Nm of torque if the customer ticks the AMG Dynamic Plus package box. 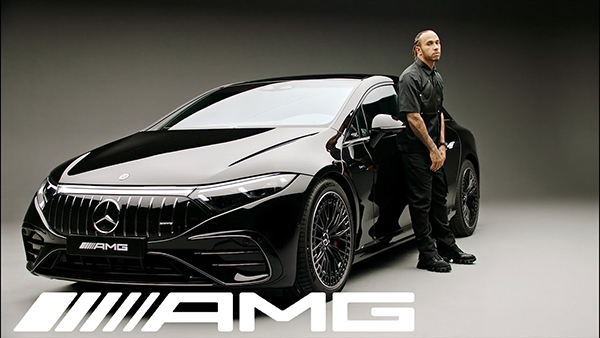 Lewis Hamilton, teammate with the Mercedes-AMG EQS 53 4MATIC+, chasing a new championship title
On the same team, Lewis Hamilton is a seven-time World Champion, chasing his eighth. The next race is the Aramco United States Grand Prix, at the Circuit of the Americas in Austin, Texas. Red Bull’s Max Verstappen is currently in the lead, while the British driver is six points behind.

Lewis has also been involved in the development of the Mercedes-AMG ONE hypercar. After multiple delays, the 2.75 million euros turbo hybrid model with Formula One-inspired technology should enter production next year. Only 275 units will roll off the assembly line.

The F1 driver recently shared several photos of himself in a truck, claiming that nobody delivers as fast as he does. It is obviously true since he is an F1 record holder as well.