Fresh off its debut, the 2022 Mercedes-Benz EQS Sedan ushers in a new era for luxury electric vehicles. Much like its gas-powered S-Class counterpart, the EQS shows off the best of what’s technically possible in a car, with new features like the massive 56-inch Hyperscreen. Mercedes announced that the EQS Sedan would arrive in two flavors: the EQS 450+ and EQS 580 4MATIC. The former produces 329 horsepower and 406 lb-ft of torque, while the latter steps it up with 516 hp and 611 lb-ft. 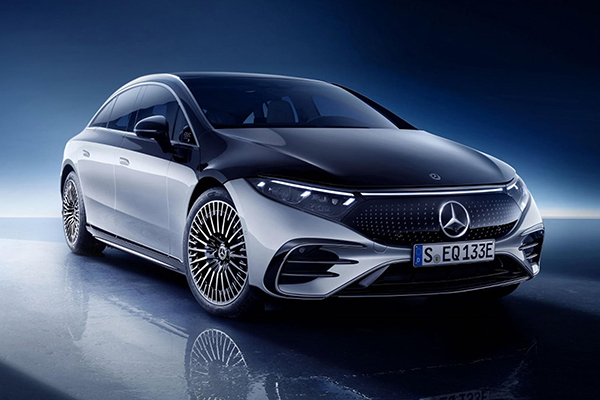 These models are plenty quick, with 5.1 and 4.5 second 0-60 mph times, respectively. However, recent trademarks suggest that more powerful EQS variants could be on the way, this time wearing AMG badges. Here’s what we think the Mercedes-AMG EQS Sedan(s) could be like.

Pictured above, we imagine the AMG EQS will feature more bold and aggressive styling, with a different grille design, new front and rear fascias, and sportier wheels with larger brakes. Should AMG decide to keep the EQS’s two-tone paint scheme, we’d expect to see some more expressive colors, like orange. AMG might make some other exterior changes in the name of performance, but we expect the EQS to remain close to its impressive 0.20 drag coefficient.

How it looks on the outside is less important than the battery power underneath. While the EQS 450+ and EQS 580 are no slouches, the AMG variants need to be even quicker. Mercedes has trademarked the names “EQS 53,” “EQS 55,” and “EQS 63,” so it’s currently unclear which ones will make it to production.

The gas-powered AMG models with the 53 nomenclature all produce 429 hp, which seems too low in this case, given the EQS 580’s 516 hp output. It’s been a while since AMG has used the number 55 on one of its products, so it’s anyone’s guess how much power the EQS 55 could produce. As for the 63 models, those all produce well over 600 hp, so we’d expect similar or greater performance out of the EQS 63.

When these AMG EQS variants arrive, they won’t be without competition, as there is no shortage of extremely quick electric sedans. The group includes the Audi RS e-tron GT, Porsche Taycan Turbo S, and Tesla Model S Plaid, to name a few. These vehicles can all achieve 0-60 mph in under three seconds, so the EQS 63 will need to be potent to keep up.