From 1961 to 1965, the Three-Pointed Star built more than 225,000 units of the W110 with a four-cylinder diesel that couldn’t do better than 54 horsepower from 2.0 liters of displacement. Of those cars, this fellow here is probably the only example of the breed with an M20 swap from a BMW.

The four-cylinder gasoline engine, as well as the four-speed automatic, come courtesy of an E30 second-generation 3 Series. Turbocharged to the tune of 9 pounds of boost per square inch, the force-fed motor has been modified by Bisi Ezerioha of Bisimoto Engineering for “good enough” horsepower and the maximum torque rating of the transmission. 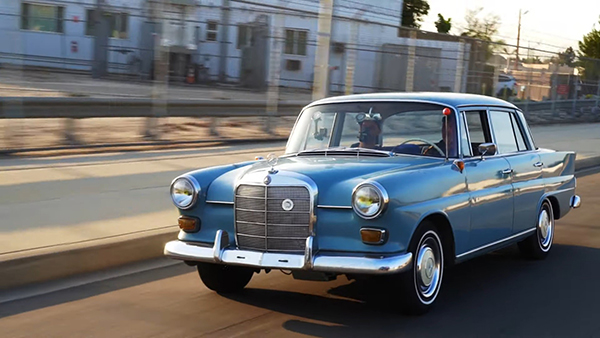 According to Tony, the owner of the one-of-a-kind build, this fellow was envisioned from the start as a reliable cruiser. Capable of 1,500-mile trips without skipping a beat, the W110 further sweetens the deal with a powder-coated intake manifold and valve cover featuring the Mercedes logo.

A 3.0-inch custom exhaust system designed to be as quiet as possible, the rear end from a W108, bigger brakes up front, and Air Lift Performance suspension are highlights in their own right, along with W108 wheels, whitewall tires, reupholstered seats, a new headliner, and new door panels. 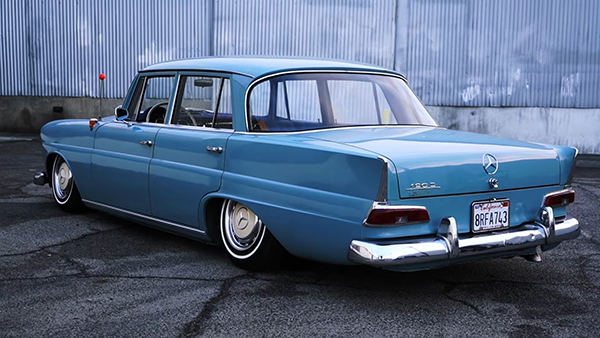 Despite the exhaust’s purpose, you can’t escape those turbo noises once you step on the gas because of the wastegate and blow-off valve. From the standpoint of sound alone, this unique Merc is very capable of turning heads. Showing restraint with the exterior design also gives this fellow true sleeper looks, and it’s a classy one to boot thanks to a certain design motif.

“The thing I love about these cars is the fin tails on them,” said Tony, and I couldn’t agree more. One of the most celebrated models from the Stuttgart-based automaker, the Heckflosse before your eyes hides the air tank, an air compressor, the 12-volt battery, and a full-size spare tire in the trunk.