There is a new generation Mercedes-Benz E-Class right around the corner, and we have new spy shots of it, which also happen to be the most revealing. 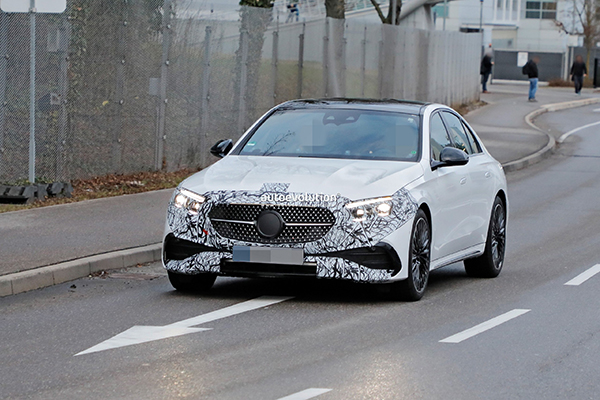 Looking more mature than ever, the 2023 Mercedes-Benz E-Class is one of the prettiest generations of the executive car from the Stuttgart brand yet. It looks like a proper rival to the likes of the BMW 5 Series and Audi A6, and the white paint finish combined with the black roof styling of the latest scooped prototype, as well as the multi-spoke alloys, give it a sportier stance.

The Russian doll design hasn’t gone anywhere, as from certain angles, it will be difficult to differentiate it from the smaller C-Class and larger S-Class. The car has a similar styling all around, and the same applies to the interior too, as it will have a dashboard panel akin to the ones of its brethren. Expect a large screen incorporated in the middle, as well as a new digital instrument cluster with a tablet-like shape, new three-spoke steering wheel, and the usual amount of gizmos normally found in an executive car, from high-end leather upholstery on upper specs, to ambient lighting, heated, ventilated, and massaging seats, lots of tech features, and a host of driving assistance systems.

It has been reported that the all-new Mercedes-Benz E-Class is underpinned by the MRA II platform, and that it will launch with several gasoline burners, with 2.0- and 3.0-liter displacements. Some of them, or maybe all, will be partially electrified. We don’t know yet if Europe will get a diesel unit, but we tend to think that an oil burner is possible, and if that is the case, then this will likely be the last E-Class to feature such a mill. As you can expect, Mercedes-AMG will launch different versions of the car, including the AMG E 63, which may or may not get the S E Performance moniker to highlight its electrified nature, because it will be assisted by electricity, to no one’s surprise, just like the latest C 63, which now packs a small 2.0-liter four-pot.

Replacing the W213 generation, which entered production back in 2016, and comes to life at various factories all over the world, including in Germany, China, India, and in other countries too, the W214 is probably a few months away from showing its uncamouflaged skin in an official environment. It should go on sale shortly after the grand unveiling, and will likely reach our shores as a 2024 model, perhaps with a small price bump. The outgoing E-Class is priced from $54,950 in the E 350 configuration, with rear-wheel drive, and it is also available in the E 350 4Matic, E 450 4Matic, and AMG E 53 versions.