Mercedes-Benz E-Class has a new generation on the horizon. In addition to the four-door sedan, a wagon variant is on the way. While we have earlier spy shots of the long-roof model, the car in this gallery is our first look at the plug-in hybrid model of the estate. 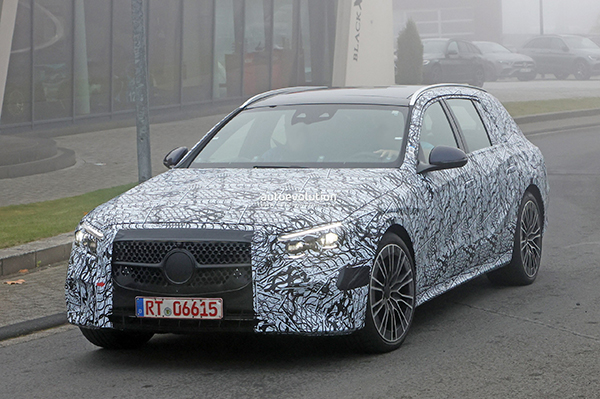 Aesthetically, the PHEV version of the wagon looks nearly identical to the purely combustion-powered variant. The only big tweak that’s visible here is the door covering the charger on the driver’s side rear fender.

The horizontal bar in the grille tells us this is a standard Mercedes-Benz model, not an AMG trim. Unfortunately, the camouflage hides most of the design details. There’s a glimpse of the headlights, which have a strip of running lights over the top. 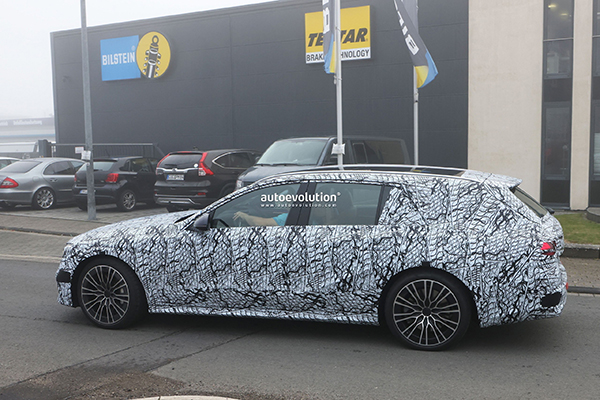 Mercedes tries to hide it, but the new E-Class appears to have an interesting look in profile. There are creased sections along the lower doors. This element kinks upward at the back to accent the rear fenders. We can’t see for sure, but the black roof on this car appears to be a panoramic roof.

The E-Class wagon obviously has a longer roof for creating additional cargo room in the back. This one has panels below the glass on the hatchback for concealing the production model’s shape. The taillights seem to have an intriguing shape with a curved section at the bottom. The rear bumper conceals the exhaust pipes, but spy shots show exposed outlets for the AMG models. 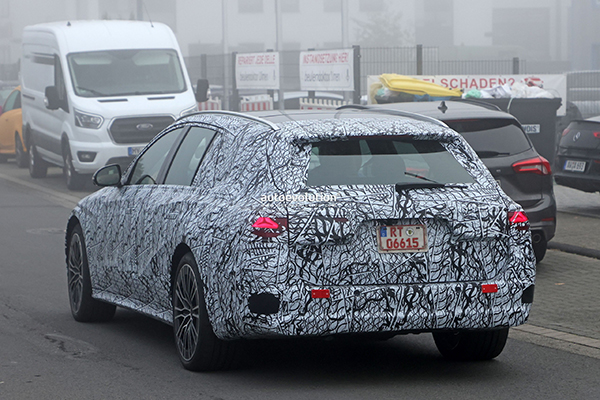 Glimpses inside of the new E-Class indicate there’s a digital instrument cluster and a portrait-oriented infotainment screen that sits at an angle on the center console. The black sections on the exterior cover various sensors, so expect the model to have advanced driver assistance tech.

E-Class buyers will have a wide range of powertrains to choose from. That will include mild-hybrid and PHEV choices. At the top of the range, there will be the E 63 with a plug-in 2.0-liter turbo making 671 hp (500 kW).

We expect the new E-Class to debut in the first half of 2023. It’s not clear whether the sedan and wagon would premiere at the same time. Generally, Mercedes gradually launches the AMG variants after the mainstream models. Also, the CLE-Class will be the replacement for the C- and E-Class coupe and convertible.