During the Industry Pool at the Nürburgring I have filmed the 2023 Mercedes-AMG C63 2.0T Hybrid continuous testing on track.

The original 2008 Mercedes-Benz C63 AMG will forever occupy a space in the automotive pantheon. With 451 horsepower courtesy of a 6.2-liter V8 under the hood, that C63 was a high-revving bahn-stormer. And for US consumers, it followed a very familiar hot-rodding formula – Mercedes’ largest-displacement engine jammed into its smallest car.

Since the first C63, the compact AMG flagship has gone through a few changes. The naturally aspirated V8 went away for the 2016 model year, replaced by a twin-turbocharged 4.0-liter unit that still produced more power and torque despite its lower displacement. Consumers didn’t care, and they lapped up every C63 they could find. Here’s hoping buyers will be similarly forgiving of the 2024 Mercedes-AMG C63 S E Performance, which goes even further in the pursuit of downsizing by lopping off half the cylinders – that’s right, this one’s got a 2.0-liter inline-four.

Fear not. In exchange for the displacement loss, AMG engineers gave the meanest C-Class a turbocharger with instantaneous electric spooling, as well as a rear-mounted electric motor and battery setup to add still more power. Now a plug-in hybrid, the 2024 C63 makes 671 horses and a staggering 752 pound-feet of torque. Not only are those best-ever numbers for a roadgoing C-Class, they’re among the highest of any AMG product in history. V8 who?

The figurative heart and soul of the Mercedes-AMG C63 is its turbocharged 2.0-liter inline-four, codenamed M139. Even without the help of the hybrid drive system, the internal-combustion engine makes 476 hp (350 kW), making it the most powerful production four-banger on the planet. As on the less powerful C43 model, the engine features an electrically driven turbocharger that reduces lag to almost imperceptible levels. Derived from Formula 1 technology, the turbocharger features a tiny electric motor between the exhaust turbine and the compressor wheel, which spins the turbo up to create boost as soon as the driver calls for it. 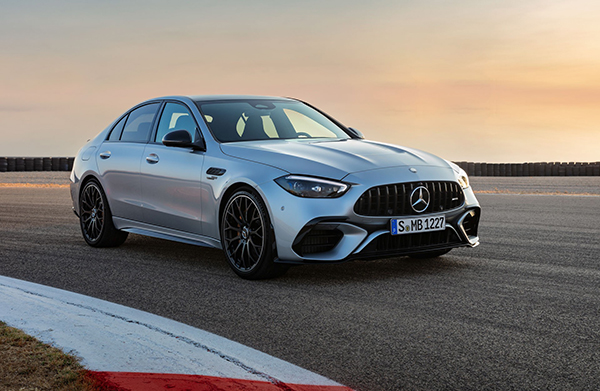 But while 476 horses might have been sufficient a few years ago, today’s super-sedan shopper demands more. That’s where the rear-mounted electric motor comes in. Working with a 6.1-kilowatt-hour battery and 400-volt electrical architecture, the motor pushes 204 hp (150 kW) to the road – either by itself or in tandem with the gas engine. In the former case, the C63 will be capable of about 8 miles of all-electric driving, but as AMG Chief Technical Officer Jochen Hermann said, the electrification strategy isn’t really focused on efficiency. Instead, this car is built to go fast.

With all cylinders firing and a peak 150 kW of electrons flowing out of the battery, the C63 produces that aforementioned 671 hp and 752 lb-ft, helping it hit 60 miles per hour in a manufacturer-claimed 3.3 seconds. That’s about half a second quicker than the outgoing C63, with a top speed that nearly matches its predecessor at 174 mph with an optional AMG Driver’s package – the old C63 S could hit 180 mph, but who’s counting? More important than ultimate numbers is the legendary AMG sound profile, and although the new C63 likely won’t have the road-ripping bellow of its predecessor, it should still be pretty emotive.

That’s because it features a number of audio tuning tricks, including a sensor in the exhaust that detects noise pressure, then enhances that through the stereo speakers for a more exciting soundtrack. Mercedes is quick to note that the sound that makes it into the cabin isn’t synthesized or altered, merely amplified, so the car will still sound like a turbocharged four-banger. If it sounds anything like the bat-out-of-hell CLA 45, the C63 will still be pretty exciting to rev out.