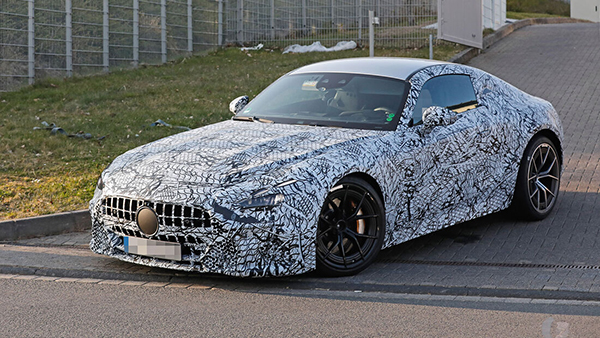 Mercedes is dropping the roadster version of the Mercedes-AMG GT to avoid competing internally with the Mercedes-AMG SL but will offer a new generation for the coupe. The second generation coupe will be based on the new MSA (Modular Sports Architecture) platform used in the SL.

Platform from Mercedes-AMG SL
Thus, the upcoming AMG GT coupe, codenamed C192, is developed entirely by AMG and is based on alu space frame structure reinforced with a mixture of steel, magnesium and carbon. Thus, the Mercedes-AMG GT does away with the transaxle system where the engine was located at the front and the gearbox was mounted at the rear in a common housing with the differential because in the new AMG GT the engine and gearbox are located at the front.

Mercedes has dropped the transaxle solution in order to offer all-wheel drive which will be standard. The drivetrain will benefit from an adaptive suspension with steel springs and active anti-roll bars. Also, the integral steering will be in the menu. The GT’s suspension is expected to be tuned even more firmly than the SL’s. Mercedes will position the upcoming Mercedes-AMG GT one step higher on the sportiness scale compared to the SL.

The interior will be similar to the new SL with the second-generation MBUX system and 11.9-inch portrait screen. On the outside, the coupe’s roofline draws a longer, sloping line that extends further towards the rear. Behind the door windows there will be a small triangular window. Otherwise, the GT will be similar to the SL. Slight differences in the radiator grille and headlamps are to be expected though.

V8 engines for sure, 4-cylinder possible
Like the SL, the upcoming GT will debut with V8 petrol engines. In 2014, the Mercedes-AMG GT was the first model to get the new 4-litre twin-turbo V8. Since then, this engine has been developed in numerous versions. In 2023 the GT will have 585 HP in the 63 version and 476 HP in the 53 version, both versions mated to the AMG Speedshift 9-speed automatic transmission.

Mercedes is positioning the GT higher than the SL and therefore may not offer the new 4-cylinder engine with electric turbo recently launched in the Mercedes-AMG SL 43. On the other hand, the GT will compete with the Porsche 911 and therefore having more versions and covering a wider power spectrum is beneficial. If Mercedes decides to use the 4-cylinder version, it is expected to have more power as the new electric turbo engine that will also be used in the upcoming C 63 AMG still has enough power reserves.