I have taken the first spy video of the next generation Mercedes-AMG GT during some public road tests near the Nürburgring. As you can hear in the video, the AMG GT as a 63 continues to use the power of a V8 engine.

Spotted in action earlier this week, the tester wasn’t eager to show any skin, as it had a thick layer of camouflage wrapped around its body. However, while the design part is still somewhat of a secret, the sound isn’t, because the 2:35-minute long footage embedded at the bottom of this story reveals some of it.

As you probably already know, the 2023 Mercedes-AMG GT will use the sonorous 4.0-liter bi-turbo V8. The engine, shared with the all-new SL, just like the platform, and other bits and bobs, is expected to have identical output and torque to the unit powering the roadster. 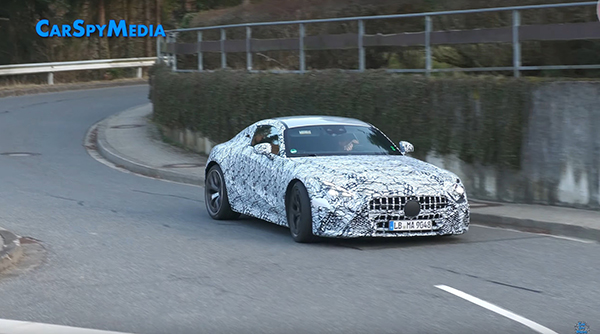 Visually, it will go down the evolutionary route. Some of the things that will differentiate it from the SL, besides the fixed roof above the passenger compartment, will be the grille, positioned lower, exclusive headlights, and new taillights. The wheelbase should have about the same length as the one of the current GT, and the cabin will likely be identical to that of the roadster. The unveiling date is probably a few months away, with some claiming that it might be shown either towards the end of the year, or in early 2023.