Following the recent debut of its even sportier SL roadster, Mercedes-AMG is gearing up to launch a more hardcore second-generation AMG GT. The Porsche 911 rival will be based on an all-new platform that it will share with the SL, with the new GT set to be positioned as an even racier version of the car it will replace. 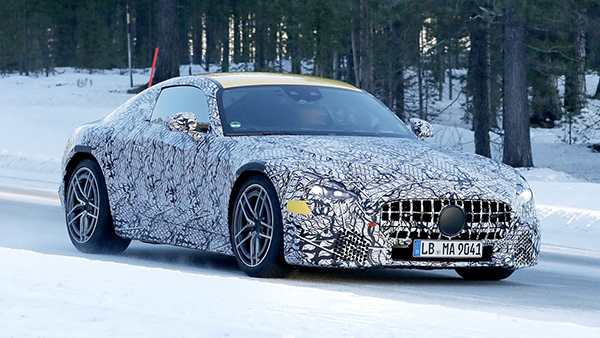 It’ll be powered by a familiar engine, in the form of AMG’s 4.0-litre biturbo V8. This could produce more than 600bhp in the GT 63-badged model, placing clear distance between it and the 63 version of the new SL; and, as has already been confirmed for that car, an E-Performance plug-in hybrid V8 version could also feature in the new GT line-up.

Thanks to the new aluminium-intensive MSA platform that has been engineered to accept Mercedes’ 4MATIC+ all-wheel-drive system, the next AMG GT is likely to break from the tradition set by the outgoing model and send its power to all four wheels. That should mean the car delivers a 0-62mph time that dips under 3.5 seconds.

As in other all-wheel-drive AMG models, the set-up will offer a more driver-focused bias, sending more power to the rear axle, and with the system’s parameters changing depending on the driving mode, boosting agility and stability. Expect rear-wheel steering, AMG’s Active Ride Control adaptive suspension and anti-roll tech too.

Our spies have already caught the new GT undergoing testing, and their shots show an even more aggressive profile, with a heavily raked rear screen. Some details are evident, such as muscular rear wheelarches and sleek proportions, including a long bonnet with AMG’s trademark Panamericana grille. Our exclusive image shows how these details could look in production form.

It’s expected that the next AMG GT’s interior will receive a complete overhaul too, potentially inheriting elements of the SL’s cabin, including an 11.9-inch touchscreen.

AMG’s Chief Technical Officer Jochen Hermann has already confirmed that the next GT won’t be offered in roadster form, with the new SL covering that market. It’s not known if the GT will inherit the SL’s 2+2 layout or if it’ll remain a strict two-seater.