Recently, a reader emailed to us some spy shots and a clip of what appears to be a partially camouflaged Mercedes-AMG GT Black Series. So, why is the model partly covered when the three-pointed star marque has already unveiled it earlier? 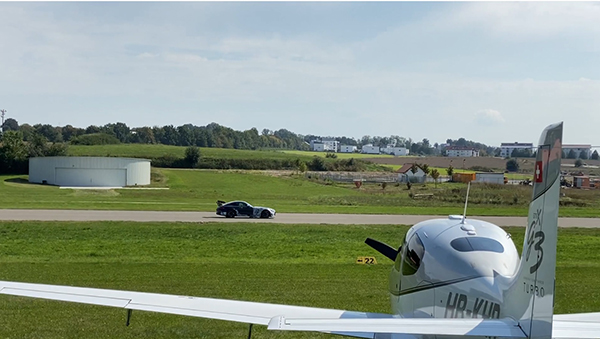 The low-resolution video and spy photos were emailed to us by Moritz Rossmanith. He claimed that they were taken at the runway of Biberach Airport in Baden-Wurttemberg, Germany. However, he didn’t mention additional details about the subject of the photos and video. He also said that he wasn’t sure what AMG was doing with it.

The car in question is unmistakably an AMG GT Black Series judging the layout of its body, particularly the front grille, scooped hood with air intakes, wide fenders, diffuser, large rear wing, quadruple circular tailpipes, and other distinct accessories found in the auto. It is possible that Mercedes is testing a new configuration for the model.

Months ago, we have witnessed a plug-in hybrid variant of the Mercedes-AMG GT 4-Door. Sources suggested that it might be called the Mercedes-AMG GT 73 4-Door as a homage to the 7.3-liter V12 engine of AMG found in the Mercedes-Benz SL 73 AMG and Pagani Zonda. Since AMG already retired the V12, the vehicle will come with an upgraded 4.0-liter twin-turbo V8 engine combined with an electric motor instead, and the car’s power is expected to peak over 800 hp.

Going back to the partially-wrapped AMG GT Black Series, there’s a probability that what we are looking at here is a plug-in hybrid build of the model that will serve as a bridge between its 720 hp version and the more powerful Mercedes-AMG Project One. It is hard to determine this fact though because we couldn’t see any charging port due to the resolution of the photos and video, and the distance they were taken.