While pricing for the regular AMG GT Black Series has not been revealed yet, it is believed the P One Edition costs an additional €50,000 or about $57,300 at current exchange rates. It takes inspiration from the Mercedes AMG F1 W10 EQ Power race car used in the 2019 F1 season, with a two-tone livery with teal accents inside and out as a nod to Petronas, the F1 team’s title sponsor.

If there’s one thing you should know about Manny Khoshbin is that he loves owning rare or unique models. And this Mercedes-AMG GT Black Series P One Edition definitely fits the profile. Produced in only 275 pieces, there’s also another catch: it’s only meant for people who have already purchased the much-anticipated Mercedes-AMG ONE.

Wearing an official AMG-Petronas Motorsport t-shirt and a Mercedes-Benz hat, Manny Khoshbin was ready to take delivery of his Mercedes-AMG GT Black Series P One Edition.

His model is also the first to hit the U.S. soil, because he’s Manny Khoshbin. When talking to the sales representative at Mercedes-Benz, he found out that there’s only one other order for another One Edition.

The P One Edition comes with a two-tone paintwork displaying silver and black stars that run from the front doors to the back. If it looks familiar, it means you’re watching Formula 1. That paintwork copies the livery of the Formula 1 Mercedes racing cars. There are also striking Petronas green accents on the wheels, side skirts, and on the backrests of the seats. 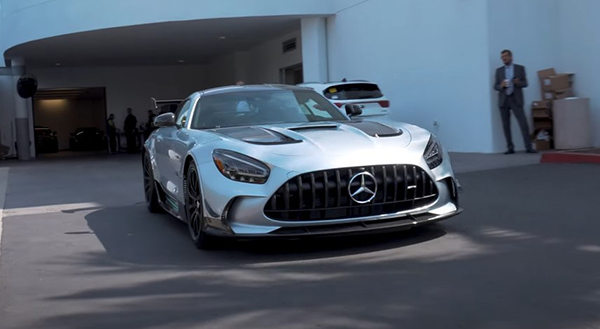 Before heading to see his car, Manny made a quick stop at a gift shop and enjoyed a coffee so he could be pumped up when seeing his new addition.

When he finally reached it, he said that it looked “ten times better in person than what you see on the web.”

But Manny Khoshbin surely is impressed, and vows to “take it to a track one day.” We hope he’ll film that, too.