There used to be hot-hatches, but now there are hot-hatches and then these. Call it a hyper-hatch or something else, but the A45S is the latest of a new breed of car – one with the dimensions of a hatchback but the power, engineering, and price tag of something more like a C63 S. 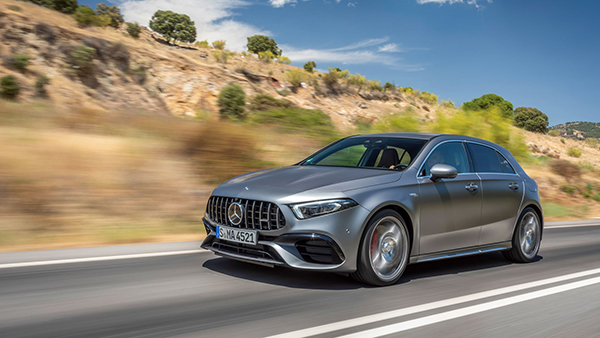 Best hot hatch
Sitting above the already-potent A35, this A45 sits in a rarefied space with only the equally silly Audi RS3 and new M2 (so far) to keep it company. So, with the Mercedes-AMG A35 already available for a mere £35,000 (plus ten grand’s worth of options, natch), what’s a Mercedes-AMG A45 S got to offer to justify its £15,000 hike in starting price (plus… etc.)?

Other than that, there’s an infotainment system of enough complexity and software breadth to make you hoot with delight or howl at the moon, depending on what you buy a very fast hatchback for (which we’ll come to).

Oh, yes, and attached to some extremely trick mechanical engineering in the undercarriage department, there’s also the world’s most powerful turbocharged four-cylinder engine in series production.

Tell us about the A45 S’ engine then?
This sounds like the cue for the old Formula 1 technology plug – and it is. Indeed, along with other associated slaver-worthy stuff such as ‘motorsport derived’, ‘closed-deck construction’, ‘hand-mad’, ‘one man – one engine’, ‘NANOSLIDE-coated cylinder liners’ and ‘all-aluminium crankcase’.

This new unit shares the A 35’s 1991cc cubic capacity and transverse mounting but, other than that, precious little else – even having been installed 180 degrees the other way round for better ducting of both intake and exhaust air. Though that does sound like an admission that the A 35’s unit is the wrong way round… 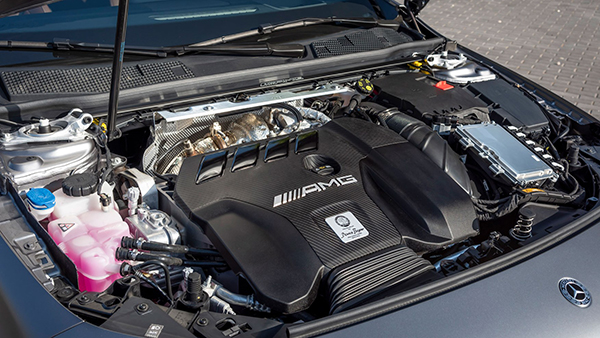 And how fast is it?
Anyway, anything and everything under the bonnet has been meticulously, painstakingly fettled to the point of delivering 415bhp at 6750rpm and 368lb ft of torque at around 5000rpm. And when married to an eight-speed dual-clutch transmission and four-wheel drive, this translates into a quoted 0-62mph time of 3.9 seconds, and 167mph some way down the road.

Those are silly numbers in any car, but in that’s looks a little like a family hatchback they’re truly silly/impressive – delete as appropriate.

The + tacked onto the all-wheel drive system’s 4MATIC nomenclature stands for a new rear axle differential boasting one multidisc clutch for each rear wheel. This means that not only is torque automatically shunted up to 50% fore and 100% aft, but also up to 100% from side to side astern.

This cunning installation equips the A 45 with one more driving mode than lesser models – Drift. 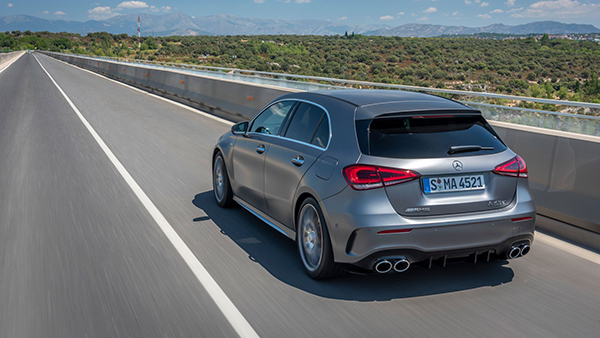 So what’s it like to drive?
Somewhat marvellous, actually. You only really need two of the seven driving modes on offer; ‘Comfort’, for bumbling about, and ‘Sport +’ for hooning. In the former, every parameter from the frequency-selective shock absorbers to the throttle, gearbox and steering are slackened off to just a whisker short of bagginess, which is ideal for mulching about in urban mayhem.

But dial in the latter and everything mechanical sits up straight, clenches its stomach muscles and pays attention. The eight-speed dual clutch transmission remains appropriately oleaginous under paddle control, only occasionally delivering the hint of a head-nod nudge as you close on the rev limit in each gear.

Which, with increasingly relentless fervour, you will do, not only because there’s precious little torque on offer below 3000rpm (even in this up-and-at-’em drive mode), but also because, under pressure, this is one of the best sounding four-cylinder units around – an enthusiastically waspish exhaust note worth chasing, and all the requisite small arms fire you could wish for on overrun.

Imbued with a little extra heft, the steering is pleasingly meaty and ruthlessly accurate, communicating a whiff more about what’s going on under the front tyres than expected. And cornering is a guinea a minute…

With inner rear braking intervention tucking you into bends and optimum torque distribution chucking you out, the limits of twitch-free, lean-on-the-outer-rear-as-hard-as-you-like cornering seem constantly just out of reach. Push harder, and harder, and harder, and those clever mechanicals just go ‘Oh, OK’, allowing you back on the throttle absurdly, and increasingly, early as faith in grunt-allied grip grows.

Smooth Spanish tarmac makes a poor jury when it comes to ride quality adjudication, so all that can be reported at this stage is that the ride is acceptably pliant in bumbling mode, toughening with every rung of the drive mode ladder climbed. The extent to which fillings are threatened on our hopeless UK roads remains to be seen… 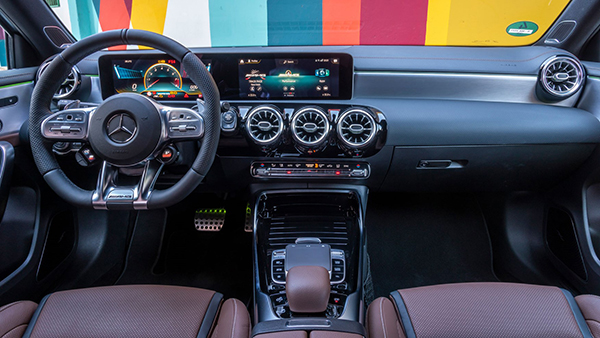 And the A45 S interior?
Much like an exterior design which mixes standard A-Class fayre with the face of a man reaching his limits in a NASA centrifuge, a mixed bag.

Despite protestations from some that the A 35’s driver’s seat is set too high, I find the driving position in the A 45 S to be absolutely fine. The helm could adjust a tad further south, but the seat’s comfortable and supportive, and all ergonomics first class. And there’s adequate room for a brace of six-footers in the back, though in CLA guise headroom is distinctly limited.

Twin 10.25-inch screens presented as a high-gloss pizza chef’s paddle chopped into the dash-top in lieu of a properly cowled instrument binnacle are all very well, and do boast excellent graphics. But they lay the foundations for a software quagmire of Glastonbury-esque platform and content complexity.

Control systems in triplicate may be reassuring aboard an Airbus, but give off a strong whiff of overkill to those flying at ground level. And over and above the inevitable drive mode and undercarriage selection systems, the surfing of screen after screen after screen unearths the endlessly adjustable parameters of myriad Stuff You Didn’t Know You Needed.

Apparently, the Chinese love this sort of thing, but those of us who have no time to spare for glancing at G-force metres and stopwatches when pressing on find it, at best a distraction, and, at worst – when the absence of a simple button means menu surfing merely to disengage the loathsome and steering-corrupting lane keeping assistant every time you start the car – increasingly irksome.

Dig deeper and you’ll also find Track Pace, an AMG-designed app to make your driving better and help you unlock more of the A45 S’ performance. Easy to set up, it requires no third-party tech to set up everything from drag races, circuit work and drifting – and it uses the A45 S’ vast swathes of screen to do it. Those truly into the data can later browse through telemetry using a smartphone or tablet – just like an F1 driver… sort of.

Mercedes-AMG A45 S: verdict
With cars like these, there’s no point starting with why – it’s best just to go with how – and is it worth the cash? Starting at £50,570 for the hatch the A 45 S is not a cheap offering. Unlike its predecessor, however, it does at least seem worth it; at least for the fabulous engineering and terrific dynamics. As for the interior tech? Some will take it or leave it, but the benefit of MBUX – and Track Pace – only adds to the package.