Mercedes A-Class might be getting ready to exit the U.S. market after 2022, and Canada in 2023, but it’s still a key weapon in the company’s battle against Audi and BMW in other countries, and an upcoming refresh currently being tested will keep it competitive through to the second half of the decade.

Our spy photographers have caught the sporty AMG A35 and red hot AMG A45 hot hatches, plus the more sober Mercedes A-class hatch and sedan models being put through their paces in a variety of countries and conditions, from snowy Arctic environments to the twists and turns of the Nürburgring.

The presence of the Panamericana grille and four rear exhaust tailpipes tell us the black hatch is the range-topping AMG A45, rather than its A35 little brother, which we see here wearing silver paint. Neither car, or the regular A-Class sedan will look hugely different post-facelift, but from what we can see under the disguise, they seems to be wearing subtly revised lights at both ends, with a new DRL shape at the front. 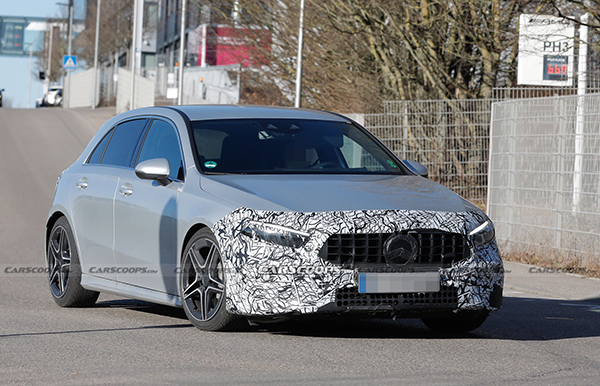 The A45’s alloy wheels also feature an unusual inner ring design, while the heavily disguised grille on the silver A35 makes us wonder whether it might also get the Panamericana grille this time around.

We’re not expecting to see any huge changes to the 2.0-liter turbocharged inline-four, or the 4Matic all-wheel-drive system of either AMG, particularly since the current A45’s 415 hp (421 PS) output already makes it more powerful than the 394 hp (400 PS) Euro-spec Audi RS3 Sportback. But don’t think for a minute that Mercedes won’t take the opportunity to push those numbers a little higher. 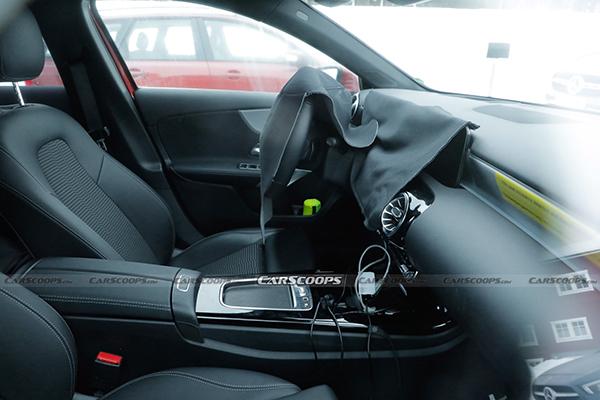 While the mass-market A-Class sedan our pictures show chugging its way around the Nürburgring might not share the kind of pulse-quickening performance its AMG brothers will deliver, the one thing all three cars have in common is the loss of the MBUX infotainment system’s trackpad.

By asking the driver to operate the system through a combination of voice commands and finger dabs on the screen, engineers have freed up space for what could be a wireless phone charging tray relocated from the other side of the twin cupholders, though we’re not sure what happened to all of the buttons that used to surround the trackpad.

The facelifted Mercedes-Benz A-Class range, including the AMG variants, is expected to debut later in 2022, and be in showrooms before the end of the year.